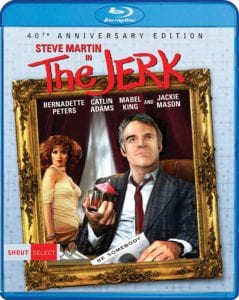 This year marks four decades since Steve Martin and Carl Reiner’s The Jerk hit theaters and showcased the young comic’s skills. If, like me, you have fond memories of catching this one on HBO multiple times in the 80s, you’ll want to get this new Select Series Blu-ray from Shout! Factory. It features a remastered copy of the movie from a 2K transfer along with 50 minutes of new bonus features. 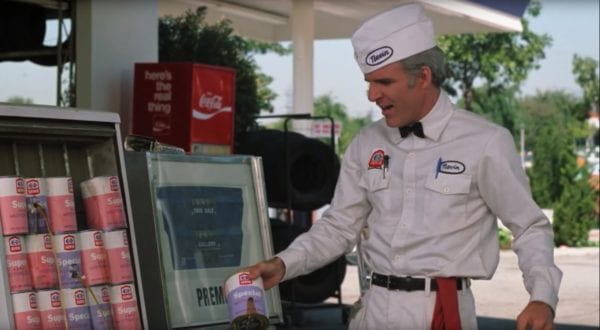 Shout! Factory’s Select series rolls on with another classic from a previous era: a 40th Anniversary Edition of Steve Martin and Carl Reiner’s classic The Jerk. Martin was a big name at the time, and this was his feature film debut after elevating his career through stand-up and appearances on Saturday Night Live. My 16-year-old daughter doesn’t know a lot about Martin, but she sat down with me to watch this one and laughed throughout, so apparently it can still resonate with today’s audiences.

Martin’s character in this one, Navin R. Johnson, was inspired by a line from his stand-up act: “It wasn’t always easy for me; I was born a poor black child.” Johnson is raised by a poverty-stricken African-American family of sharecroppers in the South. When he discovers an urge to dance, he sees it as a calling and decides to hitchhike to St. Louis; his first benefactor says he can take him “as far as the end of this fence.”

Navin becomes a gas station attendant and is thrilled with his accommodations in a supply room. A chance meeting with a customer whose glasses keep slipping off leads Navin in his childlike innocence to invent a device that will prevent that from happening. The man says he’ll try to market the invention and promises to split the profits with him if it’s successful.

Navin later joins a carnival and falls in with a female daredevil who has a punk rock vibe. Her abuse leads him to date a sweet woman named Marie (Bernadette Peters), who leaves him due to his financial instability. But when he becomes rich from the glasses device, Navin tracks her down and they marry.

Unfortunately, there’s a flaw with the “Opti-Grab,” as it’s known, and a class action lawsuit leaves Navin destitute. (Director Carl Reiner plays a role as himself, the lead plaintiff in the lawsuit.) Don’t worry, though – this is a “rags to riches to rags to, through a twist that isn’t hard to see coming, riches again” story. 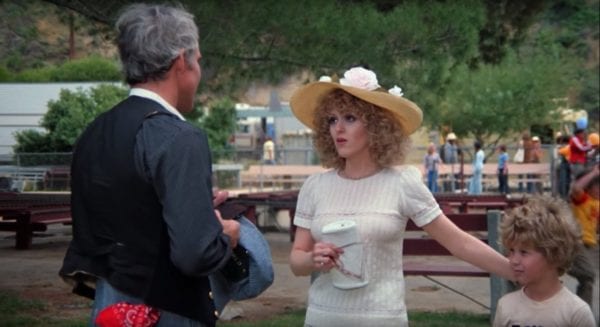 Think of Navin as a coarser version of Forrest Gump. He calls his dog Shithead after a suggestion from a bystander and quickly discovers sex and alcohol during his time away from his family. Martin plays the character with his trademark knack for physical comedy, letting us laugh at Navin while feeling sympathy for him. Bernadette Peters proves to be the perfect straight woman for his comedy (they were dating at the time, which probably helped) — if I see any flaw with this movie, it’s my feeling that her character should have been introduced sooner.

This Blu-ray from Shout! Factory features a remastered copy of the film from a 2K transfer, along with 50 minutes of new bonus features. The first one is a 26-minute conversation with Martin and Reiner during which they reminisce on the making of the film and what was happening in their careers back then. They reveal plenty of interesting fun facts about The Jerk, such as Reiner and Martin’s private agreement to have the actor lick Bernadette Peters’ face rather than kiss her in one scene, which created an authentic surprised look on her face (luckily, she stayed in character).

The other new bonus piece is a 24-minute discussion with writers Carl Gottlieb and Michael Elias, who collaborated with Martin on various drafts of the script. Gottlieb had worked on Jaws, but as he explains, he didn’t want to be typecast as a horror writer, so this was a chance for him to show what he could do with a comedy. Elias stepped in after Gottlieb had taken some shots at the script and brought it over the finish line.

Both of them remember what inspired the story, starting with Martin’s line from his stand-up act and including such sources as Charlie Chaplin, whose own bumbling, naïve character wandered from one encounter to the next and somehow came through the other side despite the problems thrown in his path. In the interview with Martin, he also references Dostoyevsky’s The Idiot as a source of inspiration. (I’ve always loved him because he’s not afraid to be silly and ridiculous but can also switch gears and go highbrow.) 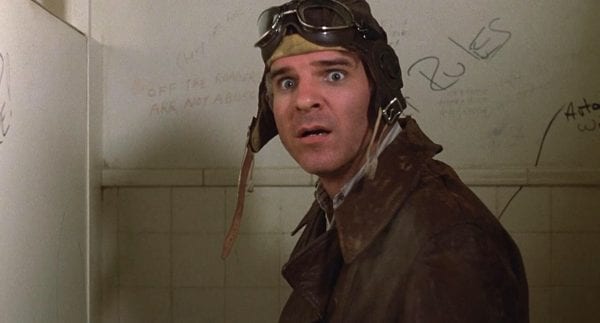 The rest of the bonus features were recycled from previous home video releases of the film. One of them is a seven-minute lesson on playing the song “You Belong to Me,” which Martin and Peters sing, on the ukulele, which Martin, incidentally, is quite good at. Another is the four-minute The Lost Film Strips of Father Carlos Las Vegas De Cordova, which is a longer version of the behind-the-scenes expose of cat juggling shown in the movie. It features such heinous acts as “fish teasing” and “plant abuse” and seems to have been created by Universal for a previous home video release.

A batch of trailers and radio spots round out the platter.