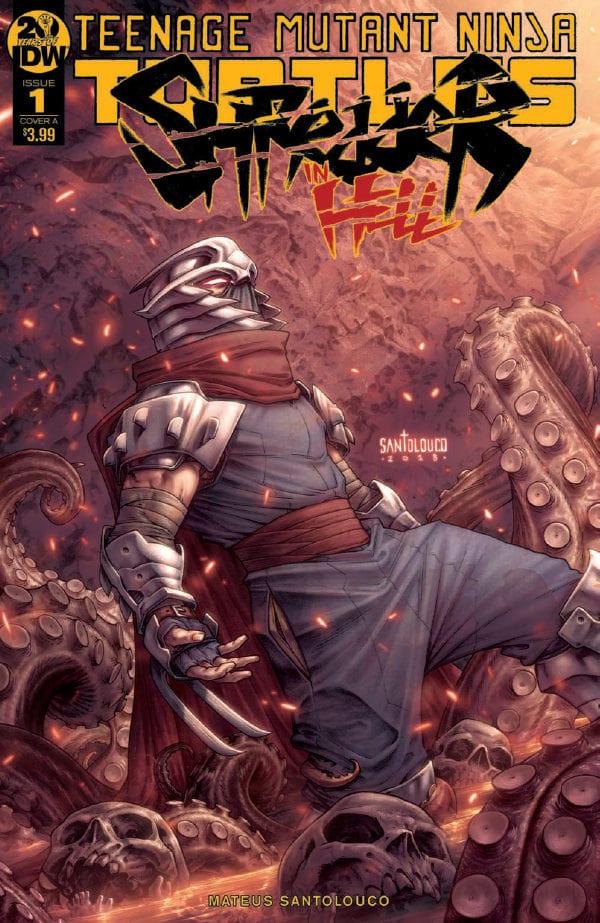 Part love story, part drama and part horror, Shredder in Hell is a story that follows Oroku Saki who is in the crossroads in the afterlife. After being resurrected by his love interest, Kitsune who is an immortal being herself —  decides to use her powers to bring him back to life.

Saki encounters Yoshi in his Master Splinter form, who always seems to want to guide him to a more peaceful, eternal path. Saki will have to battle his own egomaniac persona, better known as Shredder who has a history of ridiculing Yoshi for being weak and empathetic. Saki and Yoshi revisit their on and off again relationship prior to their Master Splinter and Shredder identities where they were best friends, who regularly called each other brothers. Yoshi tries to convince Saki to not succumb to his urges which are to control everything and everyone but his pleas are starting to fall on the deaf and stubborn ears of Oroku Saki.

Saki’s reasoning for making the decision he makes is a pleasant surprise from the typical Shredder we are used to in a TMNT comic or show. Even in the face of death, Master Splinter shows Shredder empathy and wants to be his moral compass as he entertains the possibility of immortality and world domination.

Shredder is met with his biggest battle yet.  Fighting the corpses of his enemies who are fueled by hatred is harder than Saki anticipates, especially when some of his dead enemies are some of the most powerful warriors he’s ever had to fight.

Shredder in Hell is a dark TMNT story that shows the continued inner conflict Saki has within himself. Shredder in Hell showcases Saki’s softer and vulnerable side before he walks on the dark side.