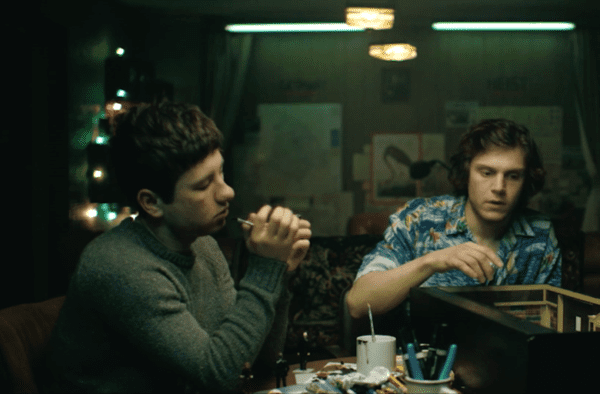 If I’m remembering correctly. I don’t think we see the real Betty Jean Gooch [The inadvertent victim of the heist] until the very end of the film.

There’s a flash of her earlier on. A small moment when they’re doing the planning and sitting around the model. Warren is explaining how it’s going to go down and he describes how they’re going to neutralise Betty, and there’s just a split-second where you see the real her taking a sip of coffee. We don’t introduce who she is or anything. It’s just a glimpse.

And what motivated the decision to withhold her, other than for that brief moment?

Well I did a long interview with BJ. She’s a very, very smart lady and she was able to brilliantly articulate the horror of her experience. But when you saw her talking with that hindsight, you could tell that she’s very together and that she has, at least on the surface, put the experience behind her. So I didn’t think that it would be helpful to us dramatically. We wanted to leave the question open as to what actually happened to her. Because we leave her bound and gagged and there’s no guarantee that she didn’t have a heart attack.

I suppose if we saw the real Betty earlier on in the film, then it would kind of defuse the tension of the heist sequence, as we’d know that she emerged okay.

Exactly. So I think it serves a dramatic purpose, as we’re left wondering what happened to her. And then ultimately it seemed appropriate to give her the last word. Which is why we drop her interview in at the end. 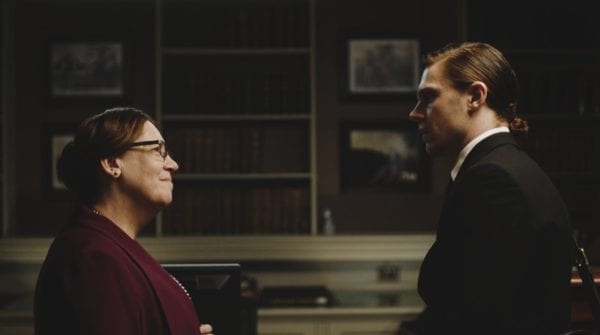 I was hoping to ask you a little bit about the pre-production and writing process here. Because I read somewhere that you recorded the  interviews a while before shooting the reconstructions? Was there like a year long gap between them?

Probably a little less than a year actually. As for how we wrote it, I did the first draft based on the letters and phone calls that Poppy Dixon and I exchanged with the guys whilst they were in prison. And so I wrote the real voices into the script with the expectation that, when we got into the actual interviews, they would say something that might be a little different.

They did and then they didn’t. You want to be very careful not to feed them lines, even if they were lines that had originally come from them. Because then the very thing that they are there for, which is to give you a sense of authenticity and reality, suddenly disappears and you begin to question if it’s all staged or if they’re actors.

So in the end, I went back to the drawing board and did the interviews with them in the way that I would for any documentary. As if I didn’t know the story and hadn’t already spoken with them beforehand. Then I had to pause the production, so that I could rewrite the script around those interviews and what they ended up saying.

Did you have to make any significant changes during that rewrite?

I would say there were lots of small-to-medium changes that added up. But it wasn’t like I found out completely different information or anything. What I didn’t realise however was the depth of their remorse, particularly for Warren. People have suggested that maybe he’s crying crocodile tears at the end, but I definitely didn’t feel that at the time and I was surprised by just how terrible he felt about what he had done. So I knew that obviously needed to be woven into the movie.

The other thing [for the rewrite] was that, when they got caught at the end, I didn’t really realise how much of a relief it was for them-

Yeah, I hadn’t anticipated that they were going to be kind of desperate for it all to stop. It’s like Crime and Punishment. They were living with this huge hammer hanging over their heads and this terrible sense of conscience. And that’s why we wrote the [arrest sequence] with a relief theme, as opposed to an action theme. 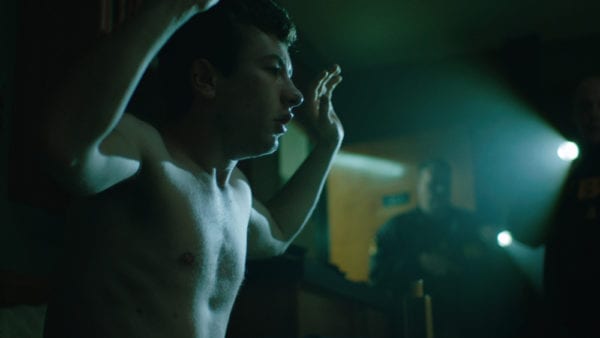 Another thing that really stood out was that the visual style of the film changes when they cross that line you referred to earlier. And I thought that was a really smart device.

Yeah, I wanted the audience to go on a similar journey with [the thieves]. That meant that – as they got more seduced by the fantasy and began to enjoy it more – then [the audience] would have a comparable experience. That we would start to play with the tropes of the heist genre that we are all familiar with. You know,  ll that fun stuff: whip pans; split-screens; a kicking soundtrack. We’re enjoying it in the same way that they are.

But the when the line gets crossed, it becomes this other thing and it starts to feel more documentary like. It’s all handheld, high shutter speed and quite hard to watch. All of that was very carefully planned so that we are kind of forced back into something that more closely resembles reality. I try to apply this to whatever film I’m making, you know: ‘’can we find a grammar to the film-making that mirrors the narrative’’.  If that makes sense?

It does. I know that you asked the actors not to interact too much with their real life counterparts. Why was that?

I think it was that I didn’t want [the cast] to feel too responsible for these guys. I didn’t want the real guys to dictate or inform the way in which they were going to be portrayed. As you’ve seen they’re all quite likeable, so I could imagine the actors getting to know them and thinking, for instance, that they can’t portray them to be too violent or whatever. I didn’t want them to worry about that, in the same way that I wasn’t concerned with them being lookalikes. 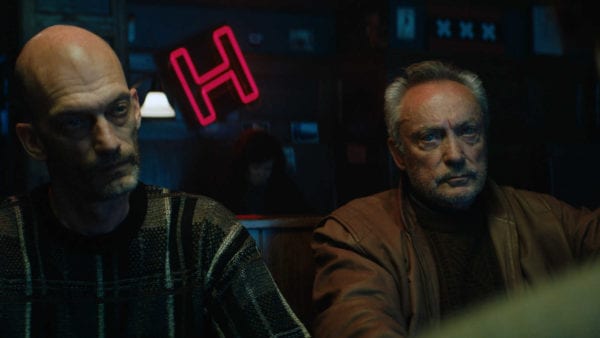 Finally, I was really curious about a specific image in the film. Towards the beginning you have this inverted establishing shot, showing the town from an upside down perspective. What was the intent behind that?

Well before I tell you, I’m interested to know what was your reaction to it. What did you take from that image that you might not have done were it the right way up?

I think it tapped into how the film was going to be exploring different viewpoints and how our perspectives can be altered by memory or time.

Yeah I think you’ve probably answered it better than I could have. We were just introducing this idea that we’re going to be looking at things differently. Also there was something about how, if you look at those images the right way up, then they are very mundane. They depict a very normal landscape that is pretty common in America. For us Brits there’s kind of a romanticism to it, but in reality it’s the same as every small town in middle America.

By turning it upside down, we were just putting the audience in a place where they’re going to have to concentrate a little bit harder and prepare for how we’ll be turning things on their heads. But yeah, I think your reading was great.

Thank you. And thank you very much for doing this as well.

No, it was a pleasure man.

Many thanks to Bart Layton for taking the time for this interview.

American Animals is released on DVD and Blu-Ray on January 14th.