Lee Israel (Melissa McCarthy) is a biographer who has fallen on hard times. Cantankerous, talented but defensive she hides behind her work, shuns publicity and holds others responsible for that misfortune. Following a chance encounter with Jack Hock (Richard E. Grant) and certain celebrity letters her luck begins to change… 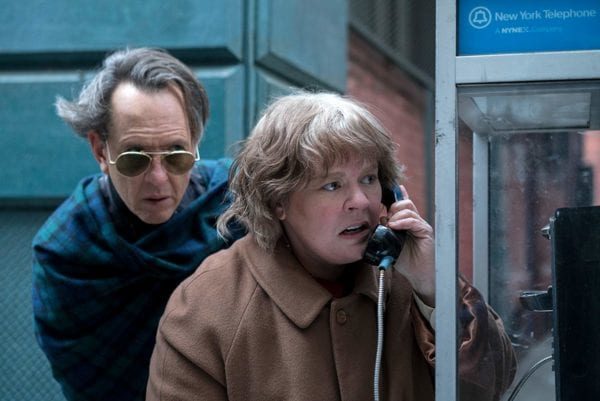 Melissa McCarthy has always been an acquired taste for some and in the main this has left her in no man’s land. Comedy slapstick, mistaken identity capers and the large lady who gets the laughs seemed to be her lot until now. Can You Ever Forgive Me? changes all that providing her with an opportunity to instil drama, pathos, reality and heart into a role for perhaps the first time. In Lee Israel we have a decidedly unlikeable, foulmouthed, hard drinking author who only has time for her cat. Dressed like a bag lady, living in disorganised squalor and shut off from a wider world Lee has few redeeming features. Which is where director Marielle Heller works some magic alongside McCarthy in creating that change.

Her journey from curmudgeonly alcoholic into productive forger of celebrity anecdotes is peppered with harsh language, ill conceived notions of literary greatness and no end of chemistry between herself and Richard E. Grant. For his Jack Hock may well channel moments of the mighty Withnail but there are more than a few additional shades which have been lavished on this heartbreaking creation. Unashamedly flirtatious, achingly aware of his fading appeal yet unrelenting in the exploitation of it, their relationship provides a solid foundation for everything else to rest on. 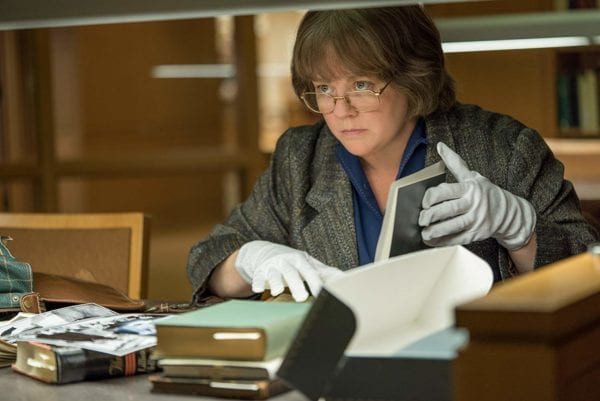 Here are two hustlers at a loose end looking out for themselves and blatantly celebrating an ability to grift their way through life. There is no glamour to be had, no plaudits to be enjoyed or moments of respite here as both Israel and Hock are on a downward trajectory. Yet beyond the diabolical behaviour, disreputable mannerisms and scant regard for themselves, each other or a wider world both remain likeable and self-aware. Richard E. Grant and Melissa McCarthy imbue these people with real flaws, tangible foibles and more layers in a single moment than some manage across an entire motion picture. That is where the real power of Can You Ever Forgive Me? comes from and may mark a truly transformative moment for both actors. Grant is already experiencing a career renaissance while McCarthy may yet surprise us further with future film roles. If she is remembered for only one film it should be this as her naturalism on screen is both a revelation and pleasure in equal measure.