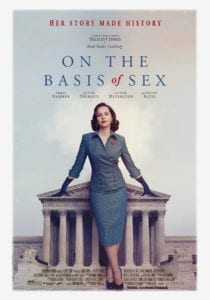 The true story of Ruth Bader Ginsburg, her struggles for equal rights, and the early cases of a historic career that lead to her nomination and confirmation as U.S. Supreme Court Associate Justice.

On the Basis of Sex is a timely telling of an inspirational true story, that of Ruth Bader Ginsburg (Felicity Jones), the second-ever female justice of the U.S. Supreme Court and a feminist icon. It both demands and earns its place on the screen.

With all the upheaval in both international and – more specifically, for here – American politics, a no-nonsense, hard-working and liberal icon such as Ruth Bader Ginsburg being made the star of her own biopic is a welcome distraction.

In defence: Felicity Jones gives an, overall, fine performance as Ginsburg, although it can be a little difficult at times to see real vulnerability and openness from her on the screen. This could certainly, in part, be attributed to Ginsburg’s steely yet shy persona. It is her quiet yet dogged determination, after all, in the face of constant obstacles and under-estimations that has allowed her to reach the pinnacle of the American legal system. There is also the odd moment when Jones’ accent slips, and it is difficult to tell if she’s achieved the Brooklyn twang she’s probably searching for, or if she’s just dropped an English vowel. 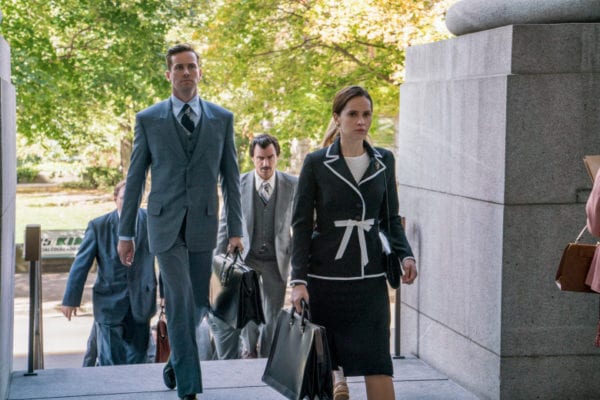 One of the best aspects of On the Basis of Sex is that it doesn’t shirk the less glossy parts of RBG’s life. It’s certainly far meatier for the fact that it concentrates on the difficulty she has – both at home with her strident daughter Jane (Cailee Spaeny) and in court – with being ‘likeable’. This still seems a rather pertinent topic (sadly), and runs in an interesting parallel alongside all of the sexism Ginsburg faces throughout her career. From the face-slappingly-obvious when she’s berated for taking the place of a man on the Harvard Law course (alongside seven other women in an intake of 500, how dare they) to the difficulty she faces trying to find her first job: She may have graduated top of her class at Columbia, but at the end of the day wives will just worry about their husbands at work if there’s a lady lawyer in the office…

Armie Hammer plays the most wonderful role of Ruth’s husband, Marty Ginsburg. Gregarious and friendly, his sociability is at odds with Ruth’s far more reserved nature – but opposites attract. The most extraordinary thing about Marty was his position as a supportive husband looking for an equal partnership with his wife from the 1950s onwards, far before that was the norm. Some have argued that his role in On the Basis of Sex seems underwritten; the point to actually make is that his role would normally be that of the wife. And ‘supportive wife’ is a perfectly enough fleshed-out role for countless actresses in countless films before this one. It seems like RBG hasn’t quite managed to stretch her persuasion over the equality of the sexes as far as Hollywood then – yet.

Justin Theroux also gives an enjoyable turn as the passionate and intensely-bouffanted Mel Wulf, RBG’s friend/adversary at the American Civil Liberties Union, where Ginsburg eventually founds the Women’s Right’s Project. He has been cast quite against type here, but proves that he has energy and commitment enough to make a fine character actor.

Costume designer Isis Mussenden must have had great fun dressing Jones in fashions from the 50s through to the 70s, particularly when the natty Ginsburg is now fondly known for her trademark jabots. There’s a particularly striking moment, at the opening of the film, when Ginsburg is being swept into Harvard on her first day as a law student, wearing a vivid turquoise-blue jacket and dress, surrounded by a sea of black and grey suits. This speaks volumes on the film’s context stylishly – if not subtly.

Now for the prosecution: It would actually be rather difficult to bungle the biopic of such a fascinating figure, who’s responsible for much of the social advancement towards equality between the genders over the past 40 years. Therefore, it can feel at times as though it is really Ginsburg’s life that does the majority of the heavy lifting with this film. There’s a standard biopic formula that’s being adhered to, and although the screenplay is certainly decent, there’s not much room left for surprise or individuality. Perhaps it’s almost more difficult when the material is already so good? Having said this, structure-wise screenwriter Daniel Stiepleman makes the very sensible decision to not try and cover the entirety of Ginsburg’s life – he instead focuses on her struggles and the time it took for her to get going on her path towards smashing the ingrained patriarchy. On the Basis of Sex ends – *spoilers* – with RBG’s first victory in court, which would pave the way for her life’s work. It should also be noted that Stiepleman is Ginsburg’s nephew, and this is his first screenplay. Taking that into consideration, he has produced an impressively serviceable screenplay.

Finally, RBG herself clearly approves as we’re treated to a glimpse of her at the end – and if you know anything about her, she won’t put her name to anything with which she isn’t entirely satisfied.