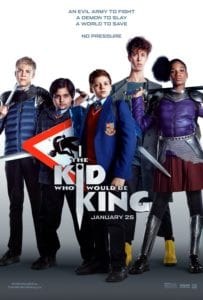 A band of kids embark on an epic quest to thwart a medieval menace. 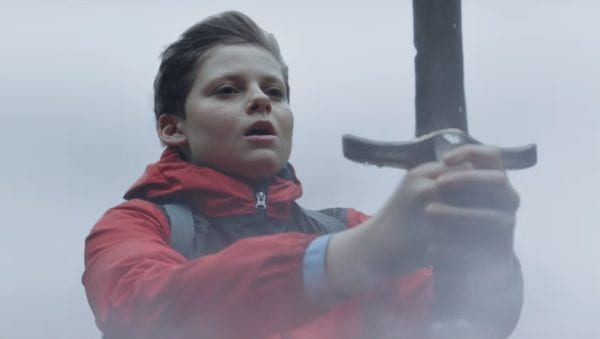 Separating writer/director Joe Cornish’s (Attack the Block) first foray into kids-oriented filmmaking (and general blockbuster filmmaking) is that, unlike most offerings from the genre, The Kid Who Would Be King goes about treating younger audiences with respectful intelligence alongside its rather cliché narrative about togetherness and being yourself. Before the legendary Excalibur is pulled out of any stones, we see these children commuting to school and partaking in their daily routines, consistently overhearing negative news briefs about a divided United Kingdom. And while polarizing events such as Brexit are not explicitly mentioned, most children should be able to pick up on the real-world comparisons, including American ones considering the division there is probably even wider.

Admittedly, some of this works and most definitely serves its purpose as another well-meaning life lesson for young moviegoers, but there are also elements involving the disappearance of Alex’s (Louis Ashbourne Serkis, the son of talented motion-capture performer Andy Serkis) father that could have been stronger inserted into the story. The revelation comes more like an unexpected and disjointed tonal shift rather than registers as anything emotional, although it’s always clear and justifiable why it’s there. It also doesn’t help that instead of using this truth as a momentum builder to the climax, The Kid Who Would Be King goes on for roughly another hour, including a completely unnecessary final battle that comes long after the initial charm and endearing camaraderie between these kids have worn out its welcome.

Opening up with a beautiful animated segment running through the most memorable beats of King Arthur and the Knights of the Round Table, The Kid Who Would Be King chooses to stick to the source material while also retelling these familiar bits in new ways in a decision that pays off due to the direct connection between the film’s themes and these altered plot points. It’s also a nice touch that a movie about finding common ground with others and turning your enemies into friends contains a cast of children that are a diverse bunch coming from different backgrounds. The film never addresses racism at all, but it’s not necessary to make the point of less hate and more friendship. 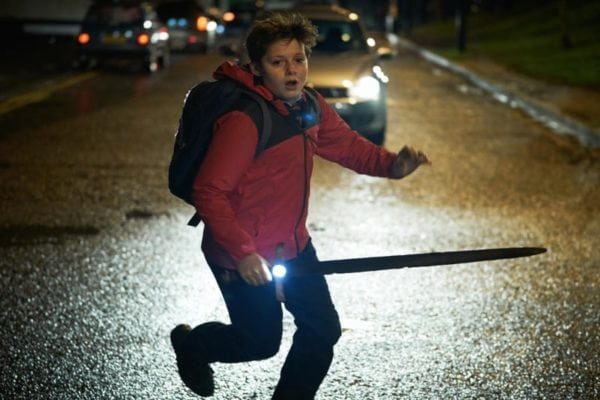 The Kid Who Would Be King ultimately stumbles though due to how repetitive it can be to watch, even if some of the humor occasionally works for both adults and children. Merlin here is portrayed by both a teenager and old man (Angus Imrie and Patrick Stewart respectively); this is done so he can obviously blend in with the children at school while giving them their mission once Alex finds the sword, but also bluntly drives home the message that there is a child inside of all adults and possibly even vice versa. Considering the strong empowering Parkland shooting victims taking impassioned stances on sensitive and heavy subjects in the real world, that’s a wonderful message to preach. But again, there’s nothing wrong with anything the film is saying, just with how it is executed.

More often than not, The Kid Who Would Be King is like watching someone play a video game that only has one enemy type (flaming resurrected soldiers riding around on horses), making for action sequences that often feel similar and repetitive. Naturally, this would be far easier to forgive if the film didn’t reach and possibly cross the two-hour mark. On one hand, I admire the decision to go all out having one more battle with the mega-powerful underworld enchantress played by Rebecca Ferguson (it also should be noted that she does a great job playing up her conniving and manipulative tactics to divide the children) and her massive army of the same enemy type we have seen four times already, including the setting of it all turning the school into a booby-trapped battlefield, but on the other hand it’s hard not to not be clamoring for things to end already when it reaches that point. I also wouldn’t be surprised if most children have the same thought process. At one point, the film even feels like it’s going to end before launching into said extravaganza.

The CGI on display here is also terrible, which makes seeing these children battling the same brand of generic henchmen over and over again more tiring than it needs to be. It’s also no surprise that the story demands these creatures can only come out at night, considering that darkness hides the clarity of poor special effects. All of this is somewhat passable during the early stages of the film where there are only one or two on-screen, but when the environment is populated by them during an all-out war, the situation looks really messy and only makes one want the movie to hurry up and end even quicker. 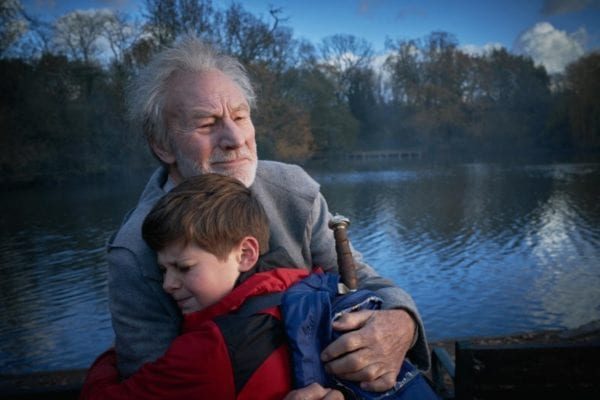 Repetitiveness also applies for the charming aspects of the film; the first time Merlin performs his weird and distinct clicking and clacking motions smashing his hands together to hypnotize adults or duplicate metal, it’s genuinely charismatic and fun to watch. Not so much when it’s happening for the 10th time, and that especially goes for watching him crash into building windows every single time he shapeshifts into an owl. However, the one constant that remains is the charisma of the talented and diverse child actors.  They made me want to like The Kid Who Would Be King, but even though I couldn’t, it’s still fairly easy to recommend to younger viewers based on themes alone.