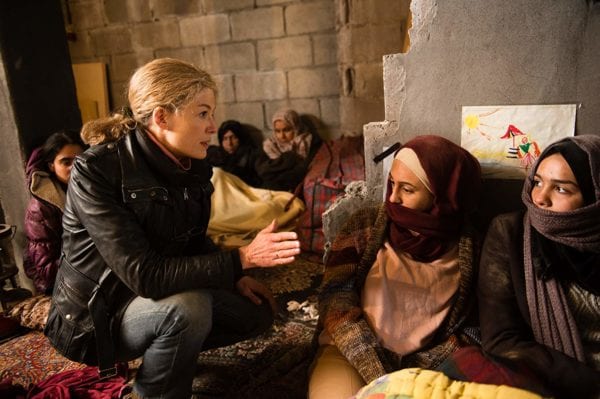 No absolutely. You’re right, it’s a bit of a globalist story, but also very personal because it’s told through the eyes of this brave woman. Reading over her work is astounding- I’m surprised a biopic about her wasn’t produced earlier to be honest because the journalism she did was phenomenal. Learning about the casting of actual refugees is also surprising to hear, and reminds me of the ending of Schindler’s List.

You talked about having to study the history of the many cultures. And I remember reading in an interview you did where you spoke about how, for Alfie, you had to turn England into New York because the former is where the film was shot. For A Private War, the crew obviously could not go to Syria or other dangerous countries, so it was shot primarily in Jordan and England. How challenging was it to create a war zone-like area from like Jordan?

It’s very challenging because, like I said, for all the Syria stuff, Matthew chose a literal construction site, so we had to build from the ground right up to the first floor of all these buildings. We couldn’t rely on visual effects because he wanted trucks passing down through the roads and stuff like that. And because he chose this site that couldn’t have lamp posts, electricity, or roads, we had to create that look out there. I mean I ended up bringing truckloads of rubble to the site. I think if we’d chosen a different part of the place it might have been easier, but we wouldn’t have had the freedom that we had to do all those explosions, which were in-camera and gave that visceral effect of people really running through.

I guess it was easier than doing it in the UK because we’ve got the elements of the architecture, like windows and things like dishes. You’ve got elements of each of the countries cut-in. But at the same time, for instance, with the death of Gaddafi, because that’s such a well-known image, Gaddafi dead on the mattress, we had to copy that exactly. So there was lots of challenges that we faced every day. You know, I had to mimic every detail on that mattress to make it look the same as the real one.

It’s also challenging in that you’re in a country that’s quite young in the film industry, so you don’t have enormous infrastructure for construction and things like that. But like everywhere that I go in the world, I’ve worked in India, Sri Lanka, Brazil, Argentina, I’ve worked all over the world, there’s always a way and there’s always incredible people who, as long as you’re communicative and helping them understand what you want, there’s a way. 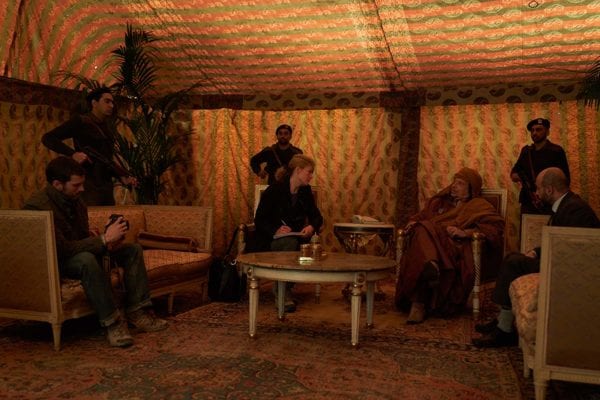 No, you’re absolutely right. It’s one of those things where you’re working closely with others and committing to it. I honestly wouldn’t have even known that this was shot in a different country because of how authentic it looks.

Marie Colvin was of course in these war zones, and the film reflects that through action set pieces involving, as you said, controlled explosions and dirt. As the production designer, are you responsible for making sure the material of those sets and props is safe to use in stunts? Like it won’t cause an unintentional chain reaction or something like that?

Generally, we’ve got a supervising art director and the stunts for health and safety. But as the head of the department, I have to be very conscious that anything I’m asking for isn’t putting anyone at risk. And, at the same time, anything that the director is asking for, from my side, isn’t putting any of my team at risk.

But no, ultimately I’m not marching around there with a hard hat doing a health and safety. There are other people who do that.

It’s not my place for health and safety, but I want to make sure that people are safe. At the same time, I immerse myself. The way I work, I do a lot of research at night- I put myself in the situation, I imagine I’m in those places, I imagine I’m in that country, and how I would function, how I would live- I’m very active with the set decorating side, and especially out in Jordan I was choosing all the props. And then, it’s the details, the pure details, that show the human consequence of war. If I add a single shoe or a child’s broken toy to a pile of rubble, for example, that immediately tells a story. That helps me say anything. That image, if the director wants to capture it, is, in itself, a statement. Do you feel what I mean?

So I’m very obsessed by detail, as well as the bigger picture, because both things truly build up a pattern. And also, to be active, it was very important to Matt and myself that the details were as authentic as possible. When I was employed by Matt, one of the things he said in the interview was “I’m a documentary filmmaker. If I walk onto the set and I don’t feel it’s real, I just won’t shoot it.” And I personally always want to make it as real as possible. I knew that I couldn’t get away with what we call in England botching things, just saying “oh, we’ll get away with that.” It had to feel active, the right light bulbs, all the details had to be there. 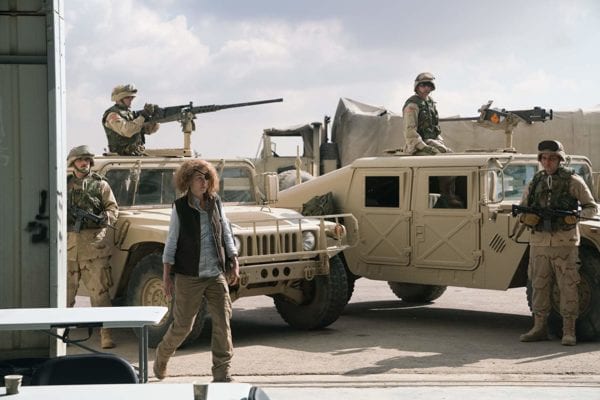 Right, that makes sense that, because you’re the head production designer, you have so many duties already that you wouldn’t be required for the stuff in second unit photography. But I’m glad that you are aware of it, in addition to having that strong eye for detail.

Thank you so much for Ms. Becher for taking the time to speak with me. A Private War looks amazing, and obviously the credit goes to all the departments, but as the production designer you really are the most responsible for the look of it all.

It was such a pleasure!

Flickering Myth would like to thank Ms. Becher for chatting with us. A Private War is out in theaters now.

Special thanks to Britney Thai and Charles Martin of Impact 24 PR for making this interview possible!