While everyone eagerly awaited Captain Marvel and Avengers: Endgame, Sony dropped a bomb last December with Spider-Man: Into the Spider-Verse, a kinetic love letter to comic book nerds everywhere. Fresh off its Academy Award, the film arrives on Blu-ray in a package that includes a big batch of bonus features, a copy of the movie on DVD, and a code for a digital copy. 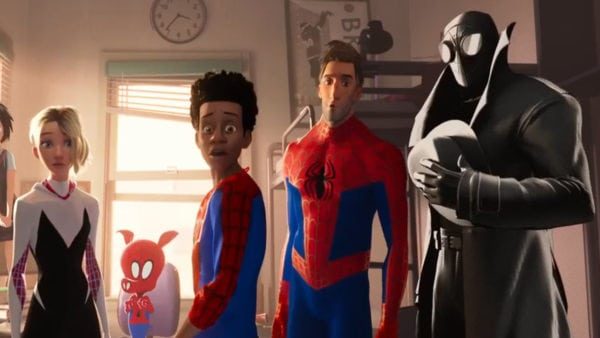 Before the groundbreaking Marvel Cinematic Universe (MCU) came along, the comic book movie that did the best job of capturing the feel of the source material was the original Superman: The Movie. However, whereas that film felt like a four- or six-issue comic book mini-series, the MCU has been over a decade in the making and feels like a multi-year run of various comic book series, complete with crossovers and guest appearances. It’s a stunning achievement that might never be equaled.

So where does Spider-Man: Into the Spider-Verse fall on that continuum? It feels a bit like a 10- or 12-issue maxi-series, or a nice thick graphic novel. Whereas Superman’s major theatrical debut was readily accessible by just about anyone with even passing knowledge of his mythos, this animated movie asks the viewer to bring some prior information with them, or at least be willing to set aside the basic stuff they already know.

While such an approach could have been the kiss of death in the hands of lesser filmmakers, directors Bob Perischetti, Peter Ramsey, and Rodney Rothman handled the script by Rothman and Phil Lord like a skilled juggler tossing a chainsaw and a few flaming bowling pins in the air and putting on a show that leaves the audience breathless.

If you haven’t indulged in this one yet, I recommend that you stop reading right now and do so. Just immerse yourself in the wonder of a movie that happily gives a nod and a wink to what came before, including the 60s cartoon and Sam Raimi’s ill-fated “bad boy Spidey” from Spider-Man 3, while ushering Marvel’s multi-verse onto the big screen. The idea of alternate story worlds is something that only the most hardcore fans were familiar with, so you have to give credit to the powers that be at Sony to greenlight a movie that’s seriously an inside baseball effort, so to speak.

From the get-go, Into the Spider-Verse asks us to toss aside our preconceptions, introducing us to teenager Miles Morales, a streetwise but really smart kid whose dad is a police officer and whose uncle is a ne’er-do-well. When Miles is bitten by a radioactive spider and Spider-Man dies, he finds himself pulled into an adventure featuring an out-of-shape alternate universe Spidey (Peter B. Parker), Spider-Woman, Spider-Ham, Peni Parker, and Spider-Man Noir. If all of that seems confusing, just roll with it – all will be explained.

The script features much of the cavalier humor that’s rampant through Disney’s MCU, especially during the sequence in which Peter B. Parker trains Miles in the ways of being a Spider-Man and shows how he survives with a seat-of-the-pants style that keeps him always flirting with disaster. One way Into the Spider-Verse keeps with tradition is by having Miles navigate his newfound powers while dealing with the tense relationship with his father, who hates Spider-Man, his interest in Gwen Stacy, who has her own secret identity, and his admiration for his uncle Aaron, who also harbors another side to his life.

The visual style is bright and carefree, with the animation seamlessly mixing 3D and 2D images and comic book elements like word balloons and written sound effects peppering scenes. Non-comic-book fans may feel a bit lost sometimes, especially during the multiple “here’s how we got here” montages that are full of references to things that only more serious comic book geeks would know.

And how can you ding a movie for including a character like Spider-Ham? He’s one of the silliest superheroes from Marvel’s many alternate universes, and his inclusion could have derailed the entire movie, but the filmmakers pull it off with the same devil-may-care style that they bring to the rest of the proceedings. It doesn’t hurt that John Mulaney nails the character’s voice and can’t help but make you laugh.

Into the Spider-Verse arrives on Blu-ray in a package that also includes the film on a standard-def DVD and a code for a digital version that has all the bonus features too. (If we’re going to get dragged into an all-digital world, at least give us the extras.) The highlight of the bonus stuff is an alternate universe mode that lets you watch the movie with deleted scenes included, so you can appreciate what might have been. As with other animated movies, the excised sequences are mostly rough motion storyboards, although a few bits got as far as rudimentary animation before being cut. There’s definitely some material that probably should have made it into the final product.

The other bonus stuff includes:

Two music videos and trailers for Spider-Man: Far From Home and the new Men in Black reboot round out the platter.