At the Toronto Comicon this weekend, John Rhys-Davies has revealed to Flickering Myth that he and his Sliders co-star Jerry O’Connell are speaking with NBC about a potential revival of the 90s sci-fi series. 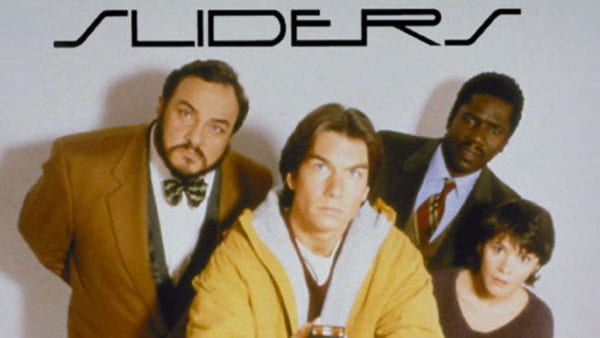 The sci-fi series followed a group of scientists as they discover ways to travel – or slide – into parallel universes. After getting stuck in one parallel universe and losing their way home, they have to discover how to find Earth Prime again or risk being stuck in that world for nearly 30 years before they can open a vortex again.

“Jerry had been pestering me for a number of years and we’re actually talking to NBC at the moment to see if there’s any possibility of rebooting the series,” Davies said. “They’re looking into the basic question of who actually owns it? At the moment we don’t seem to be able to find that out.”

Sliders first premiered on Fox in 1995 where it ran for three seasons before being cancelled. However, it was then picked up by Sci-Fi Channel (now Syfy) for additional two seasons. With NBCUniversal as the distributor though, it might be hard to sort out who actually owns the rights to the series now.

Davies left the show in the middle of the third season after Fox moved production from Vancouver to Los Angeles. Despite leaving Sliders, though, Davies is still enthusiastic to return for more adventures.

“I would do it again, if just to show how it should be done. It could have been the best show on television, it could still be on the air. I think maybe if we got another chance at doing it with the new technology, but also new stories, I think we could do something quite extraordinary. I wouldn’t want to do it for the rest of my life, but I would do it for a season or two if it was right.”

What do you think of a potential Sliders revival? Are you excited for a potential reboot? Let us know in the comments below or tweet us @FlickeringMyth…