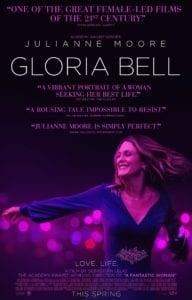 A 58-year-old woman in her prime seeks out love in the nightlife of L.A.

Sebastián Lelio’s sagacious outlook on the odyssey’s of everyday females, from the spirited to the despaired, is prevalent in much of his work. A leader of post-dictatorship Chilean cinema, his films have a sense of individuality that rebel and embrace taboos; A Fantastic Woman and Disobedience, both released over the past two years, tackle LGBT issues with succinct and powerful craft. Capping off this unofficial trilogy is a reimagining of one his earlier films, Gloria; this time changing the language, adding a Bell, a Moore and at one point, a Goonie.

Gloria Bell (Julianne Moore) is a long-time, single divorcee. At 58-years-old, she’s spright and brass, taking to clubs and bars at night, talking to strangers and dancing away like there’s no tomorrow. This seemingly idyllic, unperturbed lifestyle is broken by an unexpected romance in the form of Arnold (John Turturro), another disciple in the church of failed marriages, having been divorced for a year – Gloria responds: “Ah, recently” to which Arnold says “No, finally”.

In some ways they’re similar; they love meeting people on their moonlit escapades, they have an affinity for reciprocated affection (a scene in which Arnold pleads her not to go, followed with a racy shag, confirms this). However, the differences rise to the surface; Gloria constantly reaches for affection with her grown-up children (including a gleefully dry Michael Cera), who aren’t necessarily estranged, they’re just ignorant to themselves (Gloria has to make sure to add “it’s your mother” to the end of every voicemail). Whereas Arnold’s daughters are inexorably dependent on him, calling at all hours of the day over the slightest hiccup, painfully preventing him from having a post-divorce life of his own. 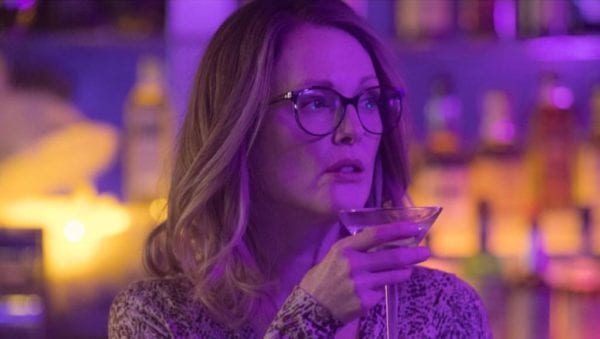 In tackling this quite mundane conflict, Lelio orchestrates conversations with unparalleled resonance and a naturalistic warmth. The storytelling is too slight, particularly in the opening stretch, which despite its delightful nature, lacks a tangible sense of direction for the forthcoming plot. Gloria’s initial courting with Arnold is fringed with cutesy touches, through their first dinner together and even going paint balling. But there’s a real depth to their growing relationship, sparks practically flying off the screen from the intensity of one another’s infatuation. That’s another thing, there’s a handsome amount of coitus in this movie, but the scenes are often deeply sensual, played with some charming levity, through the ripping off of waist trainers and what not.

It’s a case of the craft absolutely strengthening the (already terrific) performances. Alice Johnson Boher and Lelio’s script is astoundingly attuned to the flow of their character’s personalities, evoking laughs from perfectly timed tampon jokes but also finding empowerment from some late-act turns of glorious revenge. Natasha Braier’s cinematography is legitimately perfect, channelling her aptitude for vibrancy (as seen in The Neon Demon) but framing every exterior and interior with spot-on colouring and framing that connects you to the film in an almost spiritual way.

The way that Braier and Lelio first show you Arnold’s peering eyes across the dancefloor has a palpable, buttery sense of charisma. The contrast then at a dinner party with Gloria’s ex-husband, as the camera keeps Arnold’s despairing face looking on at the former couple’s ostracising jollity, is very effective. Turturro’s arc is gratingly repetitive, with quite heart-breaking reason, given more weight by his reliable turn. But it’s Moore who electrifies in an all-time performance that’s a testament to subtlety. The film is practically a single-hander, with supporting figures flowing in and out. It’s the perfect role for Moore to take on though, a character woven with internal conflict but also unadulterated joy, forced to tackle the lamentable and the cheerful through her saga of troubled love and coming to terms with herself as the years pass.

Matthew Herbert’s twinkling composition adds a layer of twilight fantasy to the narrative, brazenly unorthodox but rather dazzling. That, plus the mix of established power ballads as Gloria drives through the city, create a free-spirited mood that embodies the empowering story to a tee – right down to Laura Branigan’s eponymous classic that’ll send you dancing out your seat.

A quietly eccentric crowd-pleaser that shows off an extraordinarily nuanced performance from Moore.