Google is making a huge leap into the gaming industry with the unveiling of Stadia, a new streaming gaming service, at their GDC 2019 keynote.

Stadia does not have a dedicated hardware like the PlayStation, Xbox or Switch. Instead, the games will be accessible over the internet on a variety of platforms including computers, mobile devices, TV’s and browsers – like YouTube or Netflix for video games. Stadia is being described as a platform for everyone and will launch later in 2019 in the US, UK, Europe, and Canada.

During the keynote, Google demonstrated the Stadia on-stage by someone playing a game on a Chromebook, then on a mobile device and then picking up where they left off in real-time on a PC. Additionally, Google showed AAA games such as Doom Eternal and Assassin’s Creed: Odyssey being played on the Stadia. Google is aiming to stream these games at 60 fps, HDR and 4K resolution, with future goals of supporting 8K and frame rates of up to 120 fps.

Although, there is no dedicated console for the platform, there is hardware being released in the form of the Stadia Controller. The controller is a standard gamepad with dual analog sticks, face buttons, and shoulder buttons. The controller connects through Wi-Fi directly to the game, and will include a share button that connects directly to YouTube to upload your gaming clips and a Google Assistant button which will allow the user to access the in-built microphone to connect with Google Assistant. However, the Stadia will support most controllers including the DualShock 4 and Xbox One controller. 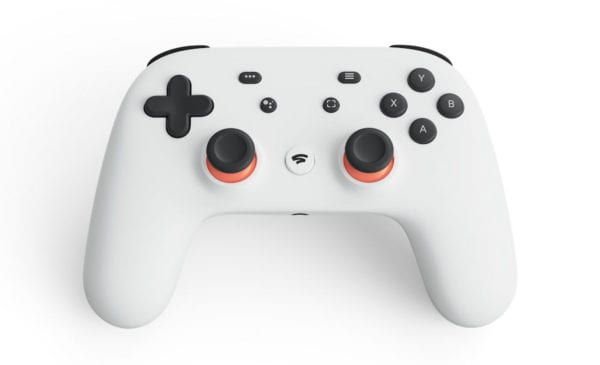 Two of the most intriguing features of the Stadia is the integration of “Crowd Play” and “State Sharing”. Crowd Play gives the user the ability to be watching a streamer on YouTube and with the touch of a button, instantly join that streamer in game. Whereas, State Sharing allows the player to pinpoint any moment within their current game, and create a shareable link of that moment. Players can then grab that link and open the same game at that exact moment and begin playing their game from that point.

Google CEO Sundar Pichai announced at GDC that Google want to build a gaming platform for everyone, and break down barriers to access for high-end games.

As mentioned above, there is no set release date as of yet for the Stadia except for a late 2019 launch. Furthermore, there is no costing details for the service. However, as you don’t need to purchase a console, a Google Chromecast will be one of the options to access the games.

You can watch the entire Google Stadia keynote here…