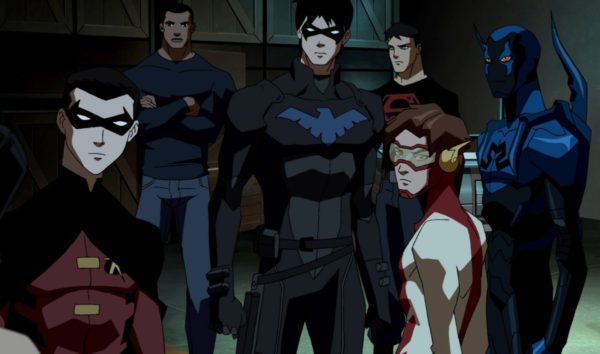 I love learning about behind-the-scenes info, so thank you for sharing that. It’s kind of funny to hear that, for a techno show that was set in the future, you went with an orchestra, but it ended up for the good! You’re right that The Zeta Project had a deliberately different tone, and maybe that’s why it unfortunately didn’t catch on the way Batman Beyond did. I personally believe it stands on its own merits though.

Now, speaking about DC shows, we do have to talk about the series that got us in touch with each other, that being the third season of Young Justice, Young Justice: Outsiders. I’ll ask upfront- what were your reactions when you heard that it was coming back, because it has been quite some time since the second season.

Kristopher- It’s been five years actually, and yes, we were ecstatic when we found out that the show was coming back because we had enjoyed working on the show so much in the first two seasons, and I know that we were terribly disappointed that the story, at the time, didn’t get to go on any further. Greg Weisman and Brandon Vietti are amazing storytellers, and we knew that they had big plans for where to take the story arc, and so when the fans got together and supported the series and showed Warner Bros. that people were still very excited about Young Justice, then Warner Bros. decided to go for it.

I just know that we were all so thrilled because it was a chance, then, for us to join this continuing journey that they’ve told. And this season is just phenomenal, and it’s so exciting and so much fun to get to work on it and return to these characters and follow the storyline; it’s a real thrill.

And have you found there to be a particular difference between composing for the show now that it’s on a streaming service [DC Universe], compared to when you were doing the DC Animated Universe, that was produced by the regular Warner Bros. Animation department?

Lolita- The idea of the streaming service I don’t think affects how we feel about the story. I mean, the contents can sometimes be a little more expansive, and sometimes there are not the same kind of restrictions that broadcast television can have. However, Young Justice is its own animal in a sense. We collaborated very intimately with Brandon and Greg and focused on getting their vision the way that they wanted it with our music. It’s a wonderful thing because occasionally creativity can be squelched by too many opinions from all sorts of different avenues, and, in this case, the creative vision was kind of a tight-knit circle of people who were making those decisions.

And it allowed a truly cool idea to grow and….I don’t know. It’s a rare situation in television. So maybe because it was streaming, maybe that had something to do with it, because of the fact that everything was held back and then released in bursts. I don’t know if Michael or Kris have any other ideas on that, if it was different for us because of streaming. 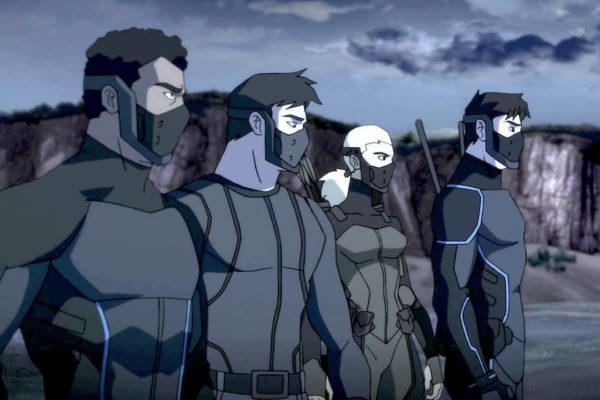 Michael- No, there were some format differences, like no commercial breaks, so it tended to be longer because it’s a streaming service and they don’t have to make the episodes shorter for advertising. The content can be a bit more adult as well because we don’t have the same restrictions that you would if it were being broadcast on broadcast television. People have to subscribe and they have to want to see the content, so they can be more mature than when you tell other stories.

But you know, all of those things are sort of things that are inherent in each project anyway, so I don’t think it was that different. The goal was to make a great show. We had these amazing fans that came back for us and, over the years, have been so enthusiastic about Young Justice, and so we just wanted to come together with Brandon and Greg and make a wonderful return and, if anything, just say thanks to the fans for helping us make that.

For sure, and it really was a surprise when it was announced because when things are cancelled they tend to stay cancelled, but with Young Justice coming back that certainly gives me hope for a potential sixth season of Teen Titans, and I hope that you guys get to do that as well!

I know how busy you all are, so I just had two last questions. One thing I noticed, while reading over DMP’s discography, is that you had a chance to work on the Wacky Races reboot that came out a few years back. I’m curious, the three of you grew up with some of the greatest cartoons ever produced, which I also did thanks to services like Boomerang that used to play reruns of them all the time. Are there any older cartoons from back in the day that you would personally like to see rebooted so you could have a chance to do them?

Kristopher- It seems like so many have come around, haven’t they? Not hand-drawn animation, but they’ve done a new Thunderbirds and Wacky Races. Gosh, I can’t think of anything for me personally. What about you guys?

Lolita- Ah, well for me, I was kind of a Flintstones gal. I used to watch The Flintstones.

Lolita- But I don’t even know if that’s a good idea. We worked on this first season of this reboot of Wacky Races, and it was a lot of fun. It was very different, not necessarily in our regular wheelhouse, but we had a lot of fun with it. I’m actually a big proponent of hearing new voices and looking for new properties. I would love for all the major animation studios to take a chance on some of the lesser known properties and comics and develop them. I think sometimes the reboots, while they’re great, can also leave some interesting ideas untapped that might be somewhere in some vault.

Michael- Well, I got my wish. You know, I loved Superman when I was a kid, he was my favorite, still is. And I was swept away by the Batman movie when it came out. I feel like I’m really lucky because I got all my wishes. I had more fun watching and being involved with cartoons as an adult than I did as a kid. So all my shows that I loved growing up I got to end up working on as an adult, which is kind of unusual and wonderful. 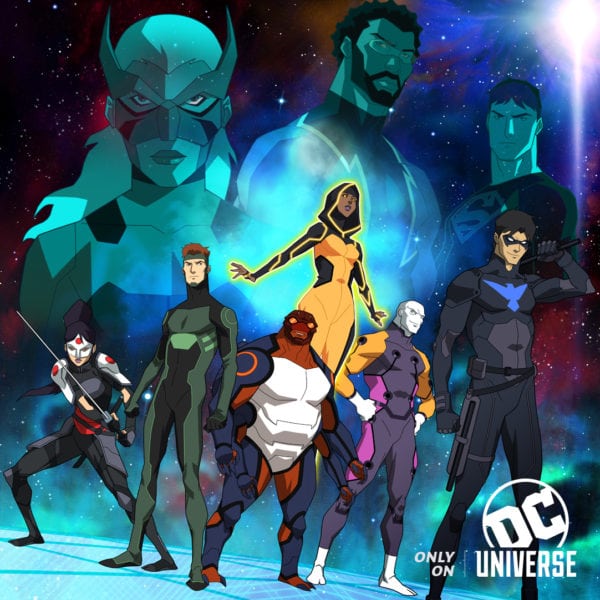 [laughs] That’s definitely great to hear, and I see the point about being less reliant on older properties and being more willing to take chances on new shows. After all, the DCAU wouldn’t have come together if WB hadn’t decided to invest in all these characters.

My last question is something I love to ask every composer I speak to, and that is what are three pieces of music that have had the greatest impact on your music scoring? Now, in your case’s, you can reduce it to one if if you don’t want to spend too much time thinking on it.

Lolita- The greatest impact. Wow…let’s see. Three is not enough, but for me, a very influential piece of music was Ennio Morricone’s The Mission. For two, can I just have one composer and say anything John Williams? If I need to be specific, probably E.T., particularly the way the flying scene made me feel: the way that that made me feel in the movie theater was so powerful that it’s definitely been a huge influence. Come back to me for the third one. Michael?

Lolita- Actually, I know my third. It’s the entire score for Little Women by Thomas Newman.

Michael- Alright, you said formative, so for me, I guess the pieces and composers that had the biggest influence on me were, as a child, I loved Bach. Anything that was Johann Sebastian Bach was just genius and I thought his music was amazing. And then I discovered John Williams and I think anything he does is also amazing and wonderful, and his music was so inspiring to me that it actually turned on some kind of a faucet in me and helped me discover my connection and love for film music.

And then I discovered the Golden Age guys and so I guess Franz Waxman would be my third biggest influence. Once I heard what he was able to back in the 30s and 40s with film music, I just thought “wow, that’s amazing.” So I’ll go with those three, today at this moment, because I could expand that to like 50.

Kristopher- Yeah, actually my formative pieces are all classical, and they happen to all be Russian. I would say my top three most formative pieces are Stravinsky’s The Rite of Spring and two 5th Symphonies: Shostakovich’s Symphony No. 5 and Prokofiev’s 5th Symphony. Those three classical pieces pretty much drove me to want to express myself, and I find myself still drawing upon the way they made me feel creatively even to this day. So those are my three. 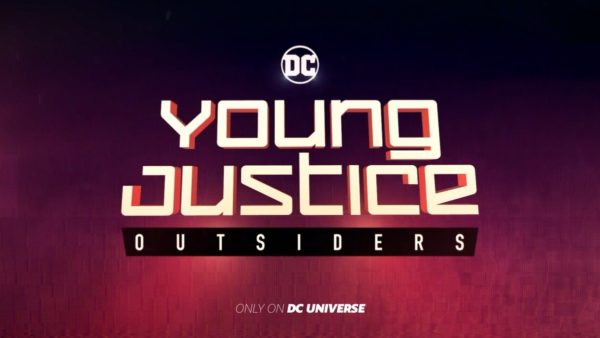 All terrific choices for sure. The most recurring answers I’ve seen to this question are John Williams and The Rite of Spring, so that’s definitely a testament to their craft.

And you folks, all three of you, have been just as influential on, not only myself, but thousands if not hundreds of thousands of fans who grew up on these shows and want to go into the arts themselves. The music truly elicits nostalgia out of me: it’s beautiful, it’s heartbreaking, it’s heartwarming. You all, along with Ms. Walker, mastered the emotions for these superhero shows, and I am forever grateful to you for the work you’ve done. I wish you and DMP the best of luck in the future and thank you so much for this opportunity.

Michael- That’s one of the nicest things I’ve ever heard, thank you so much.

Flickering Myth would like to thank Dynamic Music Partners for sitting down with us. Young Justice: Outsiders is available on DC Universe now.

Special thanks to Adrianna Perez of White Bear PR for making this interview possible!