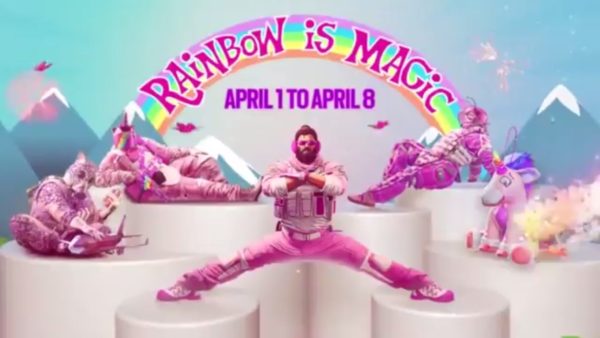 If you ever dreamed of playing a tactical shooter with the aesthetics of a children’s TV show or book, now is your chance. The ‘Rainbow is Magic’ event for Rainbow Six Siege, introduced yesterday, has added a new game mode this week as part of an elaborate April fools’ prank. You have until April 8th to try the mode, a trailer for it can be seen here…

The game mode added by the ‘Rainbow is Magic’ event uses a reworked version of the ‘Plane’ map with the hostage game type; don’t worry though, ‘Plane’ hasn’t been reworked enough to stop spawn peeking and other similar acts of scumbaggery from taking place. On the reworked map, only a select few operators are available including: Tachanka, Recruit, Montagne, Blackbeard, Ash, Thermite, Sledge, Smoke, Castle, Kapkan, Bandit, Frost, and Thatcher.

Several other things have changed for the event too. A storybook voice over narrates your teams’ actions as you attempt to rescue or defend the hostage who has now been replaced by an oversized teddy bear. There are also some unlocks that can be used beyond the end of the event such as outfits for: Blackbeard, Montagne, Tachanka and Smoke. In total there are seventeen new items to acquire. Cosmetics for the ‘Rainbow is Magic’ event can be found in packs that cost a total of 300 R6 credits or from Ubisoft Club Challenges. A trailer showing some of the unlocks can be seen below.

Will you be playing ‘Rainbow is Magic?’ You can tell us in the comments below.