After failing to reignite the franchise with 2015’s soft reboot Terminator Genisys, Paramount Pictures is going back to the Terminator well once more this year with the sixth entry in the series, Terminator: Dark Fate.

With Linda Hamilton and James Cameron back alongside Arnold Schwarzenegger for the first time since Terminator 2: Judgment Day in what is a direct sequel to the 1991 classic (not to mention the inclusion of Deadpool helmer Tim Miller) there’s been optimism that Dark Fate may finally deliver a follow-up worthy of the first two movies.

Well, we got our first look at Dark Fate this week, so is the optimism still there after the release of the first trailer? Or could we be heading for another Rise of the Machines / Salvation / Genisys? Here’s what our writers made of the trailer, and be sure to let us know your own thoughts in the comments, or on our Facebook and Twitter pages… Eammon Jacobs: While the CGI looks unfinished and the action seems generic, seeing Linda Hamilton back as Sarah Connor has piqued my interest without a doubt. Throw in Mackenzie Davis and I’ll go see it for the pair of them alone. I don’t exactly have high hopes since it seems like they’re just retreading old ground. Who knows, James Cameron and Tim Miller might pull it out of the bag, but my expectations aren’t great on this one.

Shaun Munro: Looks like another rancid Terminator sequel. Linda Hamilton’s presence is intriguing but the rest of the film looks like the exact same overblown, ugly CGI slop we all suffered through in Genisys. Keeping expectations low will definitely be smart.

Scott Watson: I had hopes this may have re-ignited the series, but I have to say it looks completely bland and generic. Terminators kinda looked cool but it all feels a bit meh. Tai Freligh: Uhh, what the hell is the plot? Appears to more completely muddle up the timeline of the movies than they already were. How is the original Terminator still alive and an old man? Is that a different version of Sarah Connor in the past? What the bloody hell is going on? More importantly, why? Think I’ll be skipping this one.

Andy Naylor: I’ll go see it, because I love the first 2, but if it turns out to be a 5 out of 10 movie I’ll be pleasantly surprised.

EJ Moreno: Well, just as I thought…a mess. There’s nothing in this for me as a viewer. Action looks generic, plot looks even more basic, and it feels like so many of other films. Cut clips from any Terminator sequel in here, and I wouldn’t be able to tell the difference. Maybe I’m a little happy Linda Hamilton is returning, I love a comeback queen, but that’s about it. Helen Murdoch: CGI needs a lot of work but the inclusion of Sarah Connor does make me slightly interested. Not many hints of the plot which is good but didn’t see anything that gripped me and got me excited to watch it.

Tom Jolliffe: That looks abysmal. We’re in a very competitive era of blockbusters now. That looks way out of fighting shape. There’s no demand for this and the trailer won’t bring new viewers in. Hamilton and Davies offer a little hope but it just looks cheap and no better than the last one. They shouldn’t release a trailer with CGI that bad. They’ll hemorrhage potential viewers. See T-Gen.

Hasitha Fernando: I initially had hopes for this movie with Cameron & Miller’s involvement. My doubts emerged with yesterday’s poster reveal, which credited 05 different writers for story & 03 writers for the script. Having multiple writers on board a project ain’t a bad thing but it usually gives rise to a tonally muddled output. And today’s trailer I’m afraid, cemented my fears. It looks utterly derivative and embodies everything I loathe about all the Terminator movies that came out after Judgement Day. Here’s hoping I’m dead wrong.

Tom Jolliffe: Sometimes I wonder if there’s a case for studios to not bother with trailers. Say for argument sake 4 people in a room of 10 say they’re going to watch Dark Fate. Someone plays the trailer…does the number go up or down? On that trailer, down. This happened with T-Gen. Poor marketing killed it. If your film is good or bad, it makes no difference. If you don’t market it right, people will wait for Netflix. A franchise as war damaged as this needs a hell of a trailer. That’s not good enough. I hope the movie is good but the trailer suggests otherwise.

Ricky Church: It seems I’m in the minority, but I actually liked this trailer and thought it was really good. As a teaser trailer it worked for me in generating excitement and some questions. I think Mackenzie Davis looks pretty cool as the new heroine, but my favourite moment is Linda Hamilton’s entrance as Sarah Connor. I’m cautiously optimistic since Terminator films haven’t had the best track record since T3, but it looks interesting enough. The set pieces look cool, if a little nostalgia driven with T2’s highway chases, but hopefully Dark Fate does enough to differentiate itself without coming across as repetitive and revitalize the franchise. Allen Christian: If we didn’t live in a world where Rise of the Machines, Salvation, and Genisys existed, we’d be having a different conversation about this trailer. I don’t think it looks bad, but it also doesn’t give me any hope that it will be any better than the previous three. This will be the sixth film in a franchise that hasn’t seen a good installment since 1991. Puréed carrots were a staple of my diet the last time a good one of these came out. I don’t care.

Graeme Robertson: I’m sort of mixed on this one. On one hand it’s nice to see Hamilton returning after all these years, I also like how they are putting more emphasis on Davis as the main hero, with Schwarzenegger only having a small appearance, at least judging by this trailer. On the other hand, the CGI is bit wobbly (perhaps not finished yet), the action is really more of the same (cars flipping and explosions galore with the usual robot punch ups) and the whole “terminator that thinks it’s human” feels like a rehash of Terminator Salvation’s plot, but with the time travel put back in. I’ll at least say that I’m slightly curious at this point, but I’m hardly rushing to book my tickets. Harrison Abbott: I want to be excited. I really do, but they keep trying to come up with all these new terminator designs for each successive film. And none of them have a clear defining trait. They’re all just vaguely enhanced iterations of the T-1000. Like what’s this one supposed to be? And how is it any different from that weird John Conner thing from Genysis? I wanted a truly fresh antagonist this time around (like T2 gave us) but instead it’s another rehash.

Andrew Newton: Watching this trailer and having seen every Terminator film since Terminator 2, I kinda wish Judgment Day hadn’t been stopped then we wouldn’t have to have put up with such terrible sequels.

Martin Carr: I am sold on this despite the derivative aspects. Mackenzie Davis looks interesting and committed, Hamilton brings the right kind of baggage with her and grounds this trailer for me. Yes there are set pieces, yes it looks like there are retreads occurring, but having ‘the’ Sarah Connor back on screen is enough. Arnold is nothing more than a figurehead for what the intentions of this film might be. His contributions go no further than that and don’t really need to in my opinion. If this had been made directly after T2 without the hindsight of numerous sequels and lacklustre entries we all might think differently. Terminator: Dark Fate is set for release on October 23rd in the UK and on November 1st in North America. 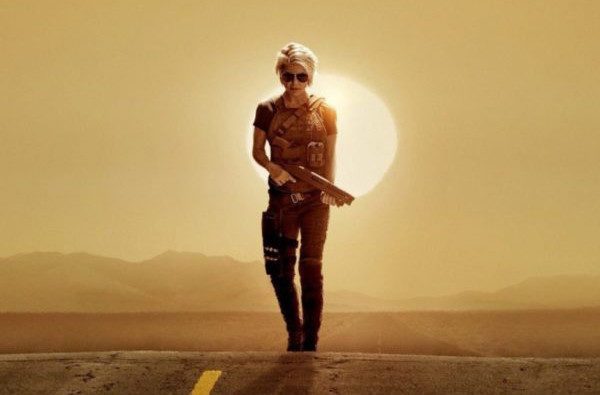