On the eve of their high school graduation, two academic superstars and best friends realize they should have worked less and played more. Determined not to fall short of their peers, the girls try to cram four years of fun into one night. 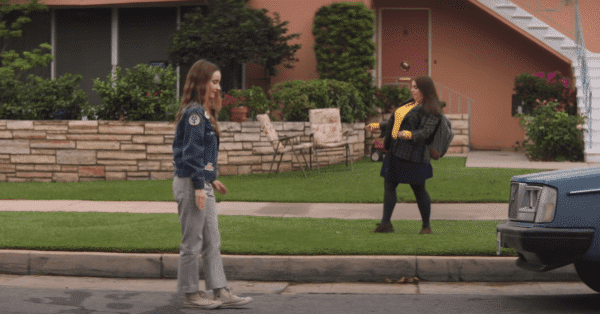 For the first time, watching a gender-swapped style movie (it’s not a direct remake of Superbad, but the structure of the plot is noticeably similar as are some of its themes regarding friendship), it felt like the shoe was on the other foot. Somewhere during laughing my head off, I had the eureka moment of “oh my God, this awkwardness must be like what the opposite sex feels watching high school boys talk about getting laid and fucking pies as sexual training and objectifying women”. Last year’s Eighth Grade captured the isolation of being alone and socially awkward in a deeply humanist way and certainly had its moments of explored sexuality, but Booksmart is the broad comedy version of that experience that dials everything up to 11. To clarify, all of this is a good thing; it almost feels impossible to not adore Booksmart for its refreshing perspectives and spin and the high school comedy. 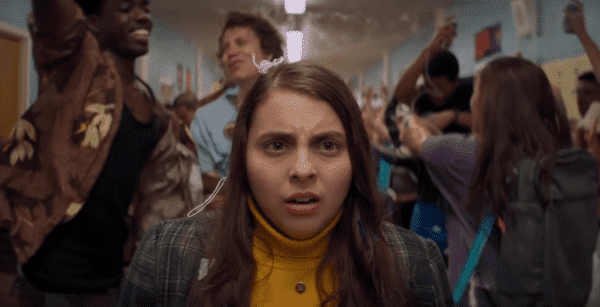 Again, it all starts with the talented production; all of these wild scenarios that occur are clearly rooted in a female mindset. Without such naturalistic dialogue (whether it’s going for humor as in the aforementioned masturbation conversation, or the misconceptions we place on others, such as one girl perceived as an easy type that willingly gives incredible blow jobs to boys in her car or a well-intentioned but dimwitted boy that tries too hard to have affection reciprocated that it’s at the point where there’s a rumor surrounding him of losing his virginity to a sex worker at the age of 14), the jokes and emotion wouldn’t properly land. And Booksmart definitely also reaches some high emotional heights thanks to the fantastic performances and sharp direction from Olivia Wilde (special mention to an underwater sequence that knows how to tell us what a character feels by placing them above water or submerging them during a critical moment).

Kaitlin Dever and Beanie Feldstein are also endlessly charming and magnetic as besties since seemingly forever. Playing Amy and Molly respectively, they are also extremely dorky, the kind of teenagers that never once offset the stress and pressures of being a model student by letting loose and having some fun. Interestingly, Booksmart flips the script on them, as peers that they have perceived to have been blowing off the educational duties have also gotten into some rather prestigious colleges (even the 20-year-old late bloomer will be heading straight to a job at Google). Now, in the interest of fairness, bits of this are a little farfetched, but it’s also a goofball comedy and more importantly, the message being presented is worthwhile and something that teenagers might need to hear. Unfortunately, they probably can’t because the broken MPAA system has awarded this harmless comedy an R rating.

Anyway, this prompts the two to embark on an odyssey throughout the night to find the location of the hottest party in town, and subsequently make their way there to prove that they can also be cool. Honestly, one of the best things about the movie is the series of Lyft driver encounters the pair come across, each driver being a more outrageous personality than the last. I’m pretty sure if the movie was nothing but them driving around all over the place with new people every 15 minutes I would have still loved it, and I think that’s more of a testament to Olivia Wilde’s ability to create fun settings out of anything. The journey takes them to a cruise on international waters, a drug trip (complete with a hilarious stop motion animation segment), and more including an encounter with a pizza delivery guy that lists off pretty much every bad thing that could have happened from two young girls getting into the backseat of a stranger’s delivery vehicle just to strong-arm him for information. There’s nothing like giving our youth life lessons while having everyone howling.

It’s also important to note that Amy and Molly are both being driven by more than simply proving their peers wrong; Molly is hiding a secret crush and most definitely wants to experience the night before graduation party, but Amy’s arc is more personal as a lesbian girl (open for two years but never intimate with anyone yet) hoping to make a move on her crush. Of course, having a teen comedy with one of its leads as a non-straight character also provides another refreshing layer to the proceedings. It never feels forced, and pretty much everything (even if the last 30 minutes takes longer than necessary) during the finale resonates. It could be argued that Booksmart drops comedy entirely for the majority of its final acts to make good on its beautifully expressed emotional throughlines.

We know where most of this is going, but that doesn’t make it any less funny to witness play out. It also helps that Amy and Molly are not the only characters worth caring about, as just about everyone is given some kind of depth and arc. You may not notice that while watching the movie, but once the graduation scene hits there really is a sense that all of these students are unique in their own way and enjoyable to be around. The all-work-and-no-play commentary Olivia Wilde is getting at will also likely play well to adults just as much.

Booksmart is, well, a smart comedy; it’s rich with diversity and representation, new perspectives, up-and-coming actors getting their chance to break through into the mainstream, and toes the line between crude and moving like the best of them. Looking at Olivia Wilde’s acting history, it, unfortunately, feels like Hollywood has failed such a talented performer, so I hope the same system does not fail Kaitlyn Dever and Beanie Feldstein. They are going places, hopefully just like Olivia Wilde’s filmmaking career.