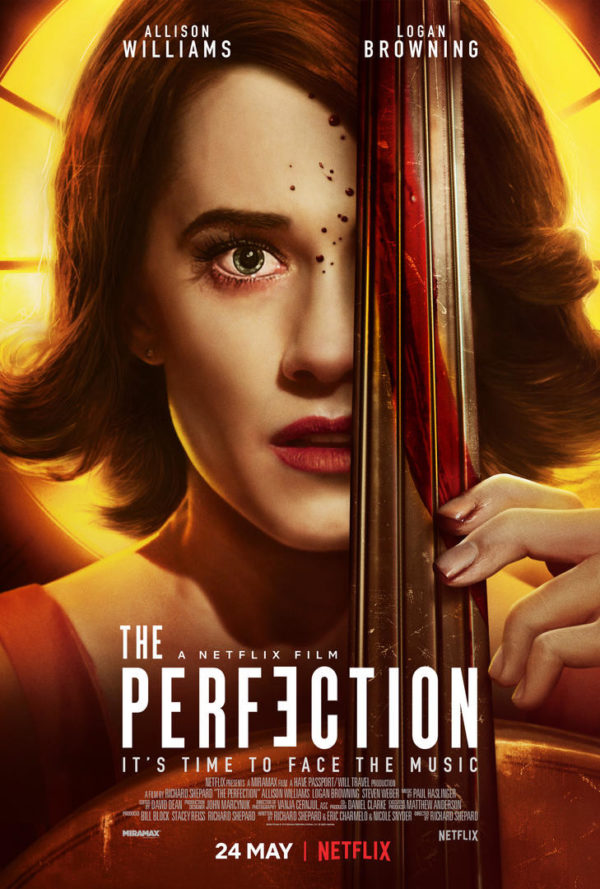 When troubled musical prodigy Charlotte seeks out Elizabeth, the new star pupil of her former school, the encounter sends both musicians down a sinister path with shocking consequences.

Allison Williams stars as Charlotte, a child prodigy cellist who quit the illustrious Bachoff Academy of Music to care for her ailing mother. Years later, after mother’s passing, Charlotte reconnects with Bachoff headmasters Anton (Steven Weber) and Paloma (Alaina Huffman) for a second chance. Fate brings her to Shanghai, where Anton is scouting local talent for a live-in scholarship. Charlotte is flown in as a surprise judge, alongside Bachoff’s prized pupil Lizzie (Logan Browning). The two musicians confess their admiration for one another, strike an immediate bond, mount sexual tension – then, in the blink of an eye, EVERYTHING changes.

Heed this warning: go into The Perfection blind. My avoidance of plot leakings and trailer footage since Fantastic Fest 2018 led to a twisted, helixing watch like a rollercoaster designed to jerk back-and-forth. Spoilers will not infiltrate this review, but even knowing general details may detract from the cavalier preposterousness Shepard wrangles. What starts as smoldering chemistry morphs into savage competition, then blisters into an abusive revenge ploy involving past sins and future castration. Shepard rewinds scenes – you see the rewind and all – to reveal where characters sneak their shifty game-changers. It’s not (sigh) perfect, but achieves a quicksand effect that pulls you deeper into abrasive madness despite your mightiest defensive struggles. 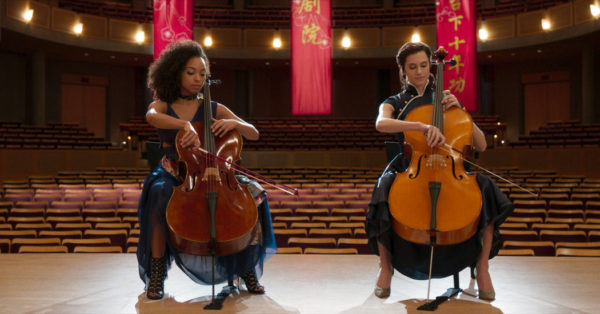 The striking beauty of Vanja Cernjul’s cinematography reflects sophistication and upper-crust style despite images including vomited maggots, chained-and-threatened torture, or gruesome knifeplay. When I previously referred to The Perfection as “sexy,” intent wasn’t just to describe Williams and co-star Logan Browning’s five-alarm hookup. Cernjul’s split diopter focus as Charlotte and Lizzie perform “Duet #3” is divine visual poetry in motion (one cello in foreground focus, the other instrumentalist behind). The way fingers pluck, exchanged flirtatious smirks are captured, or the way red-dressed Charlotte is centered against Bachoff’s sunshine yellow private stage backdrop – this is, blazing in composition, the definition of “artsploitation.”

Lest we not herald Williams and Browning, whose tethered provocation spins out of control faster than Tazmanian Devil on 70s-disco-grade cocaine. Lovers, fighters, insurgents, partners, foes, saviors, warriors – from the moment their eyes meet, you know anarchy awaits. The way Williams compartmentalizes trauma, or Browning wraps her romantic target around her finger: try blocking their tractor beam affection. Passion feeds into hatred, forgiveness into treachery. Their bond strengthens during hallucinogenic freakouts, taser-violence encounters, and magnetic attraction that only ever leans into the depravity of The Perfection. Maybe a bit too heavily for some, but commitment to bit is a huge selling point in this critic’s eyes when said bit demands nuclear-level energies.

Spencer’s narrative is a deep-end dive into creative sacrifices, institutionalized corruption, and systemic societal failures where power begets inhumanity. What we’re willing to do, or endure, to develop talents awarded by sold-out Carnegie Hall shows. The people who swear by our best interests but confuse “lessons” with painful inflictions. Tuxedoes dress monsters in highfalutin camouflage while subjects remain quieted by fame’s temptations. The Perfection may be considered “messy” when compared against contextual standards and too distracted by desires of repugnance to care about narrative steadiness – which, no doubt, is true – but devotion to incendiary satirization isn’t to be downplayed. Quite the opposite. 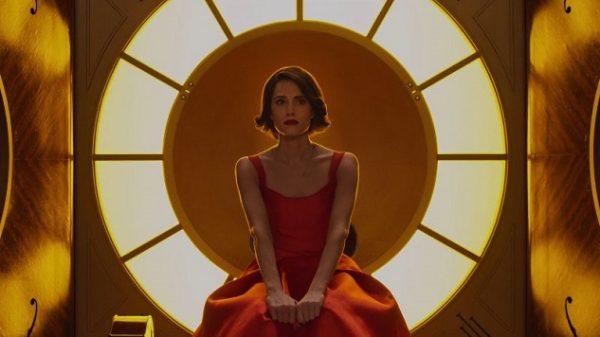 No doubt, Richard Shepard’s after-hours quest to excite, trouble, and destabilize audiences is a bit self-gratifying and inwardly indulgent. The Perfection is cinema’s equivalent to a greasy diner cheeseburger dressed with caviar and edible gold, reveling in late-night cravings while still exuding a taste of 1%-er refinement. Alaina Huffman and Logan Browning elevate this whiplash-warning web of lies, as does Steven Weber honor his arc’s respective duties. Paranoia, punctual punishment, and a proclivity towards not giving a flying “what” create this tonal time bomb that won’t please every viewer, but those impressed will applaud all the right notes as confounding chaos reigns wild and free.