Alec Frazier reports from the Marvel: Universe of Superheroes exhibit… 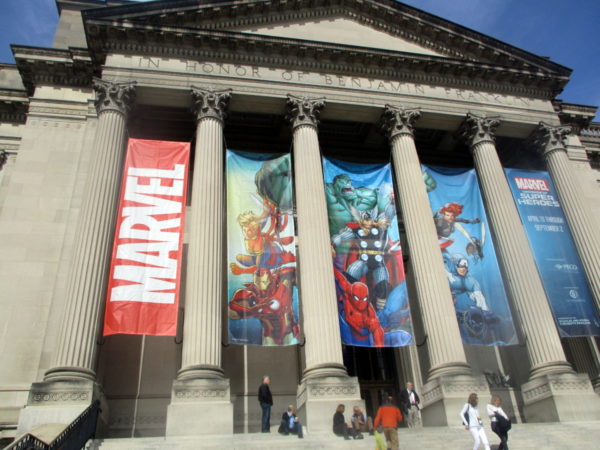 Main Entrance to the Franklin Institute with banners for Marvel: Universe of Superheroes

Approximately a month ago, we were given press access and premiere access to Marvel: Universe of Superheroes, the official Marvel exhibit. Although it first premiered at the Museum of Pop-Culture in Seattle approximately a year and a half ago, it has been heavily upgraded and updated, and is now at the Franklin Institute in Philadelphia. 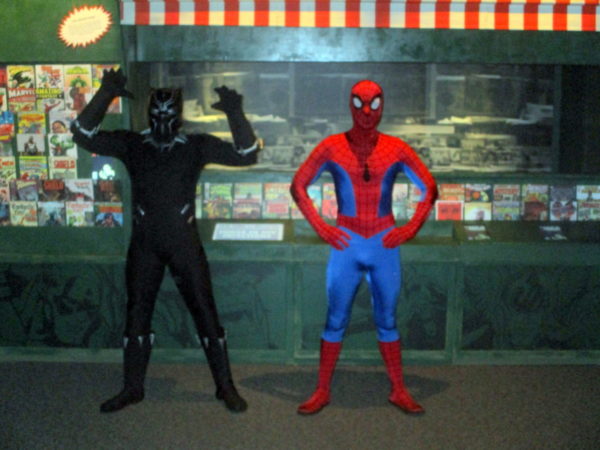 The exhibit is set up into rooms on two different levels. The first, or introductory room is a staging area for entering the exhibit. During our press access, we were greeted by two heroes, Black Panther and Spider-Man! 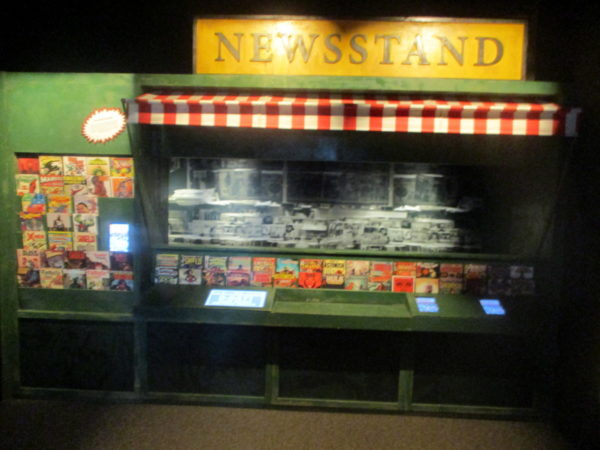 The introductory room has a news stand set up displaying famous Marvel comics issues. It also has a wall with an aerial photo of New York City in 1939, when Marvel comics got its start. There are two prominent quotes, one by Jack Kirby, and one by Stan Lee.

Kirby says: “I don’t know where your father comes from, but where I came from, everybody was an immigrant. We lived on New York’s lower East Side…”

Lee states: “These colorful superheroes…had to live somewhere. Why not…New York? Because that’s where I lived and it was the only place I felt I could write about with a fair degree of accuracy.” 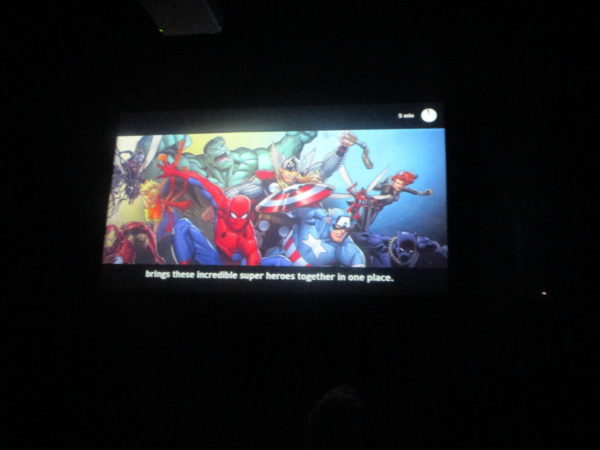 Conclusion of Video in Theater

Reminded of this realism, one heads into a small theater to get an introduction into the wonderful world of Marvel. It is pointed out how Marvin Goodman founded the company as Timely Publications in 1939, and soon brought on his nephew, Stanley Lieber, who soon took on the pen name Stan Lee. It also mentions the realism and humanity of the heroes of Marvel, who are now recognized worldwide. 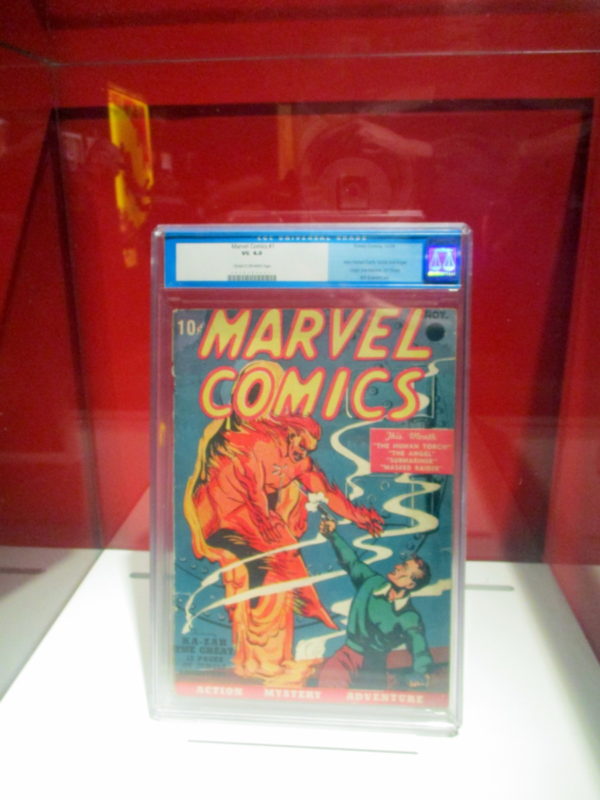 Issue of Marvel Comics Number One in Origin of the Superhero

In the next room, titled Origin of the Superhero, one can find a copy of the first ever issue of Marvel comics, Marvel Comics Number One, which came out in October 1939, and introduced the original Human Torch (different from today’s human torch, but still active in today’s continuity) and Namor the Submariner. The continuity which begin with this issue is the oldest continuously active pop-culture continuity in the world. There are older ones, but they have all been completely rebooted over time. 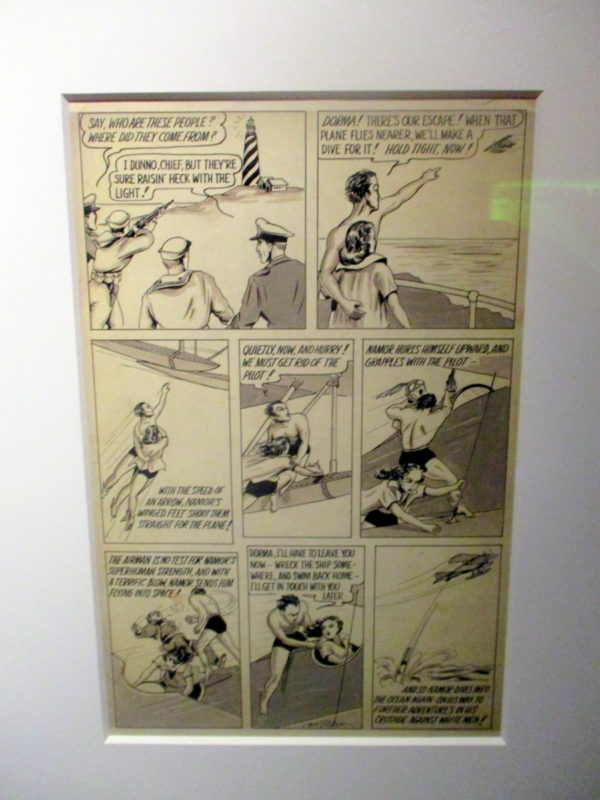 However, if you think that owning a copy of Marvel Comics Number One is the top prize, you would be mistaken. Anyone with $250,000 can potentially buy a copy. The Origin gallery also displays the most valuable Marvel artifact, original art from Marvel Comics Number One. Only one page survives, and it is easy to see why, considering that, at the time it was published, comics were considered just about as reputable as prostitution. In fact, it is an absolute Marvel (ha ha) that it still survives today! Its value is absolutely priceless.

The origin gallery also contains modern displays on the original run of Captain America and the war on comics in the 1950s prompted by Frederick Wertheim’s book, Seduction of the Innocent. 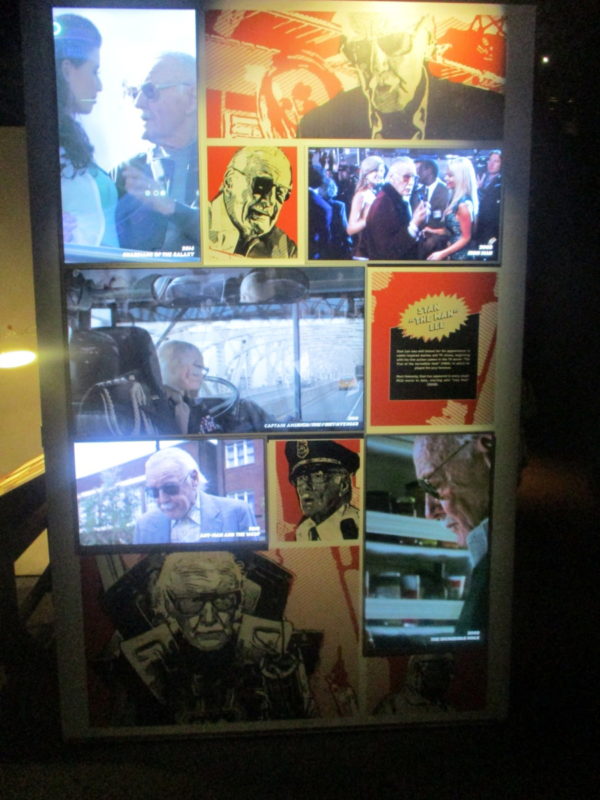 Video display of Stan Lee cameos in Studio One: The Origin of Marvel Comics

There are three “Studios” in Marvel: Universe of Superheroes. These spaces have interactive displays on making comics and how they work. The first one is The Origin of Marvel Comics. It contains mostly modern displays on Stan Lee, Jack Kirby, and the early Marvel offices and staff. It also contains a special tribute to Stan Lee consisting of a video display of his many cameos. 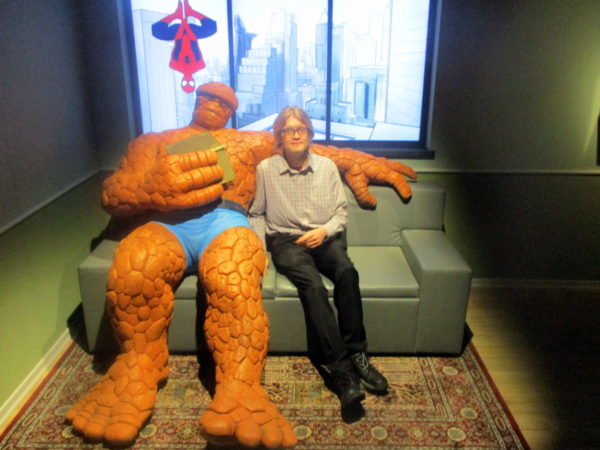 Across from the Stan Lee display, one will find the Thing asleep on a couch in front of a window looking out onto the superheroics of New York City. The window is actually a video screen choreographed by Marvel’s historian and curator, Ben Saunders, whom gave the press our guided tour. 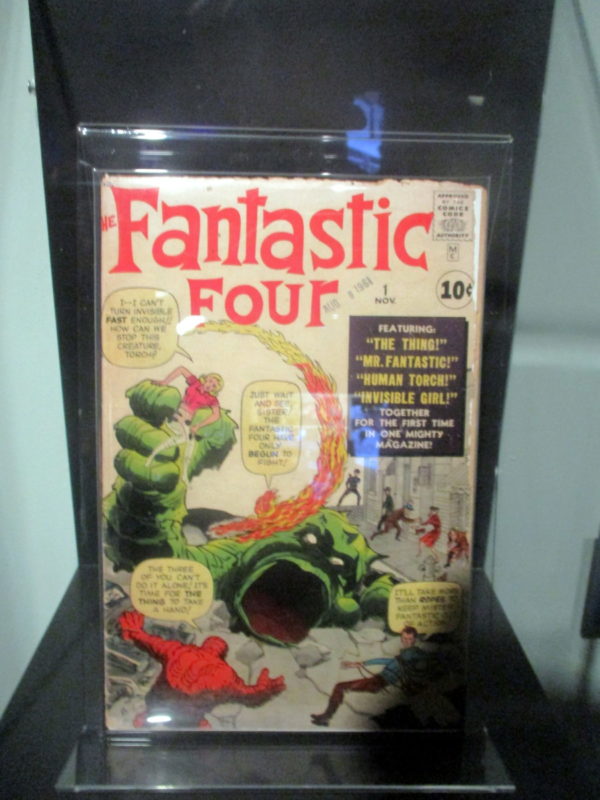 The Thing is, of course, part of the Fantastic Four room, which includes a copy of the first issue of the Fantastic Four series of comics. The Fantastic Four was introduced as Marvel’s response to the heroes and teams of rival DC comics. You will note that, on the cover, the various team members are wearing everyday clothing and not superhero uniforms. This was deliberately done to indicate that they were humans just like the rest of us, and more importantly, that they were a family, with all the love, woes, and dynamics of every American family. 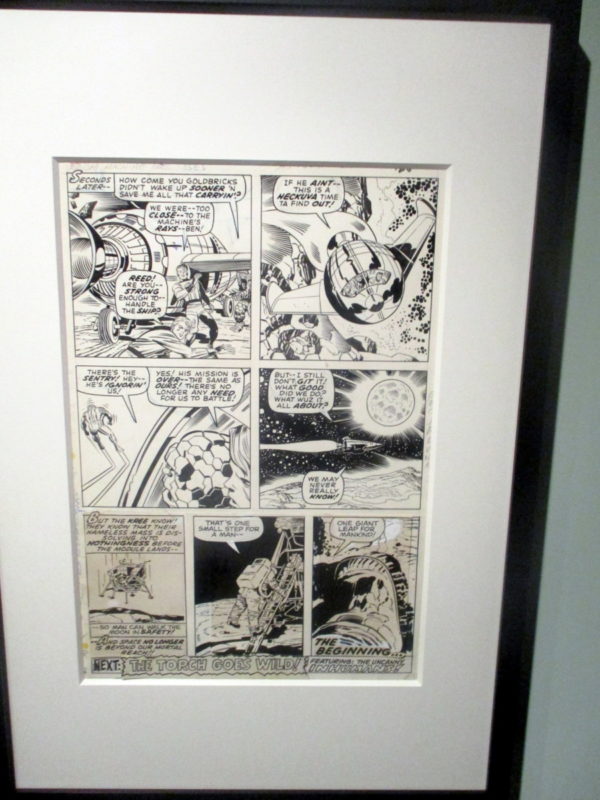 Of course, the Fantastic Four got their powers by going into space, so Marvel naturally published a special issue as tribute when NASA finally landed a man on the moon. 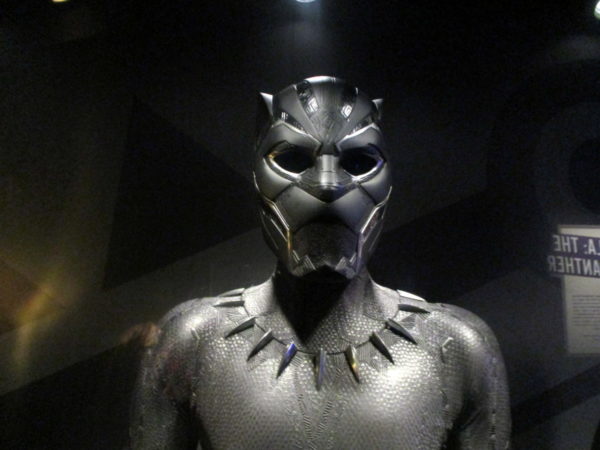 The next space is the Black Panther room, which focuses on Marvel’s pioneering African superhero of the same name. There is a detailed display of the costumes from the motion picture dedicated to this hero, including three of the costumes themselves. 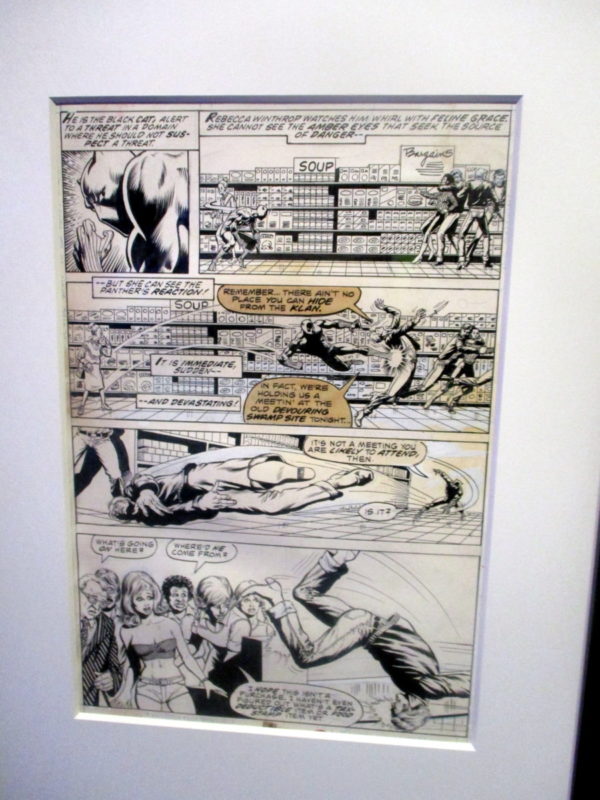 Original Art by Billy Graham in the Black Panther Room

Marvel has always favored diversity, and it hired some of the first African-American talent. One of them was an artist named Billy Graham, and some of his original art is on display. There are also features on this setting of Black Panther, and its civil rights importance. 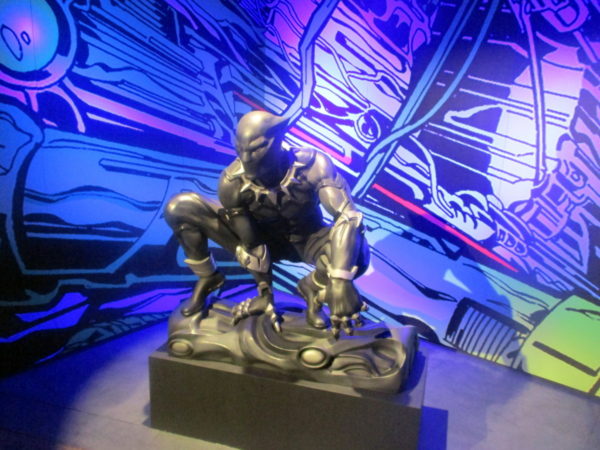 Marvel has always been and remains dedicated to civil rights of every population. Black Panther was launched during the civil rights movement of the 1960s, and got a lot of hate mail. Half the country was coming out of segregation. Many people angrily wrote letters demanding that Black Panther stop being so powerful and prideful. In response, the next issue featured the Black Panther beating up the KKK. That put the racists in their place! 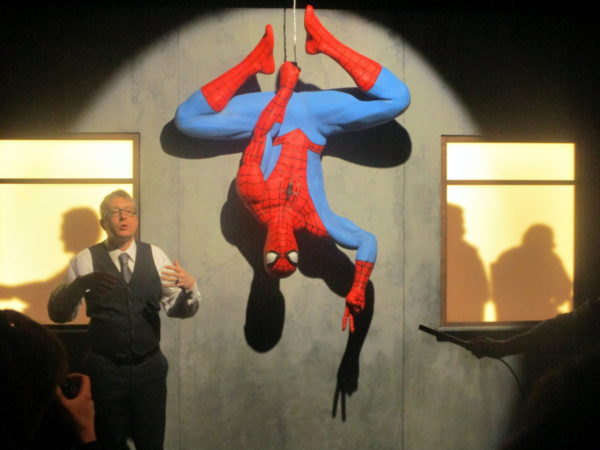 The next room is the Spider-Man room. Spider-Man is possibly the most popular superhero in the world, and needs no introduction. 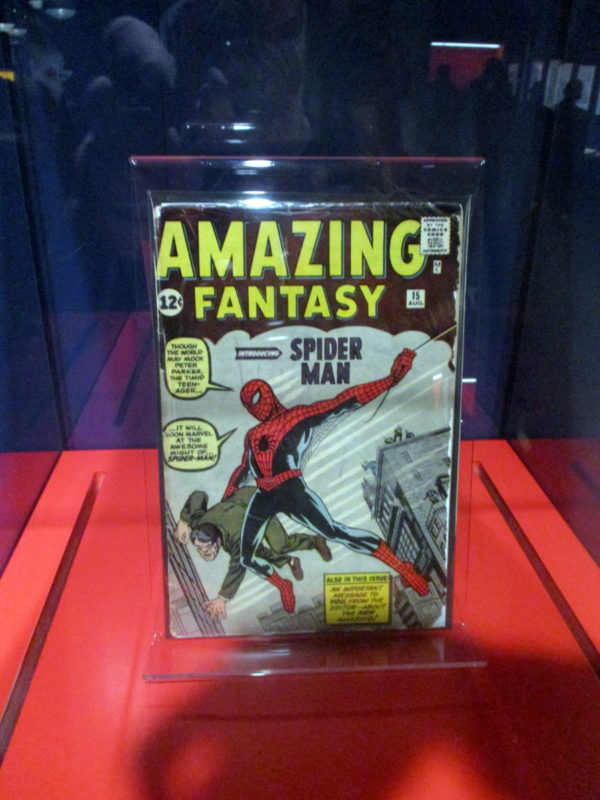 The exhibit includes a copy of Amazing Fantasy Number 15, featuring the first appearance of Spider-Man. 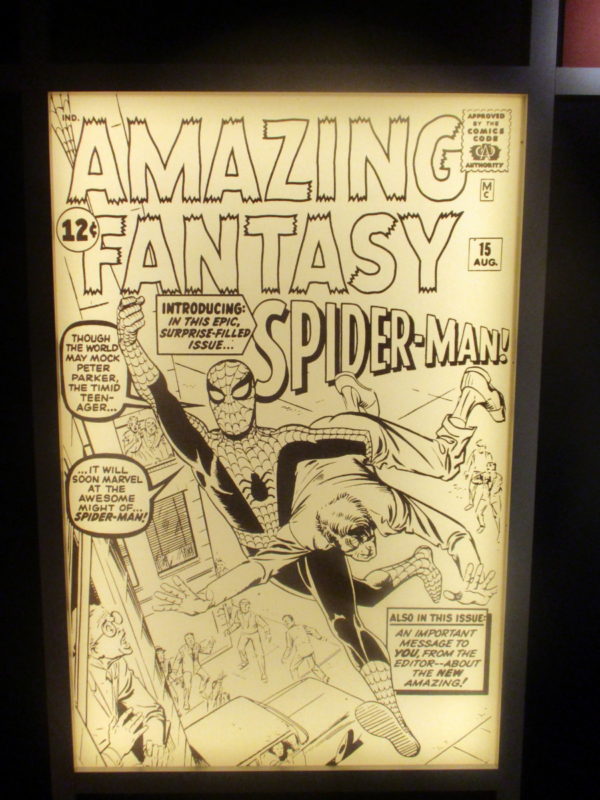 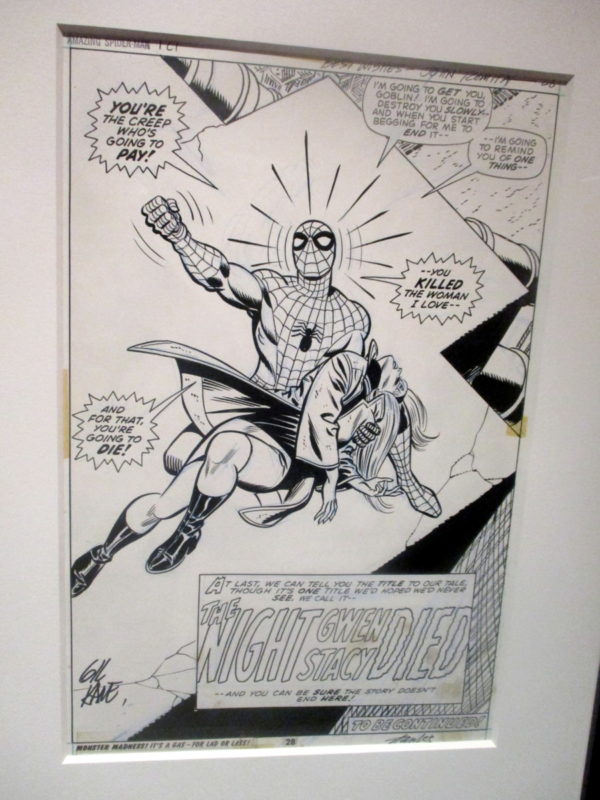 Peter Parker, a.k.a. Spider-Man, was always supposed to represent the audience of Marvel Comics, so he was made a geeky school kid, a misfit, someone going through the pains of life. Arguably his biggest pain was the death of his true love, Gwen Stacy. In fact, some of the surviving talent responsible for that issue still get death threats for killing her off. Clearly, Marvel knows how to move audiences. 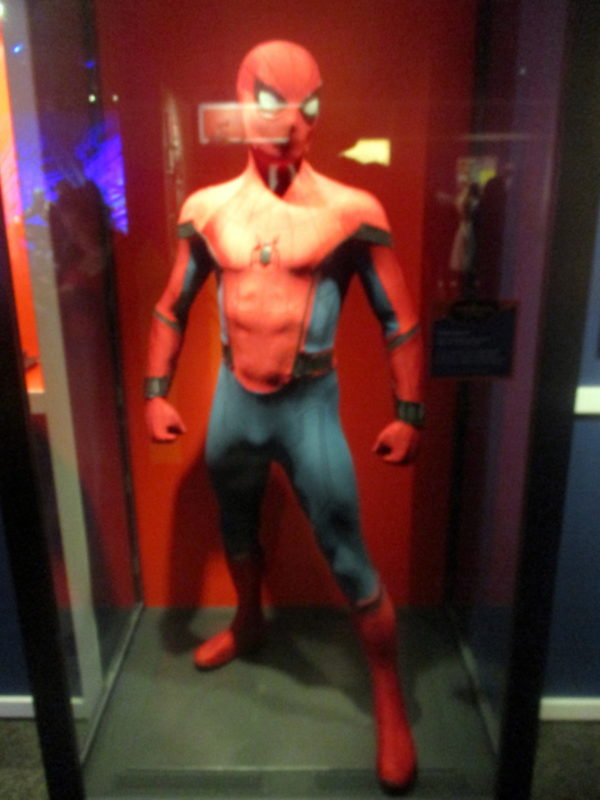 Of course, Spider-Man has been very successful in motion pictures, and the exhibit has memorabilia two of the three franchises. They have the mask and a pumpkin bomb of the Green Goblin from the original Spiderman film of the first franchise, as well as the mask of the Vulture from the third, current franchise. From that franchise, they also have Tom Holland’s Spider-Man uniform 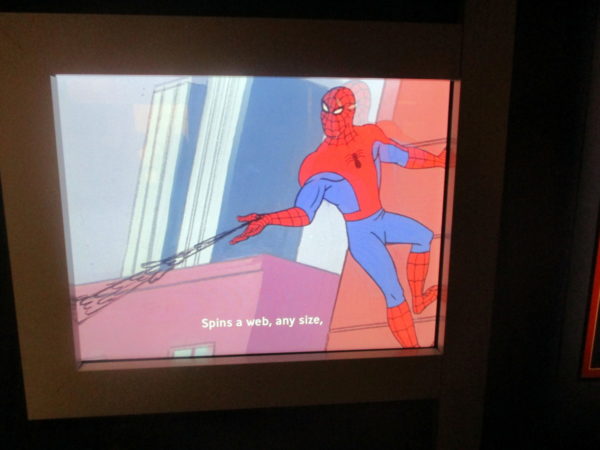 Spider-Man has also been amazingly popular with little kids, and there is a special display of the theme song from the 1960s series that has recently become so popular in memes. 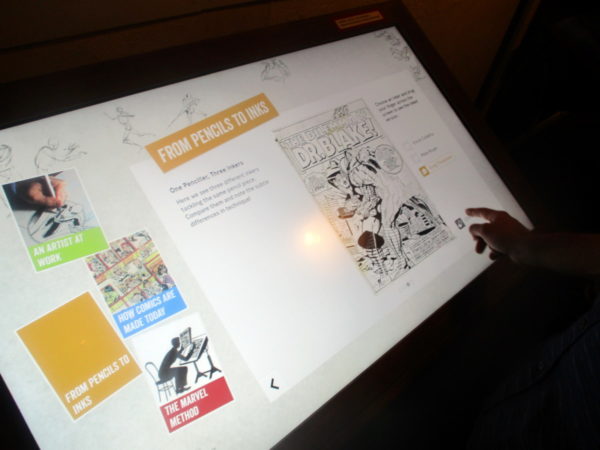 Digital Display in Studio Two: How Comics Are Made

One then comes to the second studio, on How Comics Are Made. Almost all comic book companies give sole plotting power to the writer. Marvel, however, recognizes the importance of good artists, and uses a different method, appropriately called the Marvel Method. The upshot of the Marvel Method is that the writer lays out an outline of where the issue should go, and the artist decides how it gets there by drawing the story as he or she sees fit. Thus, making a comic at Marvel is truly a collaborative effort! 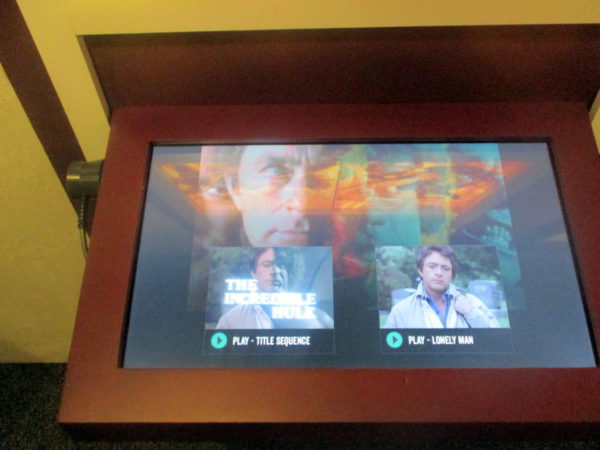 Display on The Incredible Hulk Television Show in the Hulk Room

The next room is dedicated to the Incredible Hulk, who has traditionally been Marvel’s strongest character. Marvel live-action media is actually not a new thing, and The Incredible Hulk television show is evidence of that, having come out in the 1970s and 80s. There is a display on that show in the Hulk Room. 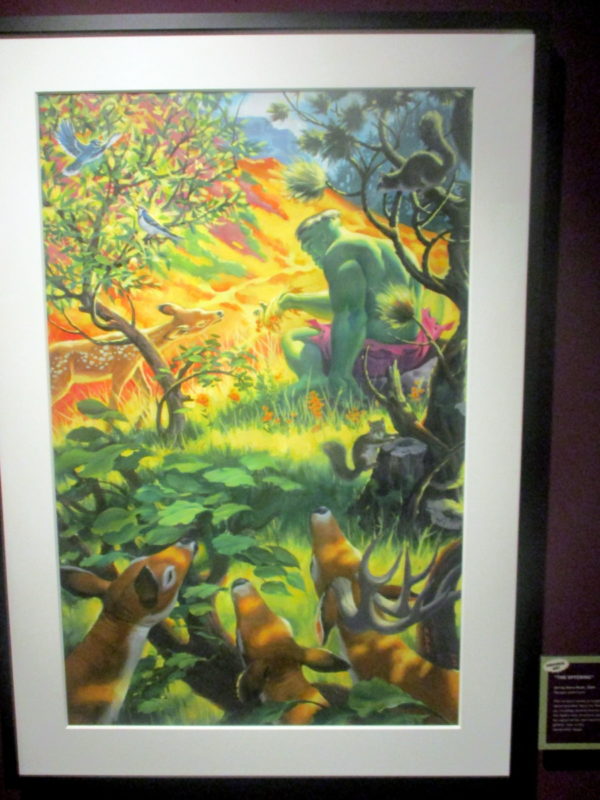 Painting of the Hulk Feeding a Deer in the Hulk Room

As mentioned before, Marvel Comics and Entertainment have always been champions of the misunderstood. They went to the extreme with that formula with the mild-mannered geek named Bruce Banner who cannot control his transformation into the devastating and powerful Hulk. There is a scene when the Hulk is having a rare moment of peace, feeding a deer, when hunters stumble upon him and unleash his horrible rage. The curators of Marvel: Universe of Superheroes wanted to show the moment right before the hunters unleash the terror, and commissioned an extremely beautiful painting of the Hulk feeding the deer. 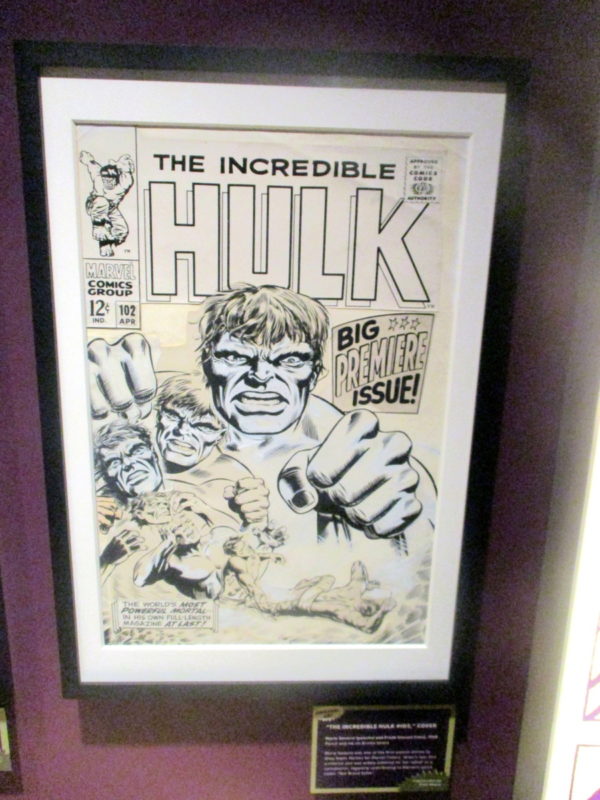 Original Art by Marie Severin in the Hulk Room

Just like African-Americans, Marvel Comics was hiring women decades before the competition. In the early days, Marvel’s premier female talent was artist Marie Severin, who did work on issues of the Hulk.

We hope you enjoyed this photo essay! Join us next time as we profile the section of the exhibit on the Mighty Avengers!