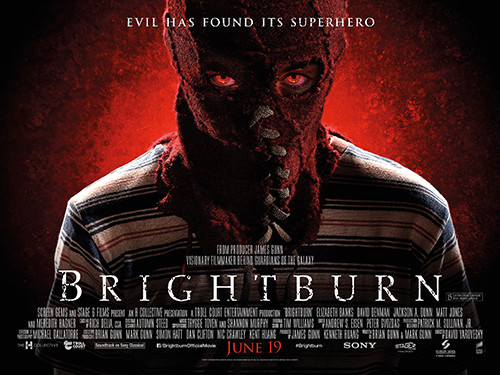 What if a child from another world crash-landed on Earth, but instead of becoming a hero to mankind, he proved to be something far more sinister? As much as folk might want to wring their hands about the prospect of “superhero fatigue” in our comic book-saturated cinematic landscape, the genre is in a greater state of flux than ever before. Avengers: Endgame showed the truly mind-melting rabbit-hole talented filmmakers can take audiences down, its success proving the storytelling viability of parallel universes and tangential “what if?” stories.

Brightburn, produced by James Gunn and written by his brothers Brian and Mark, couldn’t be much further from Endgame tonally or budget-wise, but it does present its own compelling test to the typical superhero formula, by taking a name property and giving it a not-so-subtle, sans-branding reinvention.

Anyone who’s ever seen a Superman movie should be well aware from Brightburn‘s marketing that the movie effectively attempts to answer the tantalising question – “What if Superman was a murderous sociopath?”

All the origin story staples are there, namely the crashed ship containing an alien humanoid baby and the kindly couple, the Breyers (Elizabeth Banks and David Denman), who take him in as their own, while flatly unaware of all he has to offer.

But as puberty kicks in, so too do Brandon’s (Jackson A. Dunn) Man of Steel-esque superpowers, while he finds himself drawn to a mysterious force which urges him to obliterate anyone who dares cross him. Naturally, as the injuries and eventually the bodies start stacking up, the Breyers must consider quite what will become of their baby boy sent from the stars. It’s one hell of a set-up and certainly the most original premise for a superhero film in quite some time. But it’s also fair to say that Brightburn isn’t really a superhero film; the comic book-y elements are better described as a gloss around which a more conventional slasher film formula is wrapped. Indeed, the overwhelming majority of Brightburn is focused instead on Brandon’s speedy descent into murderous evil, suffused with occasional (and, admittedly, disappointing) jump scares, alongside brutally violent death scenes.

It is without question a movie that doesn’t nearly do full justice to its set-up; clocking in at a frantic 90 minutes, Brightburn ultimately feels too expedient for its own good, hastily racing through the set-up when Brandon clearly would’ve benefited from an extra 20 or 30 minutes of development to really sell his “turn.” But the script from the brothers Gunn keeps things incredibly ambiguous throughout, when lending greater clarity to Brandon’s emotions would’ve helped the film immensely.

It’s vaguely implied that Brandon has an internal good/evil struggle going on, yet this isn’t really palpably felt throughout. Ultimately, having a nearby force compelling him to murder isn’t nearly as interesting as a confused young alien boy struggling to deal with burgeoning puberty, complex feelings and wielding an unprecedented level of power.

Even so, Brightburn is often kept firmly aloft by its performances. Elizabeth Banks and the oft-underutilised David Denman are terrifically convincing as Brandon’s parents; Banks sells the denial we’ve all seen in so many mothers, while Denman takes a far more pragmatic approach to dealing with his adopted son. Jackson A. Dunn, who amusingly also cameoed in Avengers: Endgame as a young Scott Lang, holds his solid own against them as Brandon, selling the emotional turmoil of the character even when the script doesn’t give him too much to work with. The rather tepid quality of its early suspense sequences is thankfully inverted by the mid-way point, where director David Yarovesky begins to steadily dole out the brutal gore, as is sure to satisfy fans of the horror genre (and repulse many hoping for a slightly less-nauseating superhero movie). The grisly effects are really quite splendid throughout, and underpin the film’s unexpectedly harsh, unsentimental tether to its subject matter. Yarovesky holds this line of integrity all the way to the film’s bonkers finale, too.

Above all else, it’s easy to want to support a film like this; it’s trying something new in two genres typically kept separate, and with a price tag between just $6-12 million, it looks a good deal more handsome than you’d surely expect.

It definitely isn’t without its scripted frustrations, though; the film’s fast-and-loose narrative has come at the expense of some easily filled-in character potential, which surely would’ve tied the whole excursion together more neatly. Nevertheless, it does enough to intrigue, to repulse and to further bat away the (ironically tired) superhero fatigue argument.

If breezy to a fault and failing to fully embrace its mighty promise, Brightburn‘s uncommonly nasty approach to caped shenanigans will surely win it a legion of enthusiastic fans.