Currently underway is Rogue Wave, a brand new event for World of Warships on PC that takes commanders to a post apocalyptic world with new modified destroyers, an array of post-apocalyptic camouflages, a new four team game mode and a ever decreasing wall of fire that will force nerve shattering close quarters fighting.  See more in the trailer below….. 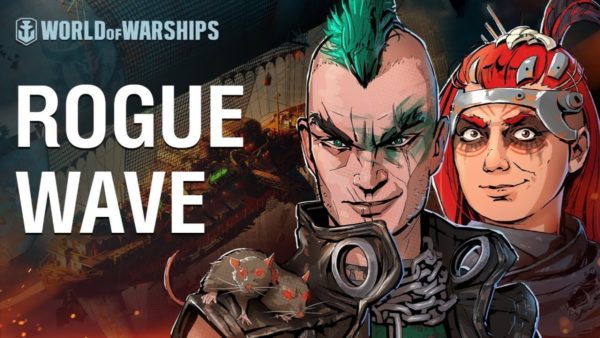 Rogue Wave takes players to a post-apocalypse world filled with the ruins of a once prosperous civilisation and that is now the playground for fleets of scavengers to fight it out.  To capture the atmosphere, a brand new themed port featuring abandoned skyscrapers, motionless trains and ruined factories draws players in to this devastated world.

Players who have unlocked access to combat missions and challenges in their Service Record be able to participate in a new “Savage Battle” mode that will see 4 teams of 3 ships engage in a free for all battle.  Matches will start on the outskirts of a ruined city and players will need to destroy all members of the opposing teams, but be careful as 1 minute into the game the safe zone will begin to shrink due to a wild fire and anyone caught outside the safe zone will gradually lose HP.

In this event, players will be able to unlock 9 unique post-apocalyptic destroyers.  These have been divided into 3 classes and each of these will come with a 19 skill point Commander.  Each of these destroyers in each class is more powerful than the previous one in terms of specifications but each will require more credits to service.