Indie developer Rikodu has announced the release of their fun packed robot action game Second Hand: Frankie’s Revenge on Steam Early Access.  This robot fighting game will see players go solo or join up with friends in local or online multiplayer and build robots out of junk to take on hordes of alien robots. 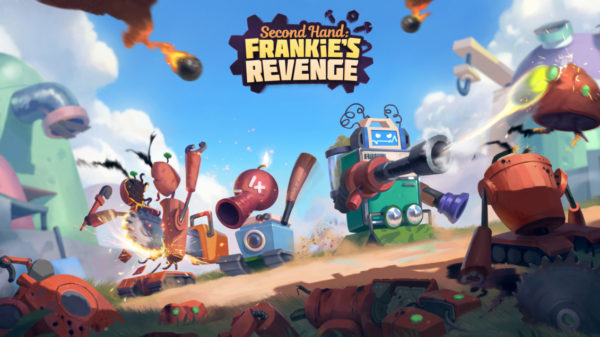 In Second Hand: Frankie’s Revenge players take the role of the titular Frankie, a sentient machine that lives in a scrapyard filled with junk.  When aliens invade it is up to Frankie to protect his junkyard.

Players will be able to build their own Frankie robot by selecting each parts such as body, head, legs, main weapon and offhand weapons to suit their playstyle.  Using these different parts players can change Frankie’s health, energy, speed and weight to fulfill different squad roles like Tank and Support.

“Everyone here at Rikodu has worked hard to make Frankie’s Revenge as polished and fun as possible for today’s public launch. Players can finally live out their dream of being a killer fridge with a chainsaw arm and a disco ball for a head!  With such a solid foundation, we’re focused on expanding the game with new features and content while in Early Access, as well as working with the community to improve the game even further.”  said Rikodu’s Managing Director and Co-Founder Alexandru Palade.