Long before 4DX had cinema goers vibrating in their seats, faces sprayed with water and something tickling the back of the ankles, the children of the 80s and 90s made their own cinema experiences that little bit more immersive all on their own. Or perhaps it was just this small, odd, habitual collection of people.

Either way, it’s a ritual that has been an integral part of film viewings for some ever since. The practice of putting yourself in the character’s position, seeing if you could survive the same odds or if you’d be one of those who would sink to the bottom.

The ritual itself? Holding your breath throughout any and all underwater scenes. Sure, some are akin to holding your breath in a heaving elevator during rush hour in the middle of a heat wave. Easy. But others take an almost-Atlantean amount of effort from the average film fan.

Which are the films in question? Come dive in. Although Ripley’s fourth outing gets more grief than Fincher’s Alien3, the consensus is that Alien: Resurrection’s underwater escape scene is one of the franchise’s finest.

As the crew attempt to navigate the infested USM Auriga without encountering any Xenomorph-shaped complications, the rag-tag bunch are forced to swim through the now fully submerged kitchen. The cooling tanks have inexplicably flooded the space, leaving the gang with 90 feet of water between them and the freedom of the freight elevator. Good job the aliens can’t swim. Can they?

The scene itself took a toe-wrinkling three weeks to film, with the previous week spent filling the set with water. A crew of additional divers were also brought in: one for each actor in the scene, armed with a spare source of oxygen.

All of this was pretty handy, especially when Ron Perlman knocked himself out by hitting his head on a ceiling sprinkler. When Winona Ryder suffered a complete anxiety attack on the first day of filming, it marked the first time she had gone underwater since nearly drowning at the age of 12.

The journey of the scene itself is arduous enough even before the Star Beasts turn up. Some of the crew crawl along the grated floor, weighed down with weaponry, whilst others drag themselves along the furniture. Sigourney Weaver’s Ripley? She glides through the water, making Aquaman look like he struggles doing the doggie paddle.

It’s the co-pilot, Hillard (Kim Flowers) who comes a cropper though. Already reluctant to take the plunge, she brings up the rear and soon finds she’s being closed in on by the newly cloned Xenomorphs. Panic sets in and she’s dragged back through a blur of bubbles, before drifting out of focus. 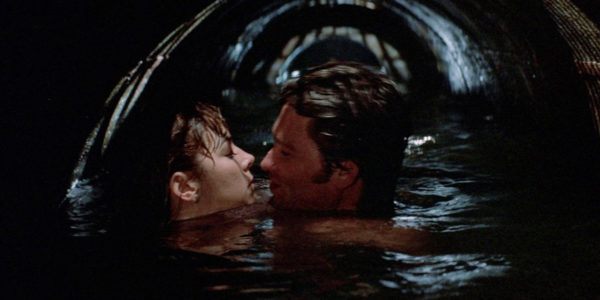 There are two underwater scenes in Big Trouble in Little China, either of which can help you to feel like good ol’ Jack Burton or, you know, someone who’s actually heroic.

The first sees Jack (Kurt Russell) and Wang (Dennis Dun) caught in a flooding elevator whilst en route to rescue the green-eyed Gracie Law and Miao Yin from the Wing Kong crime gang. Choosing to spend their last oxygenised moments bantering and apportioning blame, our heroes escape by prising open the lift doors before having a comfortable Sunday morning swim through chained up, crab-eaten corpses. The tight denim can’t have helped though.

The second scene comes shortly after and provides something more of a challenge. When the gang free a host of imprisoned women, they escape gunfire via some sort of pool/service tunnel combo. Law (Kim Cattrall) is the first to surface at the safe end and one-by-one searches the survivors to see if Burton’s survived the dive.

This time, the underwater action takes place offscreen and stretches the lungs even further, as the 80’s bouffants and mullets appear from the water. With the relief felt when Jack finally manages to take his first breath, it’s no wonder he spends his second breath planting a smacker of a kiss on Gracie Law’s lips.

It’s fair to say that Han, Luke and Chewie make a right hash out of rescuing Princess Leia from the Death Star’s detention block. Pinned down in a corridor, the rebels dive through a drain and into a rubbish dump, which soon turns out to be a trash compactor.

As well as the wonderful smell they discover, just when things can’t get any worse, it gets worse. Young Skywalker (Mark Hamill) is pulled under the knee-high, bin bag water by a tentacled Dianoga, disappearing from sight as the others look on helplessly.

The four actors spent the best part of two days partially submerged for the shoot, which saw Hamill having to be blow-dried back to normal after each underwater take with frustrations running high. It was also reported that Peter Mayhew’s Chewbacca costume never lost that wet dog smell.

Luke gets dragged under for a measly 12 seconds (although, to be fair, he’s also being strangled) before getting a slight reprieve to dispense some indistinguishable dialogue and going back under for double that. He’s soon released anticlimactically, but finds himself in another squeeze. 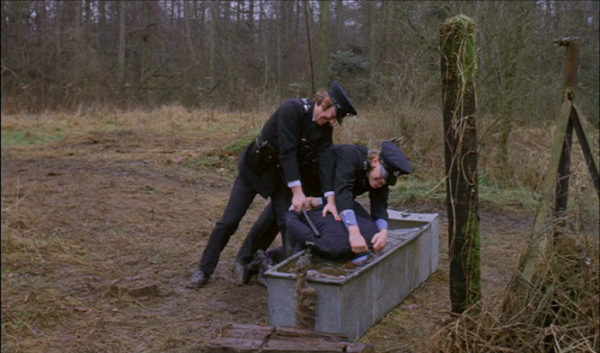 “You’re not exactly known as one-take Kubrick, are you.” This was reportedly the response of the soon-to-be-Darth Vader, David Prowse, when preparing to shoot the scene where he carried Patrick Magee and his wheelchair down a flight of stairs. Low and behold…. 6 takes later and Kubrick had it in the can.

For that reason, the scene where Malcolm McDowell’s Alex DeLarge gets held underwater by his former Droogies is all the more uncomfortable viewing. Seemingly shot in one continuous scene due to the duration of McDowell’s submergence and the stillness of the shot, there is a single quick cut where he reaches for an underwater oxygen mask shortly after being dunked.

The following scene is nothing short of excruciating, with Alex being on the receiving end of some good old ultraviolence. He writhes helplessly as one officer holds his head under, whilst another pummels him with an (albeit plastic) police baton.

Despite claims to the contrary, McDowell has never reported being close to drowning or experiencing any equipment failure whilst held under the surface. But that’s not quite as good a story is it. Although the water was reportedly ‘browned’ by the addition of a few popular beef stock cubes. Mmmm.

Warning: do not try this at home. Or at the cinema. Or anywhere.