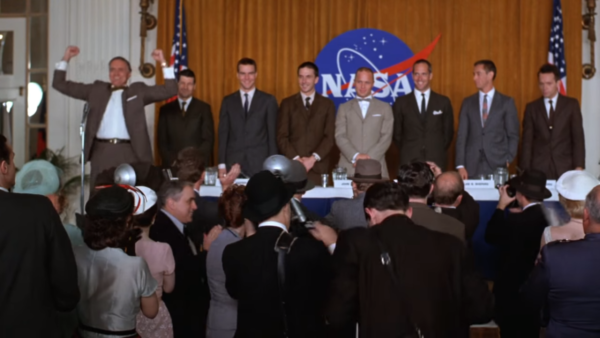 Years before Armstrong made history by setting foot on the lunar surface, a select group of men were chosen to make the initial potentially dangerous trip past the edge of Earth’s atmosphere into space itself, with the Moon firmly set in their sights as the eventual destination. These men became known as the “Mercury Seven” and it is their tale that is the focus of Philip Kaufman’s epic historical drama The Right Stuff.

Based on the book by Tom Wolfe, The Right Stuff tells the story of the beginnings of the American space programme, from the test flight of the Bell X-1 by pilot Chuck Yeager in 1947, through the various heartaches, setbacks and triumphs of the men dubbed the Mercury Seven as they embarked upon the mission to send an American into space.

Depicting the intricate complex history of the early American space programme would be a daunting and seemingly impossible for any film-maker to take on board. While perhaps not as well known a film-maker as someone like Kubrick, writer/director Philip Kaufman proves himself to have (apologies for this next line) “the right stuff” when it comes to embarking upon on this mammoth undertaking, with his script managing to effortlessly compress almost two decades of history into a coherent and engrossing story that despite clocking in at 3 hours still manages to feel like a fast-paced and exciting adventure. 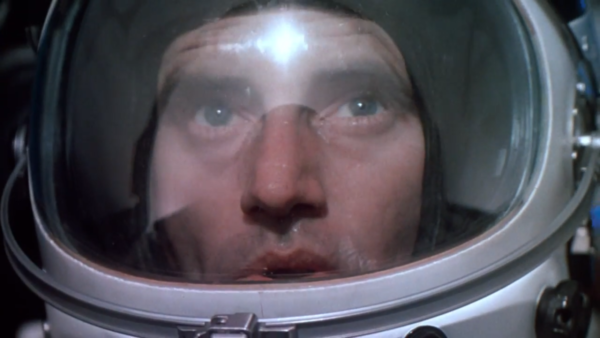 While not necessarily heavy on action, The Right Stuff is chock full of intense and exhilarating set pieces that demonstrate the intense and often dangerous mission that the Mercury Seven where undertaking in an effort to get into space, with the men encountering all manner of wonder, excitement and often terror when things don’t go according to plan.

The orbit of John Glen (Ed Harris) is an especially fearful sequence as an error with his crafts heat shield looks set to send him hurtling back to Earth like a deadly fireball. It’s a terrifying scene that, thanks to Kaufman’s direction and the expert editing never lets up with the tension and fear, leaving you gripping your seat, almost as if you yourself are hurtling back to Earth.

The scene’s climax is also an example of the film’s incredible editing as it looks like Glen is about to smash down to Earth before it smash cuts to him being celebrated as a hero in a parade. The scene is that damn intense and brilliantly constructed and executed that even though anyone with a basic knowledge of the space programme knows that Glen would survive his orbit (living ultimately until the ripe old age of 95), you still can’t help but be worry if he’ll make it back alive. 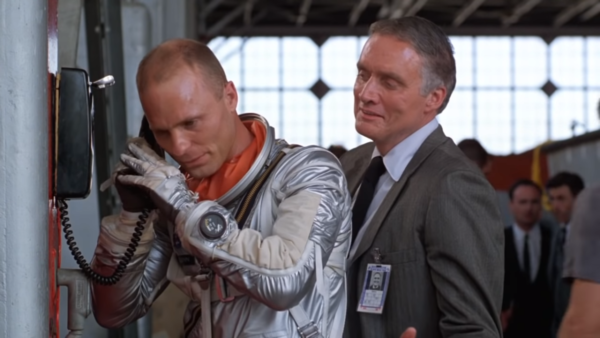 My favourite set pieces, however, come in the form of the flights conducted by ace fighter pilot Chuck Yeager (Sam Shepard) who takes flight in various supersonic aircraft as part of his mission to smash through the sound barrier, often damn near killing himself in the process.

The minute Yeager hits the throttle on his jet will have you tensing up and hoping you don’t soil yourself, with the POV shots giving us the most terrifying view possible as Yager hurtles through the clouds head first towards the sound barrier.

Telling the story of America’s first astronauts requires a cast that possesses (sorry again) “the right stuff”, with the real-life heroes thankfully being brought more than ably brought to life by the film’s superb ensemble cast. 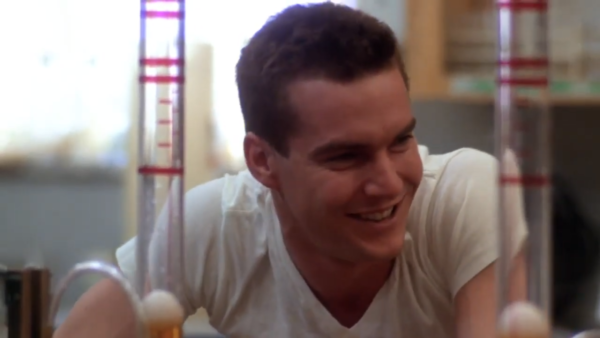 While it would be difficult to go through individually and critique each performance (the film is packed enough as it is) a handful stuck out for me. I especially enjoyed Ed Harris’ heroic and charismatic turn as John Glen and I also throughout enjoyed Scott Glen’s dry-witted and very funny portrait of Alan Shepard, with him almost stealing the film entirely.

The finest performance of the film though belongs to the late great Sam Shepard who accurately replicate the quiet low key confidence of Chuck Yeager, a pilot who, despite his skill and reputation as among the best pilots out there, never went into space. It’s a terrific performance that earned the actor/playwright a well deserved Oscar nomination in the process.

You would expect a film like this with its grand historical story concerning the Space Race and the Cold War political ramifications of such a race, a matter of the utmost seriousness that one make for a stern straight faced drama. However, The Right Stuff goes for an approach that while suitably dramatic, often feels more akin to a comedy than a straight-laced space drama with the litany of comic highlights keeping the the pace racing along throughout the long runtime.

Scott Glen’s portrait of Alan Shepard is probably the most overtly comic, with the character enjoying many of the film’s funniest moments. Such as a race against time to prevent an enema related “explosion”, his demands to be allowed to pee in his spacesuit after having his launched delayed while suffering a full bladder, or his quiet private plea (overheard by everyone at mission control) to “please don’t fuck this up”.

Boasting superb performances all round and an epic story that miraculously manages to be exciting, terrifying and surprisingly funny in equal measure, The Right Stuff is essential viewing for the depiction of space travel on film and suffice to say comes highly recommended.

Here’s hoping National Geographic’s upcoming TV miniseries adaptation can capture the same spirit of adventure while also managing to fill in the gaps left by the film. Or, if I may paraphrase Alan Shepard; please don’t let them fuck it up.