With so much attention aimed towards December’s release of Star Wars: The Rise of Skywalker, it might be easy to forget Disney XD’s animated series Star Wars Resistance is also returning. A trailer for the upcoming season has now been released which reveals the villainous Kylo Ren will be making an appearance in the series. However, along with the trailer came the announcement that Star Wars Resistance‘s second season will be its final one and will have its season premiere October 6. Watch the trailer below… 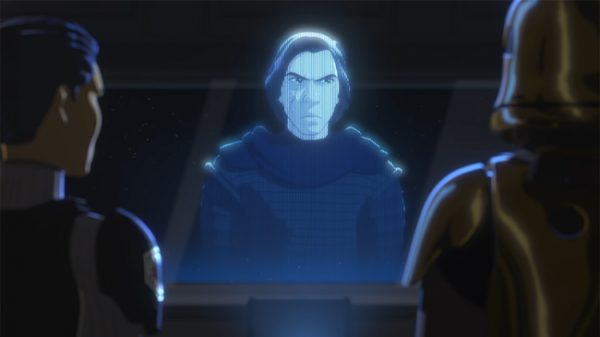 Star Wars Resistance‘s second and final season takes place between The Last Jedi and The Rise of Skywalker, picking up after a harrowing escape from the First Order, as the Colossus and all its residents find themselves lost in space, pursued by Agent Tierny and Commander Pyre. Kaz and team also face a myriad of new dangers along the way including bounty hunters, a suspicious Hutt, General Hux and Supreme Leader Kylo Ren. Meanwhile, Tam grapples with her future and where her true allegiance lies, with her friends or the First Order. The thrilling final season will showcase how the unlikeliest of heroes can help spark hope across the galaxy.

Star Wars veteran Matthew Wood, who voiced General Grevious in Revenge of the Sith and The Clone Wars as well as being Lucasfilm’s sound editor, will voice Kylo Ren for Resistance. Also joining the series is Joe Manganiello (True Blood) as Ax Tagrin, Daveed Diggs (Hamilton) as Norath Kev and Lucy Lawless (My Life is Murder) as the Aeosian Queen.