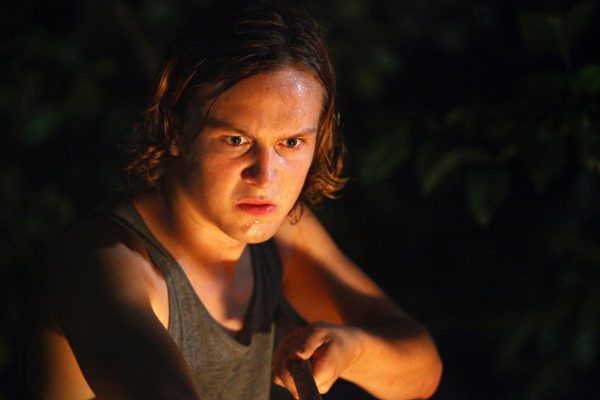 The past few years have been big ones for Logan Miller. Between such high-profile projects as A Dog’s Purpose, Love, Simon, Escape Room and even a four-episode stint on The Walking Dead, the former Disney XD actor has shown off his wide range of talent in everything from family-friendly entertainment to white-knuckle horror-thrillers. But before any of the aforementioned titles were released, Miller brought his charm to a small, spunky desert island horror flick, that after years on the shelf is set to see release this Friday.

The latest effort from Blumhouse Productions (and distributed by Cinedigm), Prey, will be coming to select theaters and VOD; it follows Miller’s recently bereaved Toby as he finds himself seemingly all alone on a tropical island for a couple of days of self-reliance and rehabilitation. As he quickly finds out, however, the island holds a sinister and mysterious past.

Directed by Maniac and Amityville: The Awakening’s Franck Khalfoun, much of the film, which has a small ensemble, rests on Miller’s shoulders, who is in just about every scene, oftentimes by himself. Flickering Myth spoke to him about acting without a scene partner, what it’s like working on a lower budget film, his upcoming projects and more in a one-on-one conversation.

So you’ve clearly had a lot of forays into the horror genre, between Walking Dead, Scout’s Guide, Escape Room and now Prey. What is it that draws you to the genre?

Logan Miller: Honestly, the unique sensibility that the genre has. Every project tends to have something news in the way that these stories are told. They’re fun. It’s films that I think I would want to see in theaters. And the horror genre right now is making such a wonderful resurgence, in that it’s not just slasher flicks anymore, it’s these kinds of cerebral stories that are being told. You know, life’s brutal, and this is a great outlet for me — get out my aggression.

You mentioned the revitalization of horror, and I feel like one of the studios leading that revitalization is Blumhouse. And of course, this movie was produced by them. What was it like being a part of a Blumhouse Production? Did you have any notable interactions with Jason Blum, and how did this experience differ from other horror movie experiences you’ve had?

Miller: While Jason [Blum] did have his fingers in this film, he also worked hand-in-hand with another producer at Blumhouse named Couper Samuelson. And he was amazing, very hands-on. With Blumhouse, they kind of have this great model of giving filmmakers budgets and letting them, kind of, run wild with them. And so, [we] really had freedom to play, and it wasn’t a by-the-book set experience at all. It was very different, unique. We were in the jungles of Malaysia for crying out loud. It really felt like almost going back in time. Like, we were doing something almost illegal in these jungles. It really was a fully immersible experience, and the fear that you see in this movie, a lot of it, kind of, was real. We’re in the middle of all of this shit. I really got to have a firsthand experience of what this character might be going through. 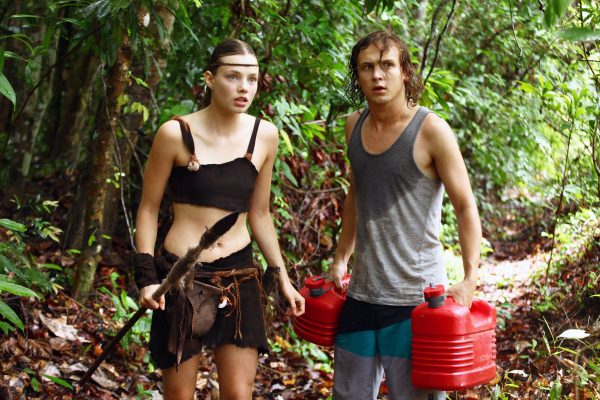 I heard you shot the movie on Langkawi Island in Malaysia, were there any particularly memorable stories or experiences you had while on the island shooting?

Miller: Yeah, several. It was pretty dangerous, to be honest, but being able to do actual scenes, like, out in the ocean and being inside this jungle — I remember we had some crafty on set… and these monkeys are just around spectating us. And they’re watching us as if they’re tourists that are seeing a movie happening in front of their eyes, and they definitely did steal shit from us as well. Which, you know, they’re allowed to — it’s their environment. So they steal an apple and an orange, that’s the payment that we have to give them.

I feel like desert island horror is a subgenre of horror in and of itself. Were there certain horror movies or desert island films that you watched in preparation for Prey?

Miller: This movie does start off, kind of, like in a Blue Lagoon experience, so I did watch a little bit of that. I thought initially the script, the original script felt very Blue Lagoon meets Fatal Attraction to me actually. Kristine [Froseth] and myself watched a couple films like that. And even though it’s the Vietnam War and everything, I watched Apocalypse Now, because they were fully immersed inside the jungle within that film, so I wanted to watch something like that to invoke that feeling.

I mentioned a few of your other credits before, and most of the films that I listed are kind of larger ensemble pieces, but Prey really requires you to do a lot of acting by yourself. How did you approach acting alone, and how did it challenge you?

Miller: It’s interesting cause you have to physically show what’s going on. It’s, kind of, an experience that I’m sure Tom Hanks probably endured with Cast Away. I really wanted to try to make that stuff very natural, and not just speak out what the actions are, but just experience it. I do speak to myself alone sometimes, but a lot of my alone time is very internal, so I wanted to try to portray that, as natural and as real as possible.

What kind of survival training did you take part in to tackle the role of Toby in this movie? He becomes a man of the wilderness in a certain sense.

Miller: The film itself was the survival guide. And the character starts off not knowing how to survive, so that’s what was actually portrayed in real life. We didn’t give myself much training because I wanted to have that feeling of being a fish-out-of-water, and then by the end of it, Toby has kind of taken control and learning his survival skills. And so I was adapting to that as we were shooting. We filmed mostly in sequence. Being in the jungles for two months, you learn a lot more, and so I, kind of, felt that. We did do a lot of swim training though, based off of all of these water scenes that we had to do. I had to do training with regulators, and I had to do a lot of breathing exercises, in order to be able to shoot underwater for long periods of time. That was a fantastic experience and a lot of fun. 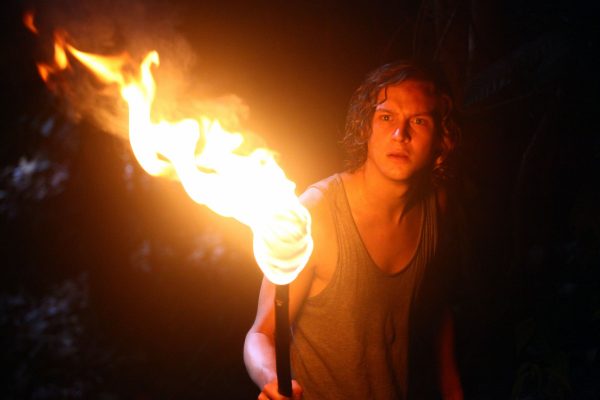 I know on top of acting you have a real passion for a lot of other things as well, like music, comedy and writing. Are you writing any future projects as of now?

Miller: Yes, I am currently. I’m working on an action-comedy that I hope to get the wheels moving called, Prank Call, where [it’s] based upon a group of friends who have a college radio show. They accidentally prank the wrong person and end up putting an assassination hit on one of their best friends, and they have to kind of get out of that situation. It’s something I’ve been working on for the past year, and I am on my fifth draft. We’ll see where that goes right now. Always trying to create new stuff, and this is the next venture into hopefully getting a movie made.

I just wanted to throw in there that I thought Escape Room this year was such a fun and entertaining thriller, and you were great in it. So massive congrats to you on that. And by the end of the film both your character Ben and Taylor Russell’s character are both still alive, hopefully about to beat the odds again and survive the plane escape room. Have you heard any rumblings about a sequel and would you be interested in returning?

Miller: I am heading back into that room in a month. We are in pre-production on that right now. We will be diving back in and hopefully surviving yet again. For what I know, I don’t actually know much, but Taylor [Russell] and I will be coming back and we have a whole new colorful cast of characters. Adam [Robitel] is coming back to direct as well. So yeah, I think the adventure is just gonna be double the pain, I’m sure.

That’s great! I had an amazing time watching that movie, just a ton of fun.

Miller: They really paid attention to the detail of the rooms themselves and the cinematography was our number one priority on that one. So I was very happy with the way it ended up looking and feeling.

I wanted to ask you — is there anything you could tell us about, a movie that I’m anticipating, We Summon the Darkness?

Miller: Yes! We Summon the Darkness is actually going to Fantastic Fest by the end of this month and should be out pretty shortly. It’s a great film because it’s got this whole idea of what happens to people when they are categorized as Satanists, or when you’re a metalhead, the idea that everybody prays to Satan, it’s not completely true. These metalheads meet this group of girls in a parking lot at a tailgate, and they think they’re gonna go back to their house and hang out and maybe get laid, but instead [the girls] are part of a religious cult that is posing all these metalheads to be Satan worshippers. And they torture and kill them and make it look like they’re doing Satanic sacrifices. So basically the power dynamic gets flipped around. This crazy religious cult is putting a bad name on these metalheads, so we have to rebel. It, kind of, invokes the feeling of the movie Green Room. I love that film… instead of skinhead neo-Nazis, we’ve got a religious cult of murderous women.

Obviously, there was a long path between when you shot Prey [in 2016], to when it was released. What were some memorable lessons that you took away from Prey as an actor that you brought with you into the rest of your career [during that time]?

Miller: Expect nothing, I guess, is what I kind of learned from this. Every experience is completely different, and that’s what I enjoy about what I do, is that I get to envelope myself in this experience and have something unique each time. This was probably the hardest to have to experience because we were out in the wilderness, shooting in the jungles, and so, if I survived that I can really survive anything. It really sets the bar pretty high as far as intense experiences. It made me appreciate human amenities that we have on bigger budgets, to be honest.

Prey, a horror-thriller from Blumhouse & Hyde Park with Director Franck Khalfoun (Amityville: The Awakening), follows Toby Burns (Logan Miller), a millennial coldly floating through life and disconnected from his family. After his father is tragically killed in a carjacking, Toby is left stricken with guilt. He is begrudgingly enrolled in a “Lost and Found” program, in which he will spend three days and three nights on a remote jungle island. Toby soon finds that this “uninhabited” island is not so lonely when he meets a mysterious girl named Madeleine (Kristine Froseth). It soon becomes clear that neither of them are safe here and time is running out. Someone or SOMETHING bloodthirsty lurks in the jungle, and Toby must find a way off this island before becoming its PREY.

Many thanks to Logan Miller for taking the time for this interview.