Alan, Red, and Smitty spend high summer on the Jersey Shore roving the boardwalk and getting into trouble. But the discovery of good old fashioned treasure sets the friends on an escalating course of suspicion and violence in this atmospheric thriller. 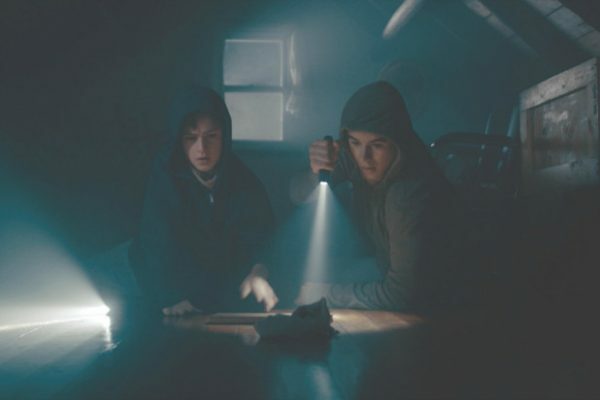 Low Tide initially pitches itself as a study of tourists checking out New Jersey boardwalk sites juxtaposed with the financially unpleasant lives of its locals, quickly abandoning that intriguing premise and study, leaning full tilt into a story about buried treasure, betrayal, and one-dimensional characters going through the motions no matter how hard the ensemble tries to breathe life into writer-director/Kevin McMullin’s debut feature. This is a movie where a hotheaded sociopath is angry for no reason whatsoever other than that’s his character and is given the unsubtle name Red, which is also pointed out by another character as if it is some genius high point of writing. Red will stab you if you even think about talking to his ex-girlfriend, and hates liars; that’s all you need to know. Alex Neustaedter gives such underwritten material the scenery-chewing performance it deserves, but really, all the talented upcoming actors here deserve something juicier.

Red is the leader of a tight wolfpack comprised of rascals living under unfortunate circumstances (I assume, since we never really see anyone’s parents, although the mother of a pair of brothers is said to be deceased) that attempt forging a better life for themselves little by little as they use a boat to go around to different areas robbing from rich folk. Their only rule is to never steal from locals. Also, Red REALLY hates those aforementioned tourists, nearly ready to stab one of them over their choice of music.

Luckily, group member Alan (Keean Johnson) plays the peacemaker between the two factions. He also happens to develop a crush on the visiting Mary (Kristine Froseth) and clearly wants to live the preppy and carefree lifestyle the others do (Gee, I wonder what will happen when insane amounts of gold are eventually uncovered). Jaeden Martell (formerly Jaeden Lieberher, but nevertheless most known as young Bill from It) is also here as Peter, Alan’s brother, and is the more levelheaded, vastly more intelligent of the siblings. It’s pretty easy to guess which of them behave irresponsibly once becoming rich. Anyway, the gold coins are sort of accidentally discovered, leaving Red and the gang’s other companion, Smitty (Daniel Zolghadri), in the dark regarding the lucrative findings. Alan and Peter don’t necessarily fit in with the other two, seemingly wanting to get away from their unhappy lives and living situation to genuinely do some good for themselves and whatever people around them they meet. Stealing is just a means to an end, and they don’t get an adrenaline rush out of it similar to Red, who is mentally warped and in desperate need of psychological help. With that said, there’s a sheriff (Shea Whigham) on the prowl talking to the three boys, essentially giving them bribes to come forward about the toxic and dangerous behavior of Red so that something can legally be done about it.

It’s all a fine set up until it becomes clear that Kevin McMullin has no interesting idea to further exploring these characters. There’s a violent kid, the obvious snitch, and the good-natured brothers desiring a way out from crime. Low Tide is at its best whenever Alan and Mary interact, as it allows for the sense of two colliding backgrounds and worlds (even if they are small and limited differences) to add a slight amount of depth. Their final exchange is also subversive and open to numerous interpretations; it’s absolutely the best scene in the movie.

However, where it lacks in depth is made up for by functioning as simple entertainment with light twists that, while predictable, are usually fun to watch play out. That goes doubly so considering the commitment from the talented cast. Bring aboard someone to do a rewrite of the script and flesh out the characters, and Low Tide could have made more waves.