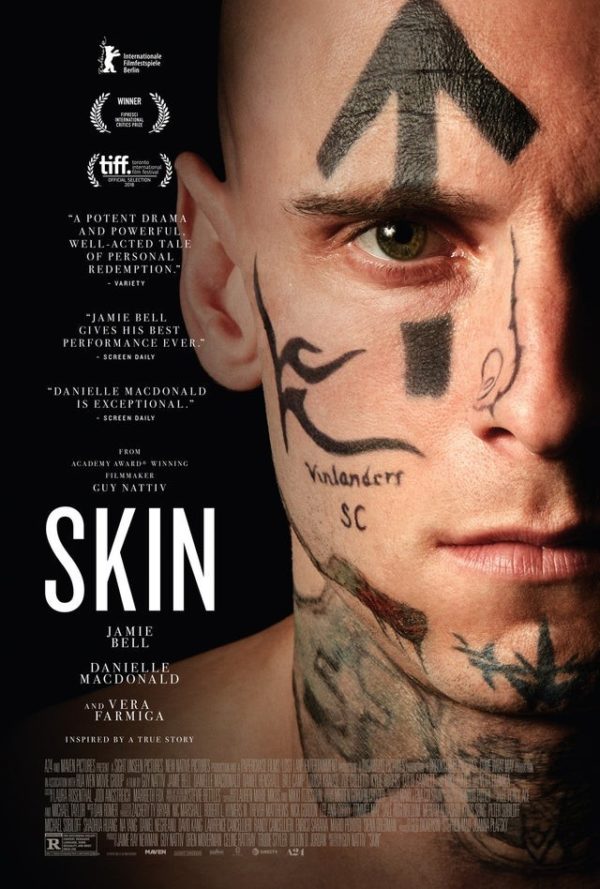 A destitute young man, raised by racist skinheads and notorious among white supremacists, turns his back on hatred and violence to transform his life, with the help of a black activist and the woman he loves. 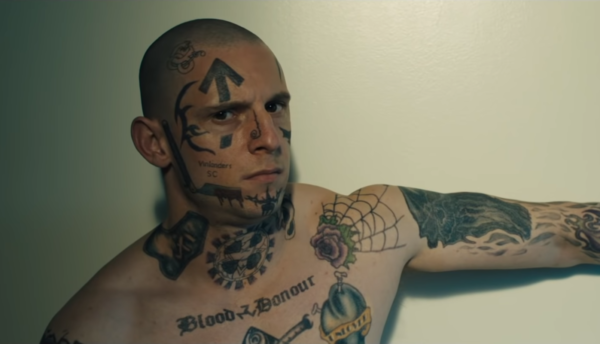 It’s certainly bold to tell a story about a white supremacist reforming and reintegrating back into normal society in the nightmarish state of America we currently inhabit, and that applies regardless of where you fall on the notion that any single person is capable of repenting and avenging their wrongdoings. The really uncomfortable but far more pertinent question to ask with Skin is if we really need to see a narrative about a real-life monster that realizes the error of his ways, changing his life, with the answer being a resounding yes. If you don’t even attempt to understand what makes a monster just that, there’s no way to fight it or make a difference. That’s not to say people need to find common ground with hateful groups, but it does no good for anyone searching for safe spaces to pretend evil does not exist. And what better way to explore all of the above, then with a movie; a dramatization of Bryon Widner’s story.

Jamie Bell inhabits the role in what will surely go down as one of the most transformative performances of the year, and not just due to the obscene amount of tattoos making the actor nearly unrecognizable. Bryon is a repulsively violent person (the opening sequence of the movie showcases a standoff between a white supremacist group and black activists standing their ground, resulting in Bryon slicing open the face of a 14-year-old boy), yet Academy Award-winning writer and director Guy Nattiv is occasionally giving the character quieter moments to show the audience that he is not like the rest. He stands up for a family being harassed, he’s gentle and sensitive with children (a terrifying reminder that humanity does exist within the worst individuals, for better or worse), and at times he is outright conflicted on what he is even doing at the base way out in the middle of nowhere. But it’s all he knows; coming from an abusive background, Bryon was taken in as a surrogate son from the leaders Fred and Shareen (Bill Camp and Vera Farmiga, both intense and controlling). 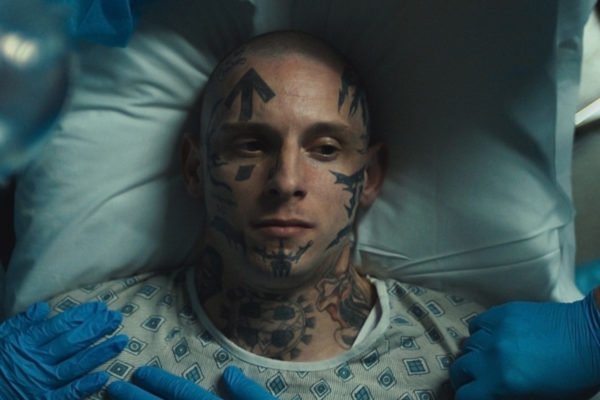 As Bryon continues to hang around Julie (Danielle Macdonald) and her children, it becomes clear that having a family is his way out and salvation. Once having ties to white supremacy herself, Julie is cautious around Bryon, but there is some frustration with the decisions she makes that ultimately do nothing but endanger the children she does love. Shocking no one, it doesn’t go down well with the gang once Bryon tries to cut off all ties; their home is shot up and all-out panic and mayhem break a loose. It’s in this moment (and others) that the most empathetic characters in Skin are the youth that has to deal with this toxic upbringing; they deserve better. When they scream and cry as bullets fly, it’s hard to resist wanting to jump into the movie and run into the house to protect them. Simultaneously, there is a loving connection between Bryon and Julie, which makes everything all the more complicated to judge from the outside.

There’s also a Halloween party where Bryon’s inked face of hateful iconography is covered up by skeleton makeup; it’s the perfect method to visually represent his identity crisis. The closer he gets to Julie, the more his hatred grows for everything he has done to his body, getting to the point where he tries burning off the tattoos with steaming hot water. When the possibility of advanced surgery arises to remove them, he naturally is grateful for the opportunity but painfully poses the thought “what if I’m still the piece of shit even without the tattoos”. It’s a gut punch for sure. 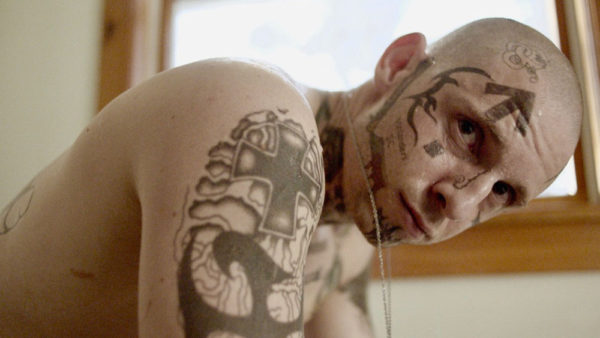 Elsewhere, Bryon secretly communicates with Daryle (Mike Colter) who runs an anti-hate group that believes in trying to convert the white supremacists into well-adjusted functional members of society, which according to the credits went on to become a lifelong friendship. Unfortunately, this aspect is not explored enough as it feels it should be, as the dynamics of a neo-Nazi letting go of his beliefs and associating with nonwhites theoretically writes itself as strong material. There is a warming scene of Bryon shoveling snow with the assistance of some minorities that if nothing else, accomplices the same thing to an extent. Instead, the giving up of information to alternative groups and the FBI leads to some villainous blowback that feels more in place on an episode of Sons of Anarchy than here.

Skin is not going to be an easy watch for many out there, as some of the hate group’s actions go beyond the unthinkable. It also lets us know there are more Bryon’s, roped into the lifestyle as an alternative to horrific living circumstances; the group practically preys on similar individuals, young and old, to do their bidding. Bryon may have escaped, repented, and found a life worth living while encouraging others to do the same, but Skin pulls no punches that getting involved with these types is entering a dangerous world. There is no logic behind the hatred, however, the ones essentially forced into doing this dirty work are worth trying to save and forgive. Skin is an ugly, upsettingly heinous movie, but a necessary one.