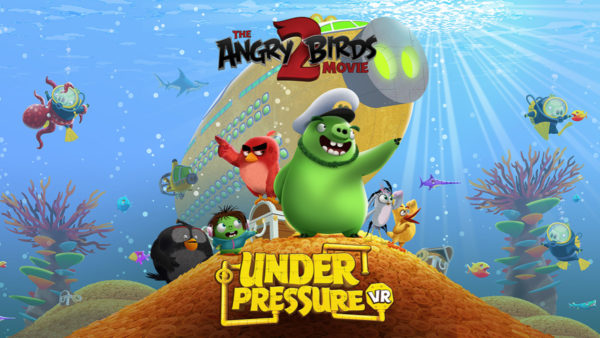 When Angry Birds first hit the scene it was a cultural zeitgeist. In a world just discovering mobile gaming, we were hungry for an engaging bite-sized game that we could play anywhere and Angry Birds scratched that itch with it’s physics based destruction and a gameplay loop that was easy to learn but required strategy to get the best score possible. That coupled with a 99 cent price tag meant it could be found on practically every smartphone ten years ago. So why, here in 2019, are they releasing a game at 35 times the price without a quarter of the design and gameplay hook that shot the original to prominence?

Mikael Hed, former CEO of Rovio Entertainment once stated he believed their empire could rival that of Disney’s. I certainly appreciate the scope of his dreams but it was a little grandiose for a studio that had one hit game after years of releasing titles that no one had cared about. This led them to believe they could develop computer animated films on the back of the strong personalities of their titular birds and the villainous pigs that were mostly guilty of standing in one place in their terribly built homes. I guess they stole some eggs too but could you really blame me for not having remembered the epic lore of the Angry Birds series? Well, it worked. Making $352 million US on a $73 million budget made it a success and has led them to the next logical step in the video game/film cycle: the game adaptation of the film. 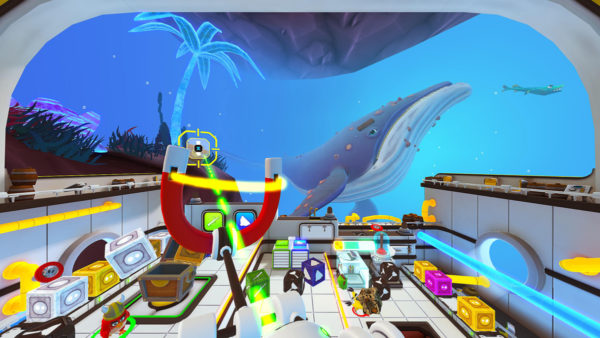 The Angry Birds Movie 2 VR: Under Pressure is a VR based family-party game where it’s designed for one player in a VR headset to ride on-rails while shooting plungers and torpedoes at obstacles and treasure while supposedly the rest of your family works inside the sub to feed you ammo and sort treasure. On paper this seems like the type of game that should have you and yours entertained for a solid evening most likely never to touch it again. The best way to describe the intent of this title is Overcooked, but one person plays as an overseer shooting food at patrons from VR. Sure, that may sound rad but in practice it all falls apart. What you’d normally get from a party game of that nature such as controls that you’re fighting against or cramped areas where you’re struggling to accommodate the players involved are all absent. What this leaves behind is just a couple of players walking around leisurely doing menial tasks while the lucky headset user gets to smash the X button to reel in treasure. And that’s it. That’s the game.

There’s nothing deep here at all. It’s absolutely mindless and I honestly can’t find the target audience here. At first glance it’s obviously for family’s where you can have multiple people all working in harmony but the problem is that nobody would have fun with this. The over-simplified gameplay leaves the helpers bored while the captain goes through the motions of trying to get a high score while being completely oblivious to the boredom of those on the couch next to them since their vision is obscured by the headset. Now you might be thinking the fun part would be to have the child in the headset while they’re enjoying the simplistic VR shooting and the parents or siblings run around assisting them just to make sure the youngen is having fun. Sure, that could be the case but I must remind you that kids under 12 aren’t supposed to be using VR and I’d be hard pressed to find anyone over that age who could derive enjoyment from riding a boring roller coaster while grabbing treasure chests and shooting torpedoes with minimal control. 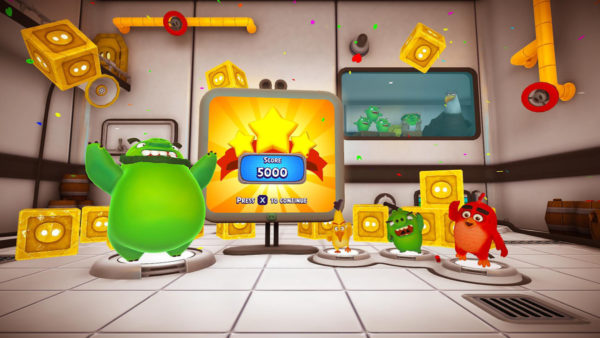 Now I played a little of this game with a co-op partner to get a good feeling for how this is meant to be played and that’s how I drew the conclusions you’ve read above. However as you may have surmised the game couldn’t keep their attention long enough to coerce them into beating the full game with me. So everything from level 4 on was played solo. And oh boy…, don’t even bother. In solo mode you’re tasked with controlling a helper and captain pig at the same time. Were there some clever control scheme implemented so you could do both simultaneously It might not have been so bad. There are enough buttons on that controller that this was entirely possible as you only use three buttons each for the characters. But that’s not the case here. Instead, you have nothing but a button to switch between bird and pig leaving tasks going ignored as you’re playing one or the other. That amps the difficulty up for sure, but not in any entertaining way. It becomes pure tedium as you’re deciding which objective to ignore and reside yourself to a one star performance for each level where you’re rewarded with your characters sarcastically clapping for you but honestly, I prefer that over having to look at a dabbing bird for performing well.

I honestly wish I had better words for this title. I love VR gaming to the point I’ve bought far more games than I should have for the PSVR platform. I truly enjoy being immersed in my gaming worlds and being introduced to entirely new ways to play games but The Angry Birds Movie 2 VR: Under Pressure does absolutely nothing to justify being in VR. Everything happens directly in front of you and even is showed on the display screen for the second player. Your head movements don’t change where you’re firing and do nothing for the perspective of your character. This honestly feels that it was made in VR merely to take advantage of the fact that there is a seeming drought of VR titles and Rovio knows that most VR enthusiasts will generally buy anything that pops on the store just to have even more virtual experiences to enjoy. And honestly, that’s the worst thing about this game. I have no idea why it exists aside from wanting to make money. Even the fact that it has a physical release screams to me that they are wanting parents who are buying VR for their kids come Christmas to recognize that Angry Birds is a known game and pick it up to fill out the box. If that’s your intention, go ahead and buy it used for half off during a sale. That’s the only way I could justify recommending this game to anyone. 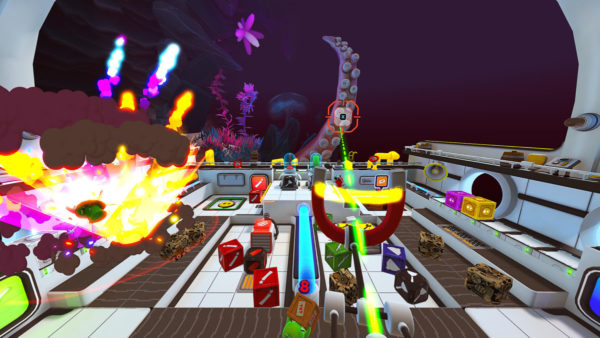 Pros:
+Short playtime
+No replayability
+Even the youngest in your family will probably get bored with it and let you stop playing before it’s finished

Cons:
-Dreadfully dull
-Cutscenes are in 2D for VR users
-Solo play doesn’t account for not having a helper
-The game literally opens with a trailer for the film

Gerald James – One half of Mushbrains Media and Mushbrains: The Podcast, Flickering Myth’s gaming podcast