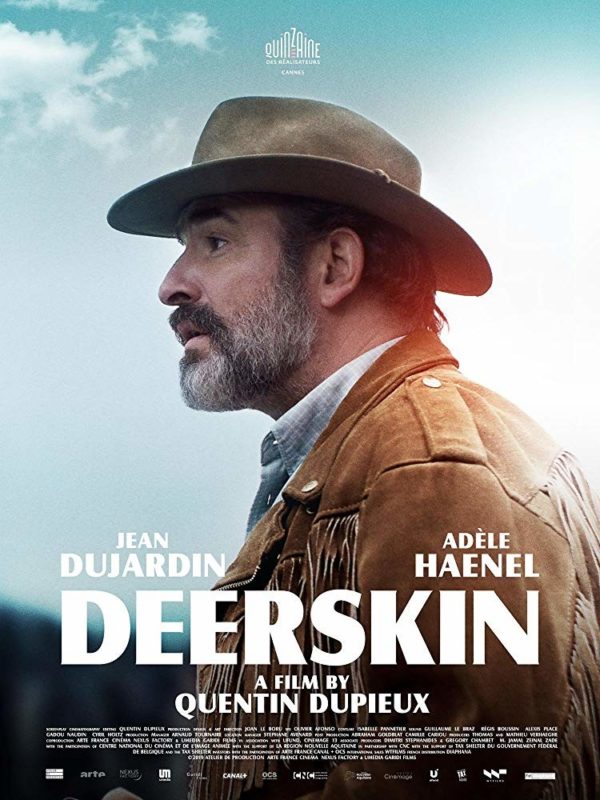 A man’s obsession with his designer deerskin jacket causes him to blow his life savings and turn to crime. 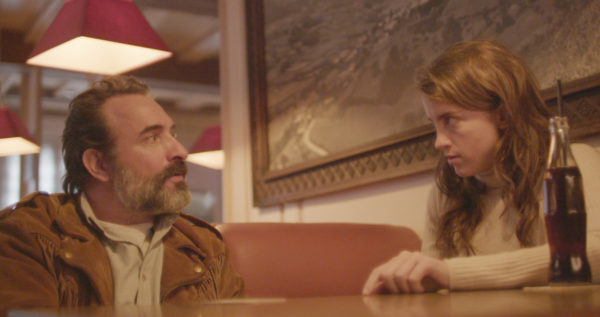 Sometimes a film comes along which is simply impossible to pigeon-hole. It refuses to nestle into genre’s well-rounded formula, and instead negates its own uncertain path. This is very much the case for Quentin Dupieux’s (Rubber) beguiling oddity, Deerskin. A fiendishly funny, deliciously absurd saga of a man who, well, falls hopelessly in love with a coat.

Sorry, it’s probably sacrilegious to refer to the eponymous deerskin jacket as a “coat”, because it’s not; rather a fully realised character in itself. One which forces a rugged, world-weary Jean Dujardin (looking deceptively like Eric Cantona with that beard) into an unprecedented high-stakes mission: for his beloved jacket to be the sole jacket in the world.

Dujardin – a modern master of physical comedy as evoked in his Academy Award winning performance in The Artist – is delightfully macabre as Georges; our protagonist, who travels to the farthest fringes of France to purchase the deerskin jacket from an unknown trader. It costs him a small fortune – enough for his estranged wife to put a block on his end of their joint bank account. Georges, now somewhat stranded in the middle of nowhere, decides to check into a craggy hotel for an extended period; often exchanging personal items to cover his debts. 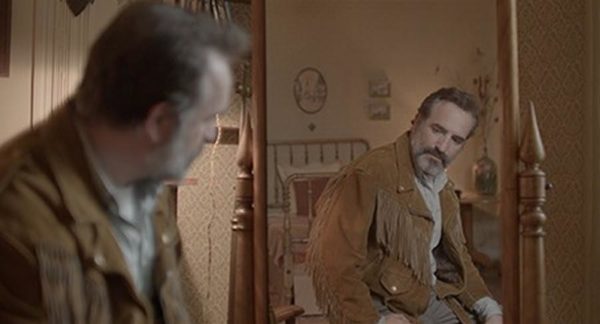 During the life-changing transaction which brings Georges his signature “killer style”, the seller also kindly throws in a like-new video camcorder. This addition to his light arsenal will play a vital part in proceedings, as an illogical web of lies he spills to attentive waitress Denise (Adèle Haenel) will forcibly lead him down the road of producing his very own feature film.

Those familiar with Dupieux’s previous work will know his adoration for breathing life into inanimate objects. His nimble, sure-footed script is packed with eye rolls and belly laughs as the audacity of his film’s silliness reaches boiling point. From the opening frame to the final, Dupieux commits to his warped narrative, and never takes his foot off the gas for a second. This in truth would be fairly difficult to achieve anyway, given that the film’s blistering duration barely scrapes 77 minutes.

There is no room for exposition or world-mapping; instead he takes us straight into the good stuff, and boy is there a lot of it. Deerskin is unequivocally one of the most gloriously bizarre films one has seen for a long while. From its laugh-a-minute screenplay, to its fire-cracker performances, it is a microcosm of madness to cherish. To reveal details of the film’s progression would be to its detriment, but those taking their seats for the ride will be thrust into a chaotic crescendo of snuff and obsession. You’ll possibly feel slightly terrible too, as you roar with laughter at some of Georges’ demented actions. 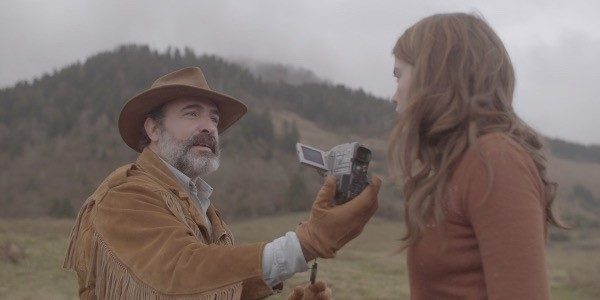 The chemistry shared between Dujardin and Haenel is quite simply bliss. Georges’ feverish intensity – often exploding with sudden fits of madcap rage – is perfectly offset by Denise’s wide-eyed ambition and thoughtfulness. She dreams of being an editor you see, and because Georges is such a terrible liar, he’s now kind of stuck with her. It’s a sheer pleasure seeing Haenel take on a looser, more humorous role, too. She is garnering thunderous acclaim for her work in Cèline Sciamma’s sumptuous romance, Portrait of a Lady on Fire (also playing at LFF), and she previously chewed up scenery in the Dardennes’ medical drama, The Unknown Girl. Here we see a softer, more playful side to her repertoire, and she completely nails it.

As previously mentioned, Dujardin’s physique lends brilliantly to his character – one who glides through the many bonkers scenes; stealing glimpses of his reflection in every car window and mirror in his path. As his undying love for all things 100% deerskin heightens, as does his theatre – with the role becoming more pantomime with each sequence. It is extremely clear that he, and indeed everyone involved, had a blast filming because the joy radiates from the screen.

Perhaps the best compliment one can give Deerskin is this – it’s the kind of feature which epitomises the importance of film festivals. Kooky, without restraint, and uncategorisable, it is a treat simply waiting to be discovered for those who make the effort to seek it. LFF’s Cult strand has been going from strength to strength in recent years, and Dupieux’s dynamic and devious entry is among its best offerings in 2019. Just do everyone a favour, and leave your jacket at the door…

Deerskin screened as part of the Cult strand at BFI London Film Festival 2019. It arrives in UK cinemas via Picturehouse Entertainment in May 2020.