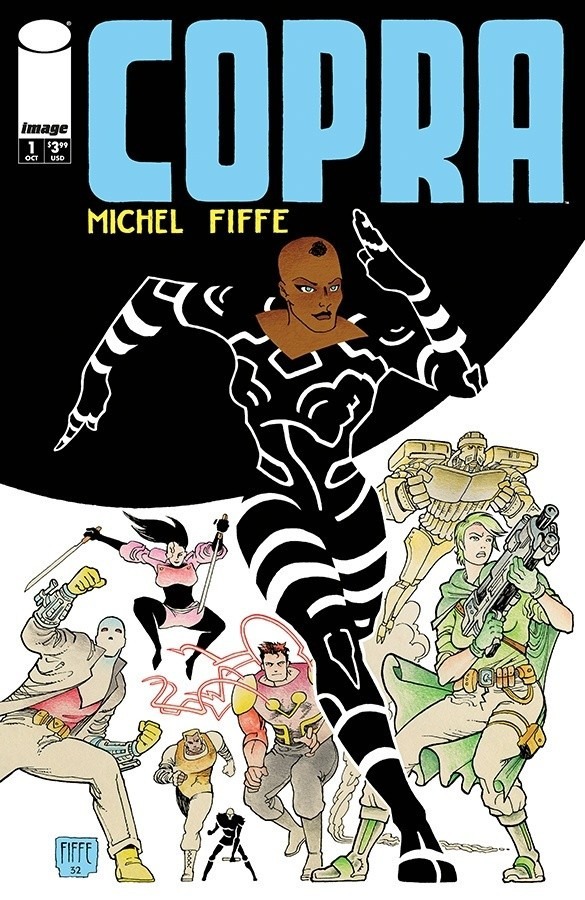 Why start in the middle if you can start at the beginning? Most of the time I’d say that was a rhetorical question, and the first five volumes of Copra (which were originally self-published by series creator, Michel Fiffe) are available now from Image Comics, but this is where having Image+ magazine came in handy. Most comic previews can be found online, but if you don’t think a comic is for you, you’re not going to look it up. With a magazine, you’re going to read the whole thing and that’s how I found Fiffe’s miniseries, Bloodstrike: Brutalist.

Unlike Copra, Bloodstrike takes a little more research, if you want to start from the beginning. Fiffe’s series was also filling in a specific gap in the series – issues #0, 23, and 24 – which does not sound promising, if you’ve never read the series before. Fiffe specifically designs his issues to be accommodating to new readers, though, while also keeping ongoing storylines alive for the fans who have stuck around.

Had I not read Brutalist, I probably wouldn’t have picked up Copra #1 (which is actually the thirty-second issue of a brand new arc), without reading Copra Volume 1 first, but the reason I’m talking so much about the numbering, and haven’t even explained what the series is about yet, is because there aren’t many series, like Copra, that encourage you to jump in at the middle. It’s a unique experience and one that’s worth trying, regardless of whether you change your mind later.Some comics may announce a new arc’s starting or that an issue is a jumping on point in the solicitations but Fiffe (as writer, artist, colorist, and letterer of Copra) really considers accessibility when he puts each issue together.

In the back matter for Copra #1 you have character profiles and a “Catching Up With Copra” recap that’s thirty-one panels long (one panel for each issue). On the back of the front cover there’s a line-up of the main characters and then again, in the issue, he names each character once so that when Jaquio, the bounty hunter, appears without his mask you can still recognize him.

Fiffe doesn’t make it easy for new readers. You have to take your time and pay attention, to what’s going on. More than the plot, which is very action-y, it’s about identifying the different relationships between the characters – which characters are close, which characters don’t get along. If you’re willing to do the work, the clues are there (in one scene it’s a birthday cake that tells you whose thoughts you are seeing), and it’s not frustrating. Everytime you figure something out it feels like a huge accomplishment.

So, what happens this issue? On his website Fiffe calls Copra “a group of mercenary misfits” and this first issue opens with them taking a “post-mission breather.” Spread out across three rooms, gunshots go off in the motel where they’re staying, and you get to see who goes to help and who doesn’t. There’s betrayal and plot twists. Fiffe is really good at laying out the rooms spatially. There’s this one time when some of the team are walking around a building and Fiffe cuts the panel in half so things aren’t happening simultaneously. Instead of black for darkness he uses navy blue, which feels more dramatic, and at one point, instead of drawing all of the characters talking he uses different colored speech bubbles so he can show their conversation in a way that’s more condensed.