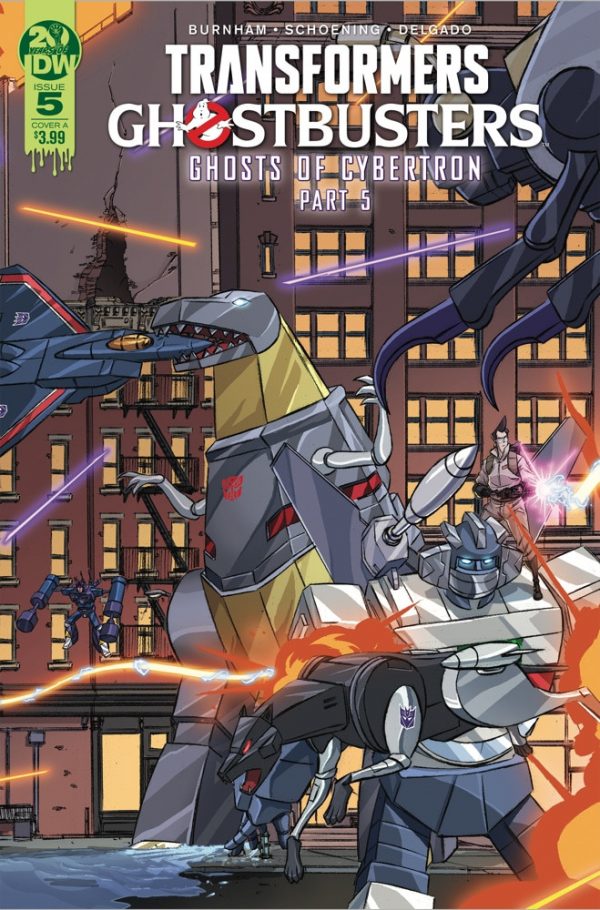 As Transformers and Ghostbusters continue their 35th anniversary celebrations, IDW’s crossover Transformers/Ghostbusters series comes to an end as Optimus Prime, Ectotron and the Ghostbusters worked together to stop the ghostly forces of Megatron and his Decepticons. There was a lot of potential for this crossover which writer Eric Burnham definitely met, making a pretty entertaining send off to the title with fun interactions between the characters and action scenes.

Most of the finale was taken up by the climactic battle between the Ghostbusters and transformers. With so much time dedicated to the action, it could have felt rushed or tired after a while, but Burnham finds clever ways to keep it fresh and entertaining. Moments like the Ghostbusters fighting off Soundwave and his cassettes or Ray having to use slime on a possessed Ectotron were great little parts that elevated the conflict. Nothing felt overly rushed as the battle moved at a fairly steady pace, though it would have been nice to see a few more Decepticons take part in the fight or Shockwave actually get contained. It was also interesting to see Soundwave and Shockwave, two of Megatron’s staunchest loyalists, disobey him at first from fighting. Their switch to taking on the Ghostbusters felt a bit illogical given their motivations and especially coming from Shockwave, though the moment was also pretty humourous given their desire for something different after years spent as ghosts doing nothing.

The balance between all the characters was fairly nice as Burnham utilized them well. The Ghostbusters got a little more time than Optimus or Ectotron did, but their dialogue was in character and fast-paced. Optimus had some good moments too, but Burnham’s take on Megatron was the highlight of the issue. He felt very much like the Generation 1 Megatron with his spitefulness, caring more about his revenge than the possibility of gaining a body back by working with Optimus. The interactions between the cast was fun and energetic, never feeling like the comedy of their banter was too much. Out of everything in this series, Burnham’s character work was the best aspect of it and he didn’t let it slide for the finale.

Dan Schoening’s artwork is very fluid and animated with plenty of detail in his panels to pour over. His work on the various bots is great, particularly on Soundwave and Megatron, including his brief upgraded form. With so much going on with the action, more so than any other issue in the crossover, Schoening displays a good sense of placing the focus where it needs to be and creating some dynamic imagery. Luis Antonio Delgado’s colours make several of the visuals pop. The spectral forms of the Decepticons stand out very much thanks to him. It might be the most vibrant issue of the crossover given the level of detail in Schoening and Delgado’s work, making it that much more fun to flip through.

Transformers/Ghostbusters #5 was a worthy conclusion to the crossover due to Burnham’s balance of the characters and fast-paced action. He captured the voices of the transformers pretty well, even if there were a couple brief moments where some felt out of character. The artwork from Schoening and Delgado elevate the story, making it very nice to simply look at. Fans of both franchises will probably be happy with how the crossover concluded and the tease for more possible adventures between the two.