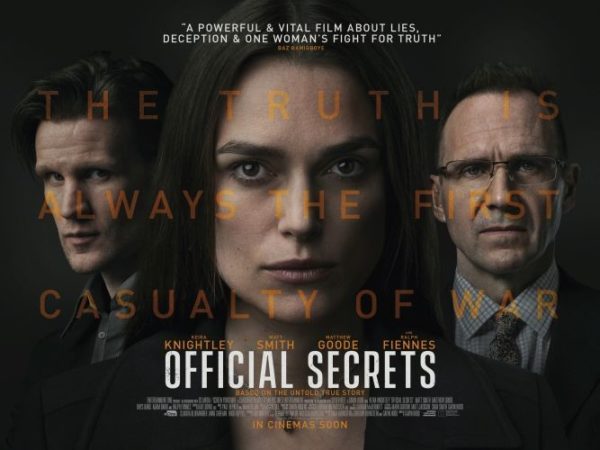 A GCHQ employee leaks a top secret memo to the press in the run-up to the Iraq War, sparking criminal proceedings against her that resonate on both sides of the Atlantic. With one slippery former prime minister currently fumbling his way through whatever form Brexit is taking this week and another spinning from chat show sofa to radio studio as he flogs his new book, now seems like a good time to put another one under the spotlight. The leader in question is Tony Blair in new political thriller Official Secrets, which dramatises the true story of the leak from within GCHQ of a damning Iraq War memo. In the director’s chair is Gavin Hood, whose last film was the tense, talky drone warfare thriller Eye in the Sky.

Keira Knightley portrays GCHQ translator Katharine Gun, who takes matters into her own hands in 2003 when she and her colleagues receive a questionable memo urging them to dig into the communications of UN offices in key member countries of the Security Council. These votes are crucial in the upcoming ballot aimed at facilitating a US-UK invasion of Iraq. Gun makes a copy of the secret memo and, via an anti-war campaigner friend, it finds its way on to the desk of Observer journalist Martin Bright (Matt Smith). When the story hits newstands, the fallout is immense, on the journalists and on Katharine, who finds her Kurdish husband Yasar (Adam Bakri) threatened with deportation and turns to human rights lawyer Ben Emmerson (Ralph Fiennes) to fight her corner in court.

Just as in Hood’s previous film, Official Secrets does an impressive job of conveying immensely complex issues of geopolitics and morality into a fast-paced thriller. The script, co-written by Hood with Gregory and Sara Bernstein, keeps the pedal to the floor in motoring through the circumstances of the leak and there’s a palpable, frenetic urgency to the boots on the ground journalism from the Observer’s investigative team, powered by Smith’s slightly smarmy reporter and Game of Thrones alumnus Conleth Hill’s cartoonishly sweary, but always entertaining, take on then-editor Roger Alton. Knightley is very much the heart and soul of proceedings and she peppers the movie with sparks of righteous fury. Her take on Katharine is of a fiercely principled woman driven solely by the guiding light of her moral compass. She believes Tony Blair to be a “bloody liar” and objects to being asked to be complicit in facilitating an illegal war. Scenes in which she is interrogated by the police see her eyes turn steely and focused as she fights her corner, while she refuses to allow her lawyers from the pressure group Liberty, led by Fiennes’ pragmatic old hand, to convince her that a guilty plea with hope of mercy is the best option.

Her performance helps to elevate Official Secrets beyond its outward status as a pretty conventional thriller. It shares a lot of DNA with recent awards season darlings like Spotlight and The Post but, just like those films, this is a movie that couldn’t be more timely in communicating the power and importance of legitimate, investigative journalism. This film’s journalism is thorough, cooperative and ceaselessly curious, with every member of the Observer team bristling with excitement – perhaps a little too much in the case of Rhys Ifans’ massively broad turn as US Correspondent Ed Vulliamy.

This feels like a valuable film for the age in which we currently live. When Katharine states of Blair that “just because you’re the prime minister, it doesn’t mean you get to make up your own facts”, she could just as easily be talking to the current leaders on both sides of the Atlantic. The plight of Katharine’s immigrant husband is handled with sensitivity and provides a further emotional core with its own resonance given the current president’s approach to those he believes to be in his country illegally. Every narrative stone the film turns seems to yield another facet of timely storytelling. With Official Secrets, Hood has made a film with political resonance, but one powered by a kinetic sense of style and full-throated performances, illuminating and transcending a story that could quite simply have been just another political thriller. It’s a punchy take on its central narrative that, even when it trades in story beats audiences will have seen before, has enough wit, pace and soul that it makes you want to grab a placard and fight for something you believe in, whatever that may be.