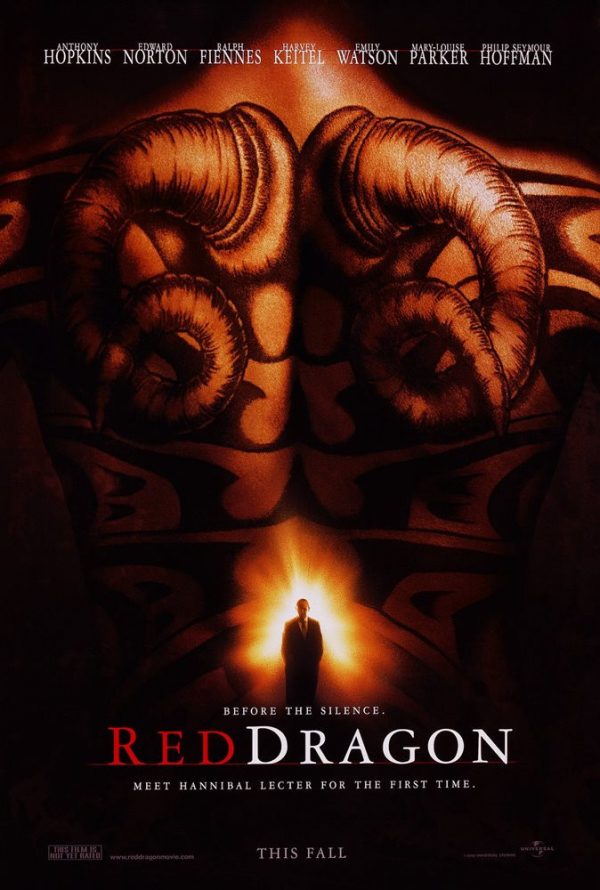 Gifted FBI profiler Will Graham is reluctantly brought out of retirement to help track down an elusive serial killer dubbed “The Tooth Fairy”. To gain an insight into his new prey, Graham seeks the guidance of the last serial killer he chased; Dr Hannibal Lecter. 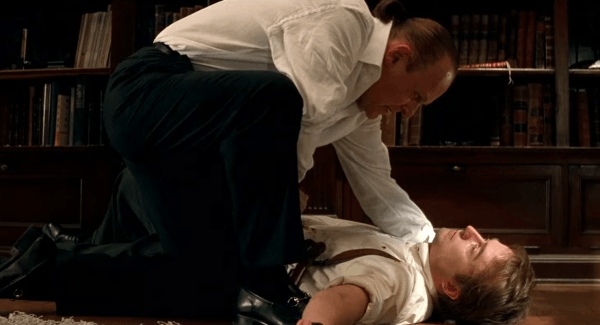 It’s the time of the month where I spotlight a Hannibal film year by year in the vain hope that by the time I reach it they’ll have revived the TV show. Before we get there though we still two more films to get through, so let’s take a look at the penultimate big-screen outing for everyone’s favourite culinary-minded cannibal. This is Red Dragon.

What’s strange about Red Dragon is that I’ve sort of reviewed this film already. Way back in 2016 during my first October Horrors we looked at the awesome Manhunter, which featured the first on-screen appearance of Hannibal Lecter played in that film by Brian Cox. That film, like Dragon, was that was adapted from the first (and at the time only) Hannibal novel entitled Red Dragon. 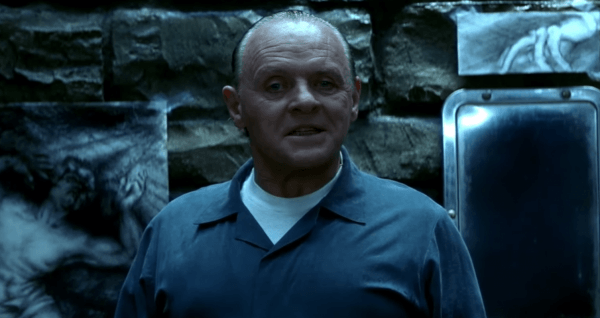 However, while Manhunter and Dragon share the same plot, characters and even some dialogue, it would be unfair to dismiss Red Dragon as merely a remake or some kind of inferior copy. On the contrary, Red Dragon, while not as brilliant as Manhunter, is still an enjoyable close to the Hopkins Lecter trilogy.

Following in the footsteps of Michael Mann, Jonathan Demme and Ridley Scott into the director’s chair this time is Brett Ratner who, while not really leaving quite the same mark as his predecessors, does a competent job.

If anything, Ratner’s direction is very much reminiscent of Demme’s direction of The Silence of the Lambs, with it featuring similarly methodical pacing and somewhat similar visual style. This approach extends to the film’s depiction of violence which, after the overly gory approach taken by Ridley Scott in Hannibal, is much more restrained with the most gruesome sights largely confined to crime scene photos. 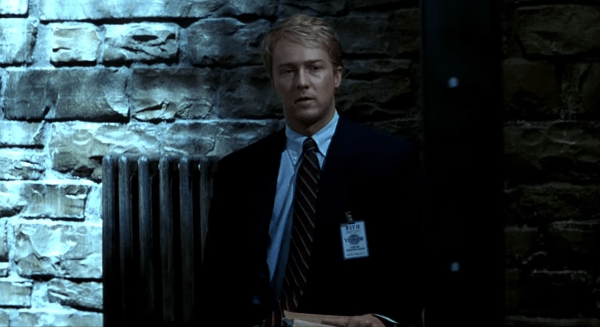 The main issue with Ratner’s direction is that he plays it too safe, borrowing far too much from his predecessors instead of trying to make the film his own. It almost feels like this film could have been directed by Demme and it would have probably turned out the same.

Manhunter focused much of its runtime on FBI profiler Will Graham and his hunt for the “Tooth Fairy”, with the elusive serial killer only making sporadic appearances throughout leaving his motivations and backstory in the dark. It’s an approach that worked well for that film and left the killer as a mysterious and sinister force of nature that killed seemingly without reason.

Red Dragon, on the other hand, follows an approach more akin to Lambs (both have Ted Tally on screenwriting duties) in that while Graham is the focus, we spent more time peering into the twisted mind of the killer he is hunting. It’s a very different and less subtle approach that works both to the film’s benefit and also somewhat against it. 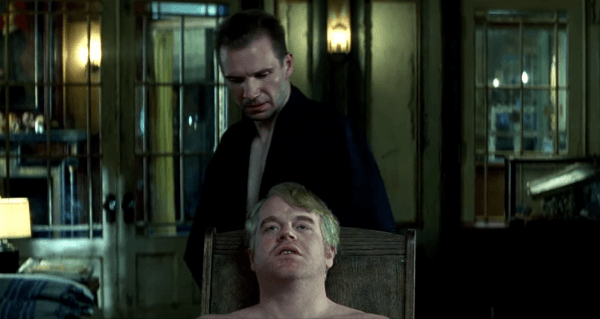 The character of the “Tooth Fairy” aka Francis Dollarhyde (Ralph Fiennes) is a fascinating one. A twisted man who is without question a monstrous killer, his hulking frame and brutal methods making him a truly frightening figure. Yet, despite his evil actions, Dollarhyde is revealed to be a lonely and sad figure, one who we begin to somewhat sympathise with as we see that his actions are the end result of a broken mind battered by a childhood of horrific abuse. However, the fact that enough of his backstory is revealed so that we can feel any kind of sympathy also robs him of that mysterious quality that made him so scary in the first place. In Manhunter, Dollarhyde was scary because we had no idea what had pushed him to start killing, he just did it.

On the acting front, we have the likes of Ralph Fiennes, Emily Watson, Harvey Keitel and Phillip Seymour Hoffman all turning in great performances, with Watson especially deserving the most praise for her sympathetic performance as Reba, a blind co-worker whose kindness and affection almost tames Dollarhydes murderous impulses. 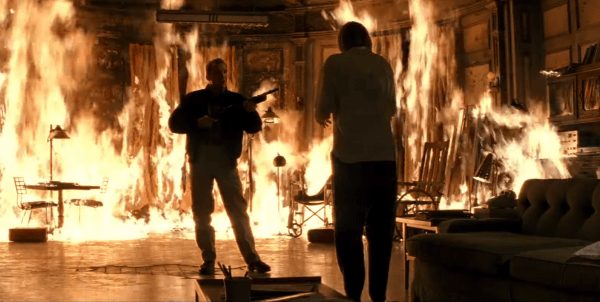 As Will Graham, Edward Norton has something of a disadvantage in that I couldn’t help but compare him to William Petersen in Manhunter. That’s not to say Norton doesn’t deliver a good performance quite the opposite in fact, managing to portray the character in a way that works best for him and in a way that is not a simple retread of what we’ve seen before.

The main issue is that Will Graham is supposed to be a character whose ability to get into killer’s minds has have left him mentally exhausted and teetering close to a mental breakdown, something that Petersen captured brilliantly in his portrayal with his character almost being as twisted as the killers he hunts. Norton, on the other hand, portrays Graham as your standard gifted detective rather than a broken obsessive, with his call back to the field being met with what looks like annoyance more than a genuine fear for his sanity. Again, it’s not a bad performance by any stretch, it’s just that I prefer Petersen. 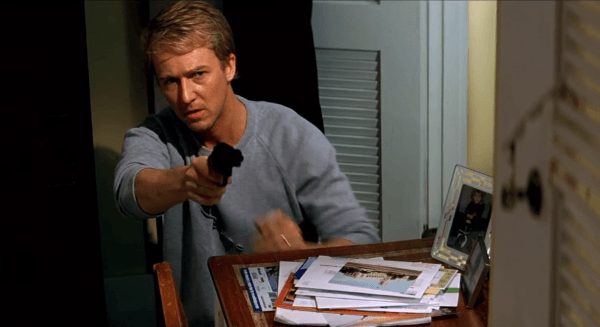 If there is one weak link in this film, funnily enough, it’s with Hannibal Lecter played for the final time by Anthony Hopkins. Hopkins gives easily his weakest performance as Lecter with his distinctive voice and mannerisms being turned up to the point where they are rarely scary and almost veer into self-parody. There are moments where the old magic resurfaces and when Hopkins downplays the character’s evil nature, and in those moments he can be chilling but sadly these moments are far and few between.

While it is stuck in the shadows of its predecessors, solid performances, fine direction, tight pacing and an engaging story, ensure that Red Dragon is still an enjoyable closer the Hopkins Hannibal Lecter trilogy. Check this one out.