The Bird with The Crystal Plumage, 1970. 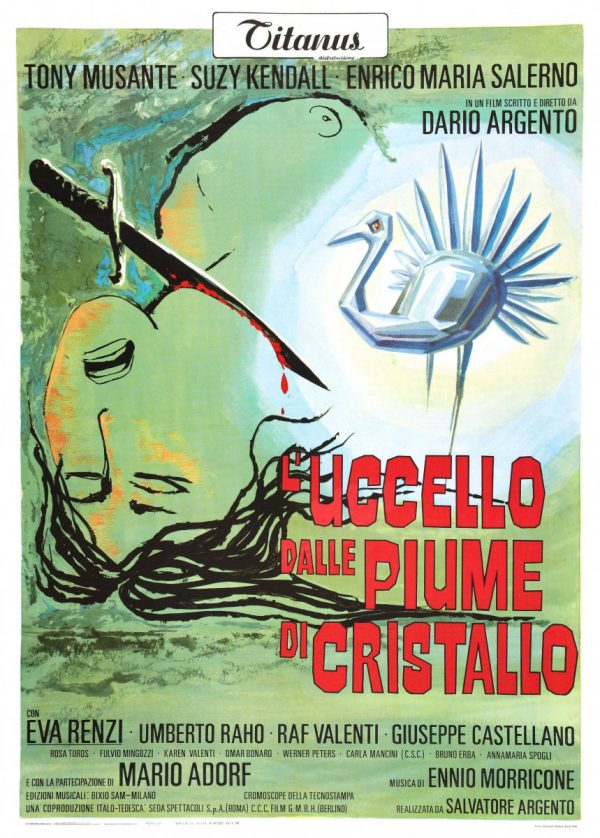 An American writer living in Rome finds himself in a cat mouse game with a brutal serial killer whose latest attack he is the sole witness to.

After enjoying ourselves with Blood and Black Lace last week, its time to take another trip into the distinctly Italian brand of horror known as the Giallo. This time around our guide is famed Italian horror auteur Dario Argento (director of Suspiria) making his directorial debut with the stylish serial killer mystery The Bird with The Crystal Plumage, a film that saw the director burst onto the scene and start his ascent to horror cinema infamy.

As with most Giallo films, Crystal Plumage is a European film with a mostly European cast, so, as always, we’ll not talk about the acting too much due to the abundance of dubbed characters. To their credit though, the dub actors do a decent job with their roles with most of the voices being well suited to the various characters, even if the Italian characters sound a bit like they are seconds away from shouting ‘IT’S A MEEEE!!!!! MAAARIOOO!!!!’.

The plot is your classic Giallo with a mystery involving beautiful women being killed off by an unnecessarily well-dressed leather-gloved killer in a series of increasingly violent yet stylishly shot sequences. Crystal Plumage, in contrast to Blood and Black Lace’s overpowering sense of style, opts more for substance over style as it follows what is essentially a police procedural plot as the authorities go through the various aspects of crime-solving such as blood analysis or trying to discern the killers’ identity by studying his voice through various hi-tech (at least for the early 70s) equipment.

The plot is also full of various twists and turns in which our American protagonist finds himself being chased by the gloved killer one minute and then being shot at by a hitman the next, with the film throwing so twists that you’ll soon find yourself feeling dizzy.

As with most Giallo’s the real fun of the film is channelling your inner Poirot, studying every character and trying work out if they are the killer. Yet again though, I prove myself to utter useless as a sleuth as every time I thought I had it solved I was irritated, but still intrigued, to be proven wrong. When the killer is finally unmasked it does come as a genuine surprise as the Argento throws in one final twist for good measure. Without spoiling too much, the moral of the story is very simple; suspect absolutely everyone and that I am, without question, the world’s worst detective.

While the approach taken by Argento has a tad more substance to it than Blood and Black Lace, that’s not to say that Crystal Plumage is devoid of style. On the contrary, this film has bucket loads of it, boasting some fantastic cinematography work and evocative use of shadows and lights that make the Eternal City seem dark and nasty. A scene in which the killer wrestles with a would-be victim stands out in particular, with the scene being marked out by its bright lighting and use of silence which creates a rather unusual and unique atmosphere. This atmosphere is heightened by how the scene is shot, with much of fight shown from a distance as protagonist Sam watches helplessly as he is trapped behind two large glass doors.

The film’s approach to violence is also noteworthy, with it wisely avoiding overtly gruesome displays of gore in favour giving us a nerve-shredding build-up to a kill, with the murders themselves often being quick mostly off-screen affairs or being shown via a quick splash of blood on the screen.

The film also boasts a very evocative score by composer Ennio Morricone (best known for his Spaghetti Westerns) that is at times rather Jazzy and intense while also being rather relaxing if a little bit ominous. That main theme and the gentle singing of ‘la la’ is rather easy on the ears but you can’t help but feel a little bit anxious when you hear it. A bit like you’re being stalked by a choir.

The main issue with the film though is that by attempting to add more substance to proceedings, it slows the pace down significantly which often leaves the film dragging. The heavy focus on the procedural elements of the police investigation especially slows things down things, with there being far too many scenes devoted to characters discussing the various ways they are trying to hunt down the killer instead of actually hunting him.

While the slow pace, dull protagonist and procedural heavy approach can sometimes slow things to a crawl, the surprising plot twists and Argento’s stylish direction ensure that The Bird with The Crystal Plumage is another worthy entry into a sub-genre that is quickly emerging as one of my favourites. Check this one out if you’re curious.