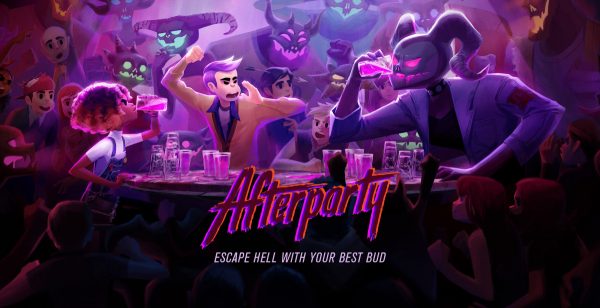 Afterparty revolves around two recently deceased, too-cool-for-school young adults, Milo and Lola, who upon arriving in Hell and understandably deciding they’d rather not stay for an eternity, opt to take advantage of a loophole allowing them to leave if they can defeat Satan in a drinking game.

In order to battle Satan, though, the pair must first gain the seal of approval from two hellish “Monarchs,” who will only grant their permission if aided in carrying out some eccentric tasks. The marooned humans will also periodically face off against Wormhorn, a bizarre dybbuk-like creature who semi-randomly shows up to shame them for their life decisions, functioning as an avatar for Milo and Lola’s own anxieties and insecurities.

Throughout the game, players will switch between Milo and Lola as they visit bars, hang out with weirdos, get drunk, complete set tasks and then move on to the next cycle. The cute hook, however, is that each bar has different alcohol on offer, and depending on which booze you decide to chug, you’ll unlock different, usually outrageous, dialogue options, which can open up further unique conversational permutations. 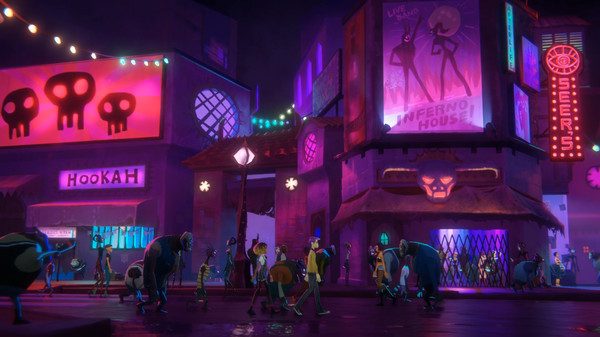 The game’s liquor-soaked chill informs its generally relaxed atmosphere; Afterparty ultimately doesn’t come down to much more than a series of blindingly simple fetch quests, and there’s virtually no difficulty here to speak of.

In my play-through, every seeming fail-state simply led to another branching element of the story, and though the alternate paths seemed fairly straight-forward, there’s probably enough here to merit a second play-through of the mere 4-5-hour play-time. It does have to be said, however, that it’s still this short even with the ability to run wrestled away from the player for most of the game – something a late-game scene actually makes a joke about.

Though Afterparty certainly never bored me, there is an argument to be made that it’s ultimately a little too linear for its own good. Despite having this gigantic world for the player to explore, Hell doesn’t really leave the impression that it’s alive when you’re not in it, and interaction is more limited than many will be hoping for.

Furthermore, the experience is dented slightly by the abundance of glitches and visual issues; you’ll routinely clip through other bodies or objects in the environment, and on a few occasions the next scene simply failed to trigger, requiring a reload. 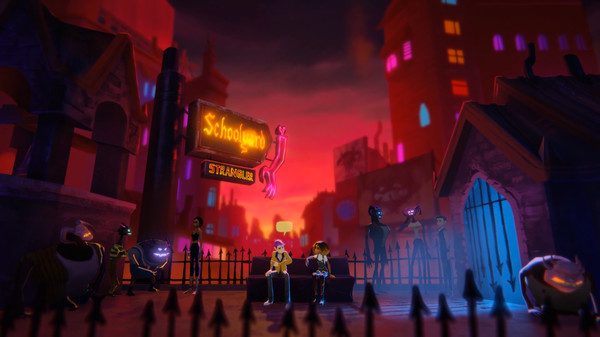 But what this game has going for it above all else is its unique tone; the bleariness of the pub crawl experience is captured with a disturbing verisimilitude, married to plenty of hand-wringing re: mortality and the drudgery of simply doing enough to pay the bills. “Life is Hell” seems to be the message externalised here, with the central locale serving as a not-so-subtle allegory for how soulless and repetitive the average human life on Earth can be.

Afterparty is certainly a more outwardly funny game than Oxenfree, with humour ranging from silly to flat-out boundary-pushing, boldly making not one but two infanticide jokes, both of which actually hit the mark. The comedy style won’t be for everyone – especially the timely-yet-obvious social media lampoons – and some may find the overall vibe a little too smugly self-satisfied. But no matter the broadness of Night School’s target, they sure as hell hit it hard.

The game’s distinct mood allows for some uncommonly trenchant world-building, creating a Hell that, immersed so fully in urban sprawl, feels completely different to most typical pop-culture conceptions of the Great South. And yet, the many giddy pop-culture references on offer, with the likes of Friday the 13th, Hellraiser and even Blade Runner freely invoked, surprisingly don’t feel at all out of place.

Visually, the game is a sure step-up from Oxenfree, that title’s comparatively muted palette swapped out for a richly neon-drenched cityscape. And though the lighting and character models still feel a touch too elementary to truly dazzle, the sheer wealth of detail transpiring in the frame at any one time is truly remarkable for a game produced under clear budgetary constraints. 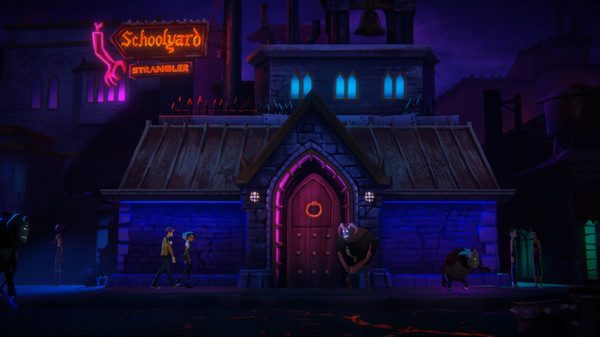 But in many ways the aesthetics are outdone by the fantastic sound work, particularly the voice acting. Janina Gavankar and Khoi Dao are terrific as Lola and Milo respectively, though it’s arguably Ashley Burch and Dave Fennoy who steal the show as sepulchral taxi driver Sam and Satan respectively. Fennoy’s impossibly velvety vocal register is a perfect choice for the Devil himself, nimbly cementing his seductive charm and also his hidden vulnerability.

More surprising is just how much effort has been put into creating an ambient soundscape comprised of countless minor voice roles, which when mixed together in the environment of a bar, aptly capture the atmosphere of a night out on the town. There’s no mute, text-only dialogue here to mention, and it’s a great choice, even if the overlapping dialogue does occasionally bottleneck into the front-end of the sound mix.

Afterparty didn’t keep me on my toes in the same way that Oxenfree did, a game where I was constantly unsettled by having no idea where the tone would go, while Afterparty is, perhaps disappointingly, far more upfront about what it is from the outset. There’s no major modal turn throughout the game, even if it nevertheless resolves with a genuinely unexpected final rug-pull that’s likely to leave players smirking, regardless of exactly how their playthrough concludes (yes, there are multiple endings).

Though the central gameplay cycle is a tad too repetitive – a fact the game tries to lampshade through some tongue-in-cheek dialogue – the experience is over before ennui can dare to set in. For what entertainment it offers over its short length and for its small price, it’s certainly a worthwhile successor to Night School’s debut, if hardly the leap to a higher echelon some may be hoping for. Play with a drink (or two) to hand if you really want to get in the mood. 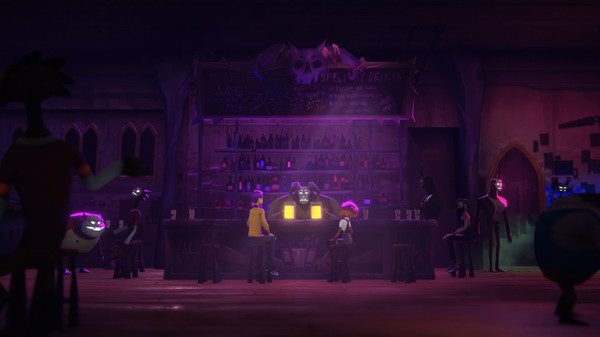