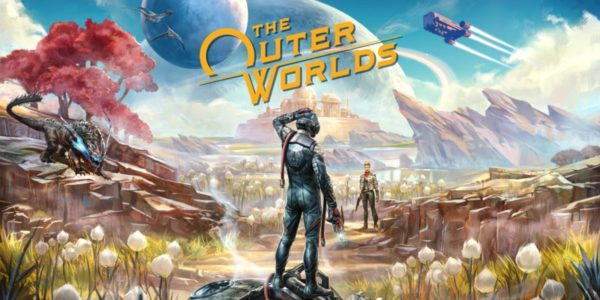 The Outer Worlds is the latest adventure from Obsidian Entertainment, who will be fondly remembered for their work on Fallout: New Vegas. This latest adventure from the studio is straight out of the Fallout playbook with an RPG Adventure that takes players on a journey across space, strange worlds and even stranger people.

This current gen has not been the greatest for multi-platform RPG adventures, DO NOT MISTAKE ME, there have been amazing titles – just not as many as there could have been. With titles like Fallout 4 failing to live up to a lot of people’s expectations and no new Elder Scrolls games this generation, there has been a serious void in adventure games with a certain formula, that is until I saw the trailer for The Outer Worlds. This comes from the studio that made arguably the greatest modern Fallout title,  which managed to break through and bring its own RPG adventure that looks to have many of the staples of the Fallout franchise. The reason it gets compared to Fallout so much will be down to the studio’s involvement in the franchise and also the involvement of the original Fallout developers (pre-Bethesda). 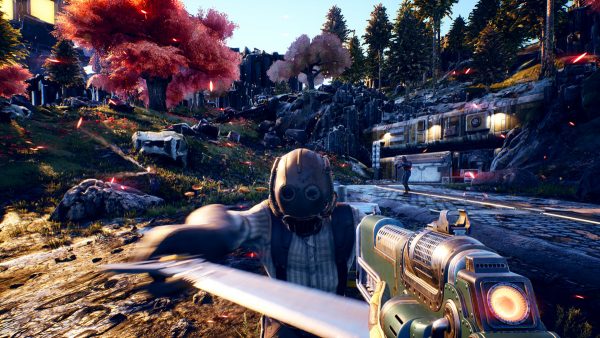 The basic story of the game is that humanity took to the stars to occupy new worlds at the funding of corporations instead of government. Our character was part of a ship crew on the “Hope”, which was filled with the brightest and best of the explorers. When the Hope malfunctioned, it was left to drift in space thinking the crew was lost.

70 years later you are rescued by a mad scientist who believes you and the rest of your crew need to be brought out of stasis to bring order to a new galaxy that humanity has corrupted with its greed. This is the basic premise of the game; you are sent out to help the man who brought you back from death essentially and try to bring all the corporations back into line.

Throughout the new solar system, you must create allies and enemies of the corporations to gain support for your overall goal. This is a mechanic that Obsidian introduced to Fallout: New Vegas and have definitely fine-tuned for this experience. 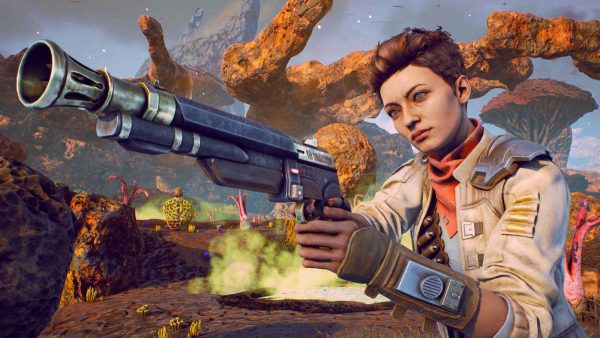 The game is a basic “Bethesda-style RPG” title, and by that I mean first person action with a levelling system breaking down the character’s development into specific skills. The combat is both melee and ranged weaponry, allowing for different approaches to combat as the game, as well as to progress and develop your character.

Obsidian have taken everything they learned from all previous works into developing this extremely well fleshed out universe. The landscape feels lived in, developed and oppressed by the realities of the game world, meaning the player has a great range of worlds to explore with fresh eyes in a brand-new Intellectual Property.

The opening hour or two are certainly the weakest I found when I booted up the game; for some reason it felt extremely by the numbers and had me extremely worried. After the initial tutorial section was over, where the player receives their own ship, the game moves into venturing out into the worlds and creating the adventure; this is where the game changed and all my fears dissipated there and then. 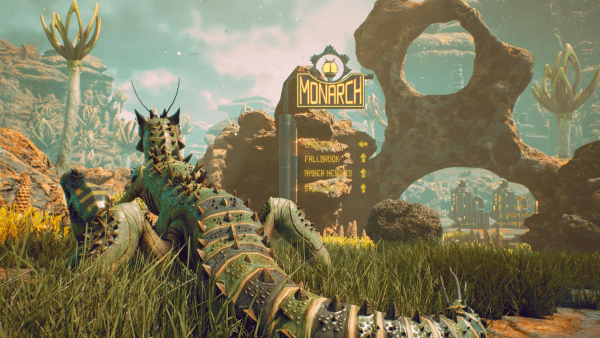 The combat may have felt basic to begin with, but slapping on a weapon mod and creating a weapon to suit me felt better. It reminded me of some of the more adventurous weapons found in other titles that make eliminating enemies so much fun. Though I would recommend more experience players of RPG titles to start the game in “hard difficulty” as I found normal to be extremely easy and a bit of a breeze when encountering new worlds with my posse. Though also limiting the number of companions you take with you at one time will have an impact on combat experiences.

The game’s exploration is certainly one of the more refreshing aspects, where the beige and brown wastelands have been replaced with new and alien worlds. The skyboxes are extremely impressive with unfamiliar skylines and giant planets looming over the landscapes in game. Running through the flora and fauna of new worlds and just appreciating the passion project of the studio making something for the fans, rather than telling the fans what they should want.

There are companions that can be found rather early on in the game, though I was absolutely delighted to find out that two companions can join the player at a time when exploring. Not only do these companions help out in combat, but they also loan players buffs to certain skills such as persuasion, hacking, intimidation and so many others. The later abilities where players can increase their carry limit with each companion following you at any time. All without needing to swap items between characters via menus. 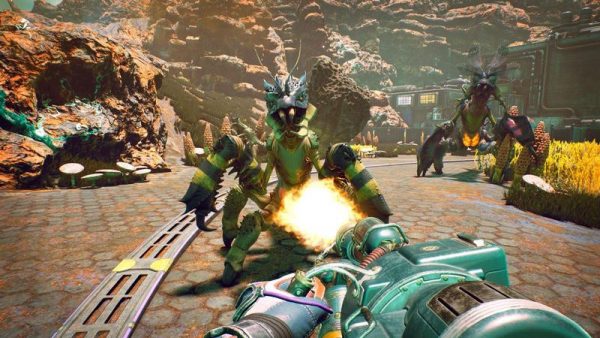 These are fresh new mechanics being introduced into a formula and are wonderfully simplistic, so it is hard to see why these things have not been introduced before now to titles such as Mass Effect where multiple companions are brought with the leader at a time.

The game does allow for perks to be grafted to a player when certain level ups take place. The perks are split over 3 different tiers which unlock once a specific number of perks have been put into that tier. These perks allow the player to do a number of things, such as; increase carry limit, buff base armour level, fast travel while encumbered and so many other things.

Companions also receive perk points for every 5 of the main characters level up’s, but with a much more stripped-down perk tree.  These can be drawing aggro from incoming enemies, increasing critical shot damage or even buffing the main characters skills even further. 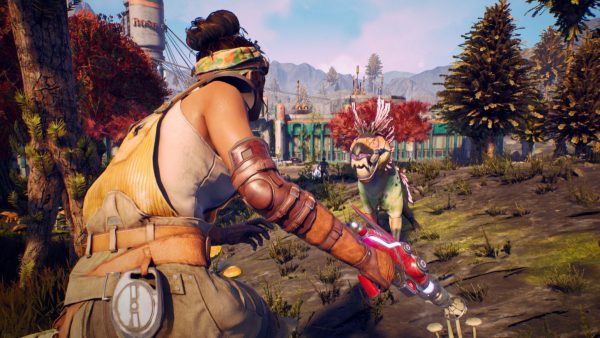 While this is all by the numbers, during the game players will be given the choice to accept a flaw, meaning you will gain disadvantage against specific foes or on certain terrain. Now I can imagine a lot of people wondering why the hell someone would choose to take a disadvantage, the easy answer is the game will give you a free perk point for accepting this flaw. This mechanic made me think, only to decide that I loved this idea; where the player can then create the difficulty spike for their playthrough. Tailoring this RPG experience even further to your own play style, creating something different and refreshing.

The music is a wonderful ambient experience that compliments the players adventure across the alien tundra of The Outer Worlds. The composition within the game is not out to draw focus, but instead to reinforce and enhance the players journey.

Throughout the game though, the voice acting and character animation for conversations is a cut-away transition to when someone speaks, rather then experiencing the full adventure from the player’s own eyes. 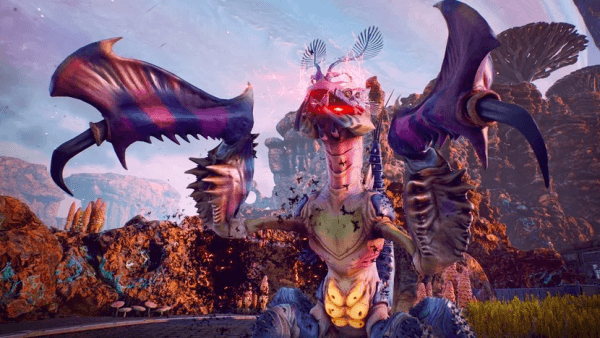 The conversation had with characters and crew mates have an extremely intimate feel to them. While any companion can be dismissed from the crew at any given time in the game, the more you talk to them and help them, the greater the connection you feel to these people. This is something I have not found since the Mass Effect titles, where the journey you take with a character ends up being a rewarding piece of storytelling for the play character as well.

The Outer Worlds is a great achievement for Obsidian Entertainment; where the gaming world may have been experiencing a void, they have stepped in and delivered a wonderfully beautiful experience. The journey that put a smile on my face for the majority of the playthrough was never a slog. The hours upon hours spent exploring new worlds and building relationships and alliances with factions; getting lost on side quests and being absorbed away from the games main story, it is a wonder experience.

This game exceeds where others fail, only due to the passion of the team developing this title. This game was obviously created by fans of these types of games, where the narrative and the action work hand in hand to deliver the player into new and creative worlds full of imagination, carnage and quirky humour.