With November just round the corner Microsoft has revealed the coming month’s Games with Gold.  November will bring action and adventure, sci-fi action, and racing to Xbox gamers. 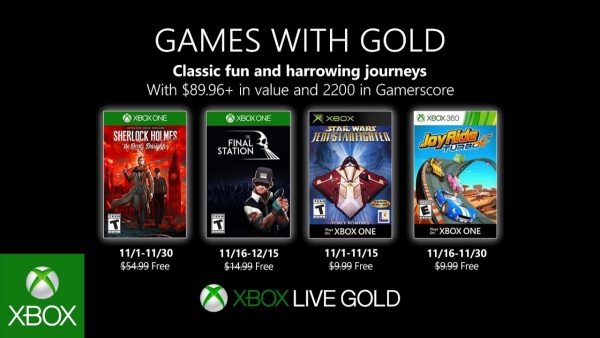 Sherlock Holmes: The Devil’s Daughter by Frogware and Bigben Interactive kicks off November’s free games with a bit of mystery solving.  As with the game’s predecessor, Sherlock Holmes: Crimes & Punishments, players will explore crime scenes and examine clues which will then be added to a “deduction board”.  Success or failure will be determined by the clues found and how they are interpreted.

Also for the Xbox One from 16th November is The Final Station from Do My Best Games and publisher tinyBuild.  This is a single player side-scrolling shoot-’em-up combining elements of train simulation and exploration.  Players will need to feed and heal survivors that they have rescued and then take part in combat every time the train arrives at a railway station.

Thanks to backwards compatibility, the 2002 hit title Star Wars: Jedi Starfighter will bring nostalgic fighting among the stars.  By taking on a variety of missions ranging from escorting to straight out fights players will be able to strike a blow for the Jedi forces.

Finally, to see out the month, Xbox 360 players can get their hands on the kart racing gem, Joy Ride Turbo.  Players will be able to take their avatar around each of the game’s tracks in one of 42 vehicles and use a variety of power-ups to get past the eight competitors and take first place.