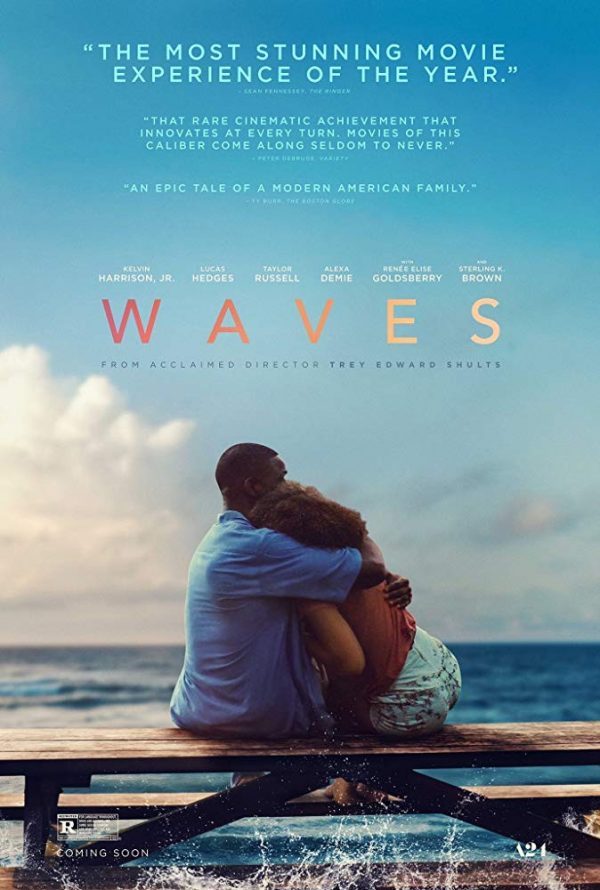 Traces the journey of a suburban African-American family – led by a well-intentioned but domineering father – as they navigate love, forgiveness, and coming together in the aftermath of a loss. Writer/director Trey Edward Shults trusts his vision, even if it means subjecting his viewers to a stylistic blitz of relentlessly distressing events that nearly threaten to make one walk away. Of course, as unsettling as it is, it’s also an easy decision stick with Waves, a domestic drama that balances its downward spiral into tragedy with an optimistic struggle to maintain a family’s unity. Pain is either going to bring this suburban family back together closer than ever or cause them to crumble into nothingness. It’s as uplifting as it is an uncomfortably intimate and non-judgmental look at a self-destructive breakdown.

Clearly, Trey Edward Shults deserves immense credit for not only his remarkable craftsmanship but his confidence that moviegoers will question where the loose narrative is headed instead of quitting terrorized, as does the outstanding cast that successfully elicits nearly every emotion imaginable. What really ties the film together (and is absolutely deserving of an Oscar nomination), though, is the score from Trent Reznor and Atticus Ross, the former of which whom fronted his own legendary electronic rock band Nine Inch Nails that thrived with a mixture of aggressively unhinged tunes and soft, poetic lyricism. Once again collaborating, what they bring to Waves is reminiscent of their past cinematic efforts (The Social Network) whereas Trent Reznor seems to be tapping back into the kind of haunting thrashing that informed his output during the darker times of his life, fitting the ruinous rage and anger progressively emanating from Kelvin Harrison Jr.’s Tyler. 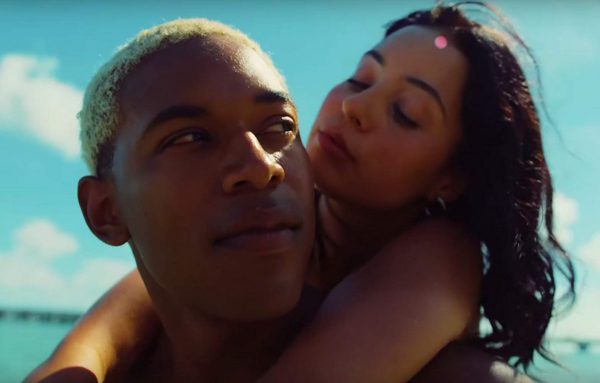 An atrocity is committed during Waves, but not without an invitation into Tyler’s unstable psyche, which is the result of his father (Sterling K. Brown) pushing him beyond his limits physically for a prospering, college-bound amateur wrestling career. If you saw and thought Kelvin Harrison Jr. exerted the hell out of himself throughout the entirety of Luce, Waves offers up something more unforgiving and more taxing (complete with frenetic cinematography to provide immersion). And if you thought he was Oscar-worthy for Luce, you’re going to want to give him a damn Oscar right now for Waves. Praise aside, the film uses that physical and mental pressure to touch on the toxicity that such an environment, well-meaning or not, can cultivate. The character might not deserve empathy for what inevitably happens, but it’s profoundly there as the story is more concerned with inciting us to understand rather than demonize. Waves navigates tricky waters (no pun intended), with even the smallest details such as the race and age of its characters adding on great importance to how the material is processed.

Taylor Russell plays Emily, the sister to Tyler, who perhaps suffers the most out of anyone within the family from her brother’s hostile actions. Again, much of Waves is a devastating journey with glimmers of hope regarding this family being torn apart. She has a boyfriend in her corner played by Lucas Hedges, and while he is a terrific presence as always, there is the sensation that the film might be slightly more emotional and moving if Emily is allowed to move on by herself and on her own terms rather than situations stemming from what is, admittedly, an awkward and endearing romance. Not to mention, her brief scenes with Sterling K. Brown are richer considering they are expanding on the state of the family at large. Likewise, the scenes with her brother also add layers to him as a flawed human being. Then again, there is a juxtaposition between all of the film’s relationships (the parents, Emily and her boyfriend, Tyler and his girlfriend) highlighting the ways we support one another, or in the case of Tyler, his inability to keep his cool and love for one another afloat when complications arise. Without love, the seemingly impossible cannot be toppled. If one lets fear take over, that fear will quickly set one on the path to unreasonable hatred that brings forth more pain for all parties.

As mentioned, Waves is aggressive in style; the camera pivots in circles from the inside of moving vehicles, the aspect ratio changes over time to illustrate the claustrophobic nature of metaphorical walls closing in on its characters (and widening again whenever there is release), there are multiple indie rock songs that will vary in mileage for everyone, and locales such as beaches that are photographed with visual beauty. Creatively, Trey Edward Shults uses the same bag of tricks for Tyler and Emily to convey different meanings. It’s also short on subtlety, with explosive acting (absolutely fine) and some smaller moments that could benefit from not having such intensity (there’s a scene in front of an abortion clinic that certainly feels real, but is also boisterous and so in-your-face that it takes away from a more important element). The case could be made that Waves is occasionally over-directed, but that visceral approach is also a fraction of why it’s impossible not to remain on edge for its 2+ hour running time.

Where Waves ends up is ultimately satisfying and cathartic; more than anything it’s a film about love and hate. Specifically speaking, it’s about the negativity of harboring hatred and how it can poison the soul. It doesn’t just stop there; the themes dig far deeper with an emphasis on family members finding empathy for one another, despite how monstrous and hurtful the sins are. Waves is substantially challenging in various ways with no easy answers; it’s scintillating filmmaking that is designed to shatter your heart and then stitch it back together. And whatever mark it leaves will forever be imprinted on your heart.