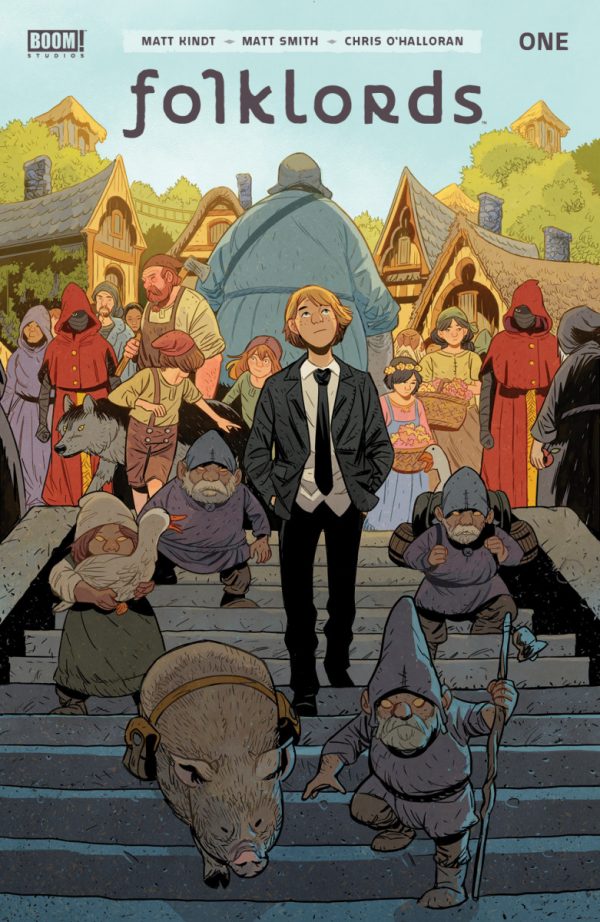 The first issues of Folklords is a wonderfully crafted tale where our leading man is still a boy finding his place in the world. The quest for answers will take a misfit and his questions to new locations, hopefully giving him the knowledge that he seeks.

The issue opens with Ansel displaying his routine of dressing in a suit, setting his watch and grabbing a curry goat pie…. Only to then emerge into a world of a Fantasy Kingdom. The boy is automatically out of place and draws the attention of all the passers by in peasant garbs, knightly armour and wizarding robes. Welcome to the fantasy world of Folklords.

The issue is set up about the coming of age of a group of children who will have to declare their quests before graduating to adulthood and finding mundane jobs. When one character announced his task as consuming mermaid flesh to gain immortality, nobody bats an eyelid; yet when the mysterious titular Folklords are mentioned … that is apparently too absurd. This is where the reader finds out that these lords could potentially help Ansel find our world that he dreams of – the reason behind his entire persona.

It is difficult not to highlight how wonderful and impressive this story is, with its very vibrant colours and abstract colour scheme to emphasise that we are not in Kansas anymore. The setting of the medieval-esque village is familiar to many from reading fantasy books or playing games. The scene in the treehouse is a wonderful story that draws memories of Ewok villages and childhood angst, where the mortality of growing up is finding your place.

The first issues actually managed to create an absurd amount of world building in 27 pages that some modern video games struggles to achieve in 27 hours. The world is pretty established within the grounds of the village with the characters of a Librarians embedded as the overall authority.

The issue was an absolute delight, so much so that I re-read it straight away to start admiring the artwork and background details I may have glossed over on first reading. The biggest disappointment now is waiting weeks until the next issue hits shelves.