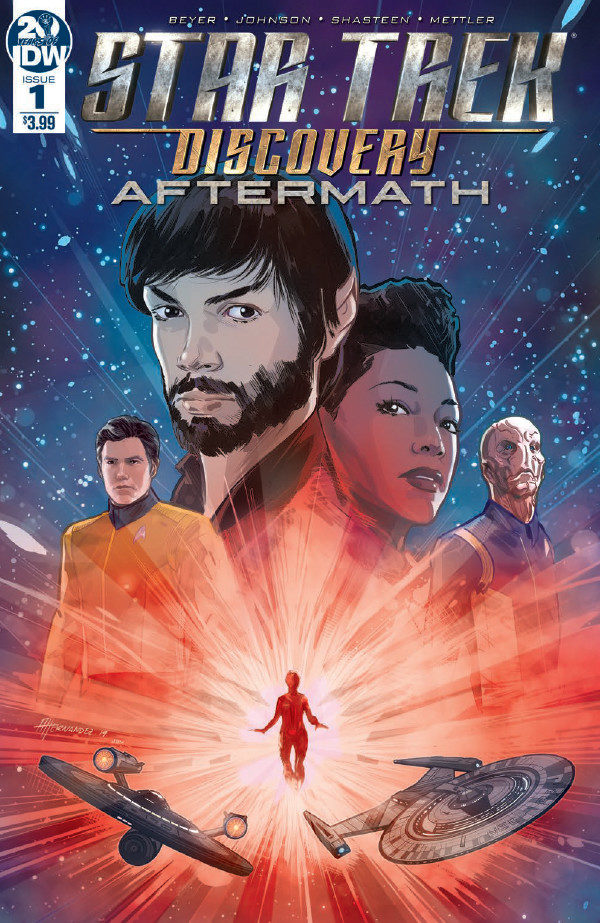 With Discovery now some nine hundred centuries in the future, its name conveniently erased from all Starfleet and Federation records, life clearly has to go on for those that have been left behind.  With bread being broken between the Klingons and Starfleet, across the strewn remains of Section 31 and Control, it appears a very fragile peace is now on the cards for the previously warring races.  Though whether all Houses within the Empire will appreciate this is another matter completely, but the Mother of the Empire certainly seems to be warming to Pike’s advances of a more stable Quadrant.

Meanwhile on Vulcan our Green-Blooded Science Officer is lost in thought, as his half-sister has left him forever.  Now he grows to miss her, his thoughts wander to their past and the wake the Red Angel has left behind.

Aftermath from Kirsten Beyer & Mike Johnson is set come the close of Star Trek Discovery Season 2 and is mashed into the timeline of events right before we see a clean shaven Spock on the Bridge of the Enterprise.  What may have seemed like a brief instant to us in TV land and a trip to the Bolian Barbers for Spock, now seems to be a three-part special story as we deal with the falling out of Klingon Houses, Peace between both Starfleet and the Klingon Empire, and Spock missing his previously estranged sister.  That was one bushy beard that Spock had to get trimmed it seems!

Don’t get me wrong, I am one of those “Pike’s Enterprise Series” Flag carrying fools.  After watching Discovery Season 2, I wanted more of the Pike & Company years, but what I honestly don’t feel we need is a quick fix, gap filler.  This is only the first part of three and already I feel that this series could have easily arrived after we saw the actual events on screen.

One other bugbear here and those that have read my Star Trek comic reviews will know that Tony Shasteen’s art can either be fantastic, or in the case here with Aftermath not so fantastic.  On occasion panels look great, but then faces skew or objects seem to look out of place and it disrupts to flow of the comic.  Again, I’ve read other comics and loved Tony’s work, his delivery of ships and his covers can never be faulted, but here in Aftermath I’m not a fan.

However, to take one big positive away, if you’re lucky enough to pick up the variant cover from George Caltsoudas this month then you’ve certainly got something nice to look at.  I’d honestly love to see this as a large poster it’s that good. 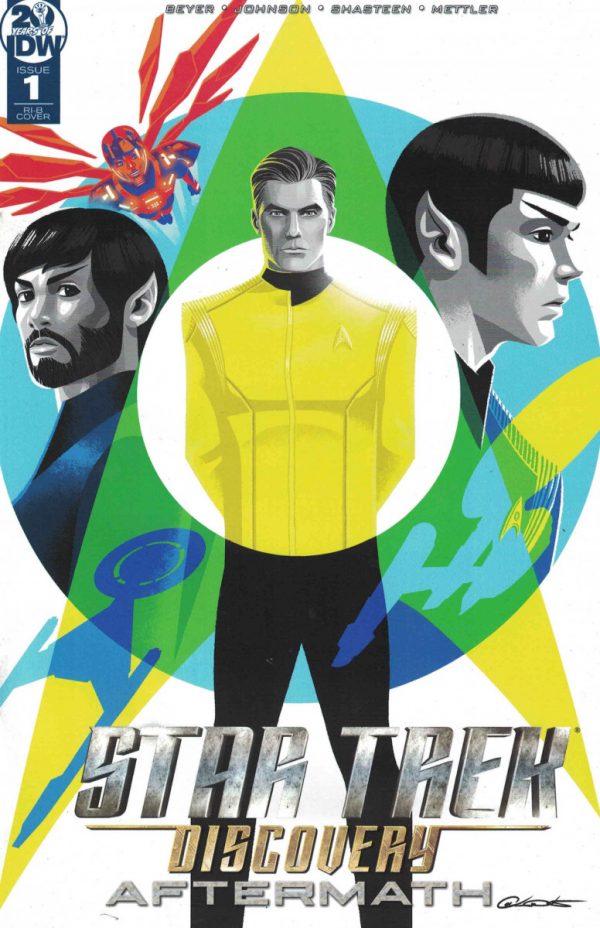 My fingers are crossed that Star Trek: Discovery – Aftermath picks up in the next two coming issues.  Though I still feel that both Beyer & Johnson cramming this in before Spock went beardless, seems – to me – somewhat wasted for a Pike & Co Enterprise comic book special.