In the D23 trailer for Star Wars: The Rise of Skywalker, fans were shocked to witness Rey wearing dark robes and holding a double-bladed red lightsaber. Now, Daisy Ridley has opened up about Dark Rey, how much she enjoyed playing the role and how the scene moved herself and the rest of the crew. 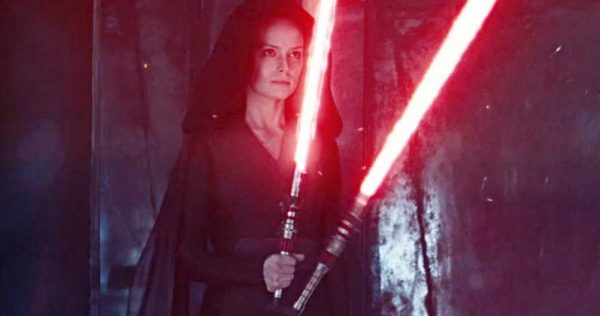 “It’s fun to play someone’s best version, and then the worst,” Daisy Ridley told Adoro Cinema (via ComicBook). “It’s an amazing thing to do as an actress, but we can’t do it often. … I felt very good. That’s the most I can say, unfortunately.”

“There was a scene that touched me a lot,” Ridley continued. “It was our last day shooting in Jordan and the natural light was fading. And it was so exciting. It was just a short scene, we filmed very fast, but the crew was shaken in a way I had not seen before. And I thought, ‘My God, if this is people’s immediate reaction when the scene isn’t even ready, imagine what it will be like to see it in the movies, with the John Williams soundtrack and all that.’”

Are you excited to see Dark Rey and her double-bladed lightsaber? Are you looking forward to Star Wars: The Rise of Skywalker? Let us know in the comments below or tweet us @flickeringmyth…