With top-shelf rhythm game franchises like Guitar Hero and Rock Band sputtering to a halt as of late, the genre has found a most unexpected niche in the virtual reality realm.

Recent hit titles such as Beat Saber and BOXVR have re-conceptualised the traditional rhythm game in creative – and sweaty! – ways, and while developer Kinemotik Studios’ new Early Access game Audio Trip still has a way to go before it can hang with these genre kings, this first pass is still a promising indication of what the full product may offer.

Audio Trip is a VR dance game in which the player’s controllers are represented as neon-tinged boxes in the game world – one purple, the other orange – with the aim being to touch the corresponding coloured notes with the respective hand, by any means necessary.

Beyond that, you’ll also have to smash certain arrowed icons in the desired direction, hit drums, dodge cage-like barriers, and even wave your hands along rail-like lines of colour.

If that all sounds simple enough, perhaps the biggest note of caution going into Audio Trip is that this game is unexpectedly challenging from almost minute one. A piecemeal tutorial walks players through the basics, after which they’re free to explore a selection of 10 tracks with three difficulty settings each (Beginner, Regular, and Expert). 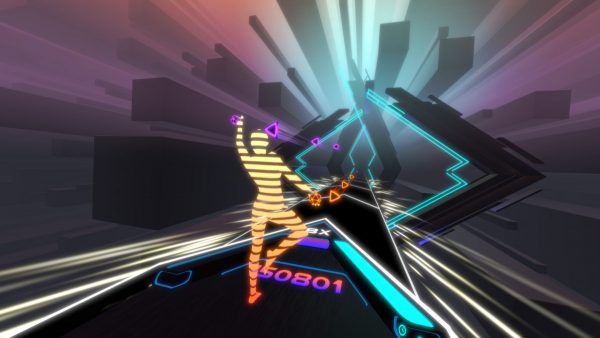 Even on Beginner difficulty, this thing is no picnic, and it took several hours of play before I felt fully acclimated to the game’s tricksy colour-coded mechanics and precise hit-boxes. The conditions for failure are surprisingly unforgiving even on the lowest difficulty, and it doesn’t take more than a few successive misses to trigger a Game Over.

Given that the game’s primary goal is to have players lithely dancing around their room, it’s a shame that the precision required to hit some far-flung notes encourages the player to dance rather stiffly at times.

Mercifully you can turn Game Overs off in the menu and go full ham, though you’ll sadly also deny yourself a score by doing so. There are meanwhile abridged versions of all the songs available, a not insignificant mercy given that several of the tracks clock in at around six or seven minutes a-piece.

Regular and Expert difficulties, meanwhile, are genuinely punishing for most songs, hurling extremely busy note highways at the player while constantly switching up the colour placement for maximum trickery.

Though the game does by default present a choreographer who carries out your desired movements a beat ahead, this figure is so faint and therefore so easily lost in the shuffle of the on-screen chaos that I didn’t find her much help. 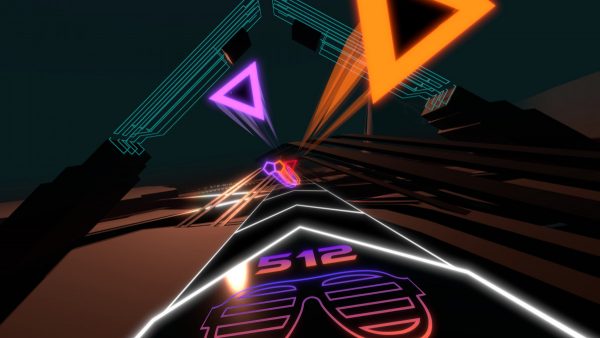 Thankfully the core gameplay loop is enjoyable enough that I found myself persevering through the difficulty rather than succumbing to it. I won’t be beating the songs on Expert any time soon, but when you slink into that tunnel vision mode and beast through a track, it is a genuinely joyous and satisfying experience.

Even accepting this as an Early Access title, though, the songlist is rather on the svelte side, with the mere 10 tracks on offer totalling only around 50 minutes of music. Still, while hardly a particularly eclectic bunch, the fully licensed songs – from the likes of Skrillex and Deadmau5 – all boast a pulsing, appealing energy, while Lady Gaga’s “Just Dance” proves probably the most accessibly entertaining routine. The final release will reportedly launch with 20 tracks, but wait and see on that.

Aesthetically, Audio Trip doesn’t set the world alight for VR rhythm games, but it’s certainly an attractive outing regardless. The note chart and surrounding, Tron-esque environments boast an impressive level of polish even if it’s not always easy to soak in and fully appreciate how “alive” they are, given the focus required to get through a song unscathed. But for an Early Access game, the graphics don’t seem to need much tweaking whatsoever, and the menus are functionally to-the-point.

As for what else extra the final release could do with, apart from double the tracklist? Kinemotik is reportedly working on adding online leaderboards, online multiplayer and also a choreographer mode where players can create their own routines, all of which should make this a more appealing value proposition. In terms of core mechanics, an easier difficulty setting also wouldn’t go amiss, as well as the addition of sound effects for hit notes, as is basically expected from any quality rhythm game these days.

Audio Trip is slightly rough around the edges, but nevertheless an addictive and deeply physical entry into a crowded genre. Whether you just want to get your groove on or actually use it to shift some weight, the core gameplay is loaded with promise. If Kinemotik can ramp things up sufficiently for the full release, this could be something special indeed.