DOOM Eternal is now mere months away and as 2020 rolls towards us, we’re starting to feel sorry for the upcoming new year, for it doesn’t know yet that it will have to contain thousands of demons from Hell!  The sequel to 2016’s award-winning DOOM, DOOM Eternal from Bethesda is one of the most anticipated games of this upcoming year and below, we’ve got news on some of the latest additions to this brutal FPS. 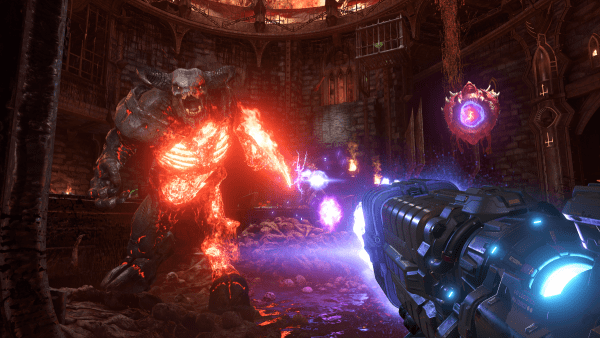 To add further fuel to the excitement, DOOM Eternal will feature several brand-new game modes for yet more guts and glory, where gamers can take on the role of a demon, either alongside or against friends. There’s even an option to surprise friends in each other’s campaigns as demons – giving you the opportunity to serve up your own special blend of Hell. Or, if you’d prefer, you can work together in the amazing BATTLEMODE, taking on a fully-armed DOOM Slayer in the ultimate role reversal!

Take on the role of the fear-inducing DOOM Slayer, who has returned to find that Earth has suffered a demonic invasion of epic proportions. Equipped with an advanced Praetor Suit; featuring a shoulder-mounted flamethrower and a retractable wrist-mounted DOOM Blade, the Slayer is faster, stronger and more versatile than ever before.

In a desperate bid to survive, you’ll be faced with an array of vicious demons, battling a combination of returning favourites as well as new species exclusive for DOOM Eternal. Each armed with their own unique attacks, you’ll be kept on your toes as you battle your way through picking up resources including health, armour and ammo to live.

For more information and to pre-order DOOM Eternal visit their website here.  DOOM Eternal is set to launch in March 2020 on PS4, Xbox One, and PC.