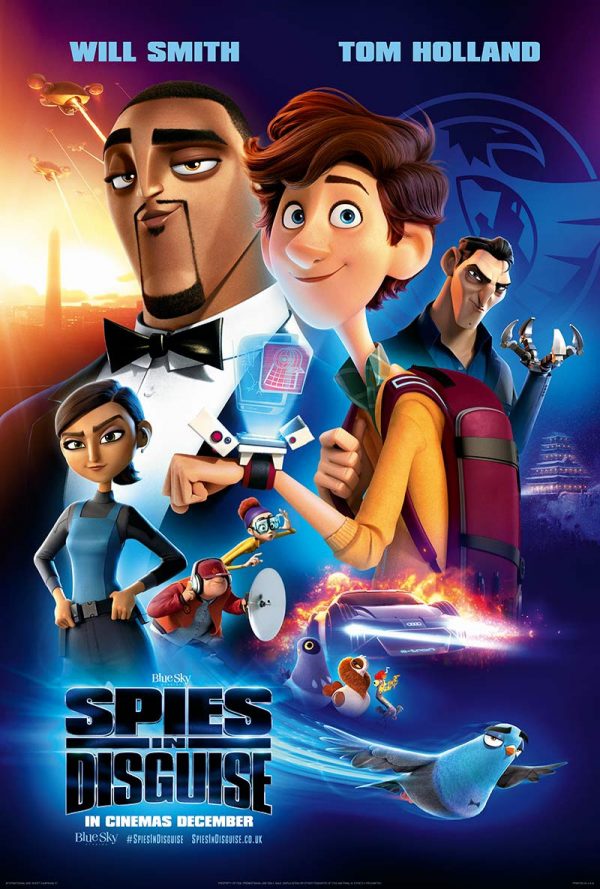 When the world’s best spy is turned into a pigeon, he must rely on his nerdy tech officer to save the world. 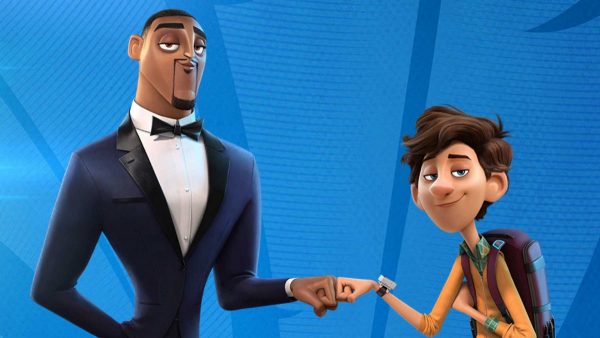 Tom Holland is a smart choice for casting voiceover animation, as he instills every project given to him with the amount of energy and fun radiating from his interpretation of Spider-Man (I’ve met the guy, and he somehow was chipper at the end of a 6+ hour day posing and signing autographs for fans). Placing him alongside someone as charismatic as Will Smith is equally wise, somewhat rendering Spies in Disguise curious enough to check out based on talent alone. I’m also pleased to report that they do have chemistry with one another, pinging off of the hyperactivity emanating from one another with more than enough quirky dialogue and one-liners to maintain a moderate amount of attention for kids and adults alike.

Unfortunately, Spies in Disguise is also another animated feature hammering home the importance of being yourself, a message that has grown beyond tired for recent family movies. Certainly, there is an abundance of alternate themes to bring children (and even adults). With that said, the espionage cartoon additionally has some commentary on the cyclical nature of destruction and never-ending pain that comes from fighting fire with fire, or in this case, nefarious villainous masterminds with firepower and gadgets meant to do harm right back. The narrative is also not afraid to dip its toes into the idea that even the bad guy has justified reasons for his actions, which would have been far more interesting if it was both explored more and if the antagonist was actually memorable. 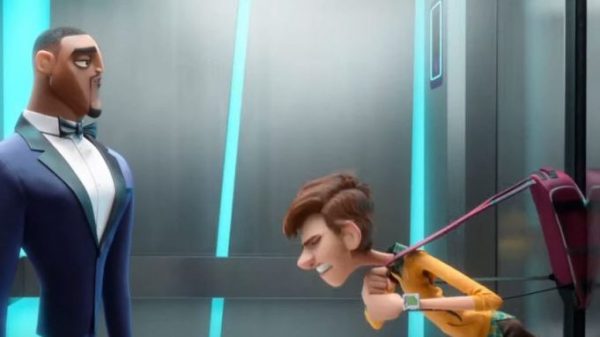 The only notable thing is that he is voiced by Ben Mendelsohn and has a robot hand, alongside some devices of his own that allows him to take on the identity of Will Smith’s international spy Lance Sterling, framing him for a number of treasonous crimes. As for Lance, he’s like a cross between the actual Will Smith and Tom Cruise’s Ethan Hunt with a dash of James Bond suave. When considering the massive ego Will Smith once had and the character on display here (a gung-ho solo flying agent against the notion of teamwork and a bit too in love with himself), it’s another layer on top of the already terrific casting. It’s also worth pointing out that Will Smith only gets funnier once he is inadvertently turned into a pigeon and has his patience tested waiting for an antidote to finish brewing, all while he struggles to adjust to his new shape, size, and form. Every once in a while, the broad humor pays off even if there’s nothing riotously hilarious here.

Meanwhile, Tom Holland plays Walter, a socially awkward inventor that firmly believes in creating devices that serve a purpose without causing any physical damage. One such bizarre but frequently entertaining gadget is the deployment of kitty glitter that subsequently displays an image of cats in the air that injects a dosage of serotonin into anyone looking in the general direction, temporarily immobilizing them. Basically, cats are adorable and there is no choice but to surrender to their cuteness. As fate brings him joining forces with Lance (despite being fired over his ridiculous ideas), they lightly banter regarding proper ethics and morals to saving the world. 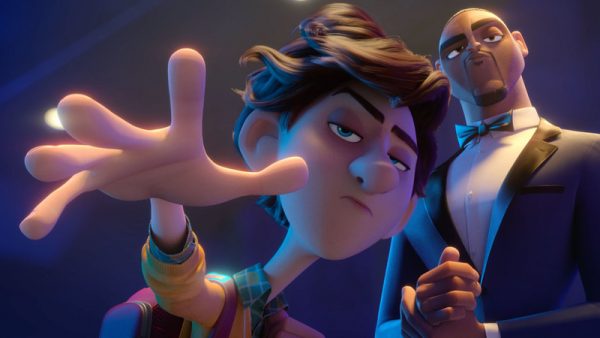 Again, this would be more intriguing if Spies in Disguise was willing to further explore the central themes inside of its narrative. Instead, there is an alarming amount of gags involving bodily bird fluids and anatomical terms of pigeons. It also doesn’t help that the numerous action sequences are incoherently sped up to the point where one stops caring what’s going on at the beginning of each sequence. The rapid tone especially causes a disservice to the fight sequences as blows never really land with any sense of force. Consider it a sugar rush of shoddy direction. There is also a prologue element of the story involving the tragic death of Walter’s mother (not shown, just referenced in the present day) as a heroic police officer voiced by Rachel Brosnahan, that feels like a tool for character development rather than an organic storytelling aspect.

Spies in Disguise has multiple directors and writers (it is billed as being from the creators of Ice Age, which should give some idea of what to expect), so I suppose it’s not too surprising that not much of it connects all too well. If the film had the confidence to dial in on the labels of heroes and villains and the complex dynamics they share, it would have functioned as something refreshing and positively challenging for both kids and adults. What’s more focused on is run-of-the-mill modern-day animated fare, but it’s also hard to say no to Tom Holland and Will Smith playing off of one another