Ricky Church reviews the fifth episode of The Mandalorian, ‘The Gunslinger’…

While not as exciting or introspective as the previous episodes have been, The Mandalorian‘s ‘The Gunslinger’ was still an entertaining chapter in the Star Wars series with plenty of nods to several of the films. The one action scene in the middle provided a nice, tense sequence though the one element that was rather negative was how underutilized Ming-Na Wen ultimately was.

‘The Gunslinger’ saw Mando go to the planet that started it all: Tatooine. The return to Luke Skywalker’s home planet was very welcome and held plenty of Easter eggs for fans showing how much had changed on the desert planet. Not only were the streets littered with Stormtrooper helmets on pikes, but the famous Mos Eisley cantina returned as well, though once where Luke was told it didn’t serve droids it now seems to be run by a droid itself. It’s also where Mando meets Toro Calican, a pretty green and wannabe bounty hunter played by Jake Cannavale. The fact Mando meets Toro in the very same booth audiences were introduced to Han Solo, sitting in his seat no less, is an extra bit of fun at the arrogance Toro exudes despite being such a newbie and thinking he can take a high target client like Wen’s assassin.

Cannavale’s performance was good for the most part. He definitely captured Toro’s arrogance and nervousness throughout the episode and his betrayal of Mando was also good if a bit predictable. However, he wasn’t a very compelling character unlike others who have only appeared in one or two episodes thus far, like Carl Weather’s Greef Carga, Gina Carano’s Cara or even Julie Jones’ Omera. The balance between making Toro an eager bounty hunter and a slapstick character wasn’t that great either as he was on the edge of annoying, but to be fair that may have been the point as well. Even without trying to kill Mando and taking Baby Yoda, there wouldn’t have been much lost when he met his end. 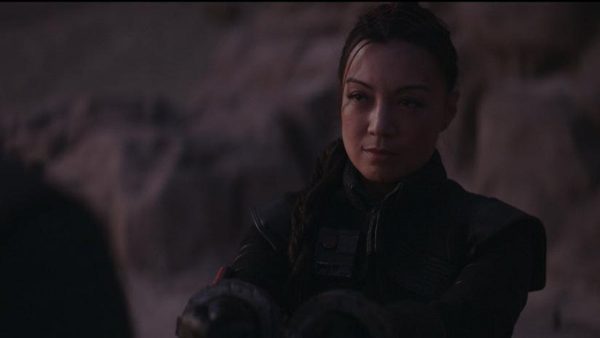 Which is where the major sticking point of ‘The Gunslinger’ comes in. Ming-Na Wen’s assassin Fennec Shand was made to be a big deal by Mando and on that front she at least delivered by briefly outsmarting Mando and Toro with her trap, even managing to land a couple shots on Mando. She showed how capable she was in this and her fight with Toro, though he definitely was not a challenge for her. The sequence where the hunters charged her sniper position and used flares against her was the most exciting part of the episode and was well shot. However, despite Shand’s deadly skill and Wen’s presence in her performance, she was still underused and what followed after her capture is very disappointing.

The fact Shand was killed by Toro after she tried manipulating him and let him know just how much Mando and Baby Yoda are worth to the Guild over herself is a wasted opportunity to have Wen as a recurring antagonist, one who is just as capable and deadly as Mando. She gave a good performance, displaying the coldness and tactful nature of her character pretty well in such a short time. Her death also wasn’t as shocking as the story tried making it out to be as it became quite clear what choice Toro would make long before Shand finished her pitch. Hopefully, though, that isn’t the last we see of her as the closing moments teased there may be more in store despite her apparent death. 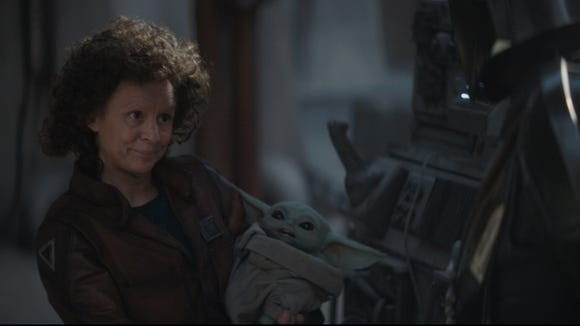 Directed and written once again by The Clone Wars‘ Dave Filoni, the story moved pretty quickly and the balance between some of the drama and humour worked for the most part, though, as said, Toro’s character was on the edge of overdoing it several times. Amy Sedaris was a welcome part to the series as a deckhand who decided to look after Baby Yoda (and a moment that spoke to Pedro Pascal’s performance as he became utterly worried and angry by what may have happened to him) and delivered a lot of humour nicely. The hints to the greater Star Wars franchise, like the cantina, the return of the prequel’s Pit Droids, or even Sedaris’ Ellen Ripley-inspired look, was a nice touch too. Filoni’s second episode wasn’t as strong as the premiere and some elements of the humour could have been scaled back with Wen given more to do, but it was still a nice addition to the series.

Toro’s character and Shand’s fate may have dragged the episode down a bit, but ‘The Gunslinger’ was still entertaining. The speeder bike sequence provided a nice bit of tension and the return to Tatooine was cool. Filoni directed a good episode, though could have balanced some of the more humourous elements a bit better, but still got good performances out of the cast. Wen’s brief performance as Shand was the best aspect to the episode which makes her fate that much worse. Hopefully it won’t be long before we see her turn up again if that tease is any indication.