Like this month, January 1990 was the first month of a brand new decade, one filled with the promise of new games, new technology and hours of enjoyment to be had.  This new feature series looks at games we were playing back during the appropriate month all those many happy gaming years ago.  Just to point out, these are games we were playing that were released roughly around January but not necessarily in that month. 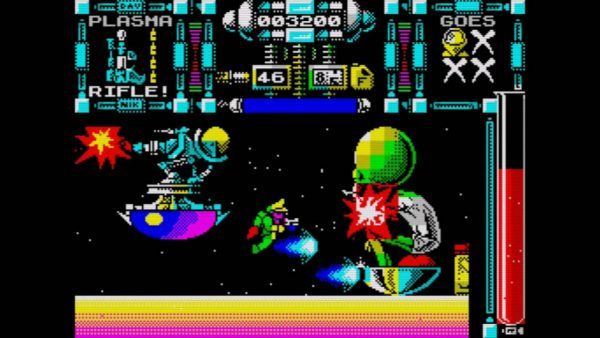 This third title in the popular Dan Dare series was released on the major British 8-bit and 16-bit computers of the day and saw affable British space hero, Dan Dare, once more venture into space to fight the Mekon and his Treen army.  The game saw Dan’s green arch nemesis once more trying to take control of the Earth by using genetic manipulation to create a more subservient people but who does he use as his guinea pig? Only the blummin’ hero that has thwarted every single one of his plans to date.

In order to save Dan from becoming a mutant players moved him through a series of screens and levels searching for the 50lb of fuel needed to power his rocket ship back to Earth.  Though that isn’t as easy a task as it sounds as standing in his way are hordes of Treens, auto turrets and the Mekon himself.  Armed with his trusty plasma rifle Dan will need to navigate the screens and teleport between levels to once more foil the Mekon’s plans.

On the Spectrum the game scored incredibly well, earning itself a Crash Smash at 92% and a Sinclair User Classic at 93%.  However, it scored just above average on the 16 bit computers with Amiga Format awarding it 67%. 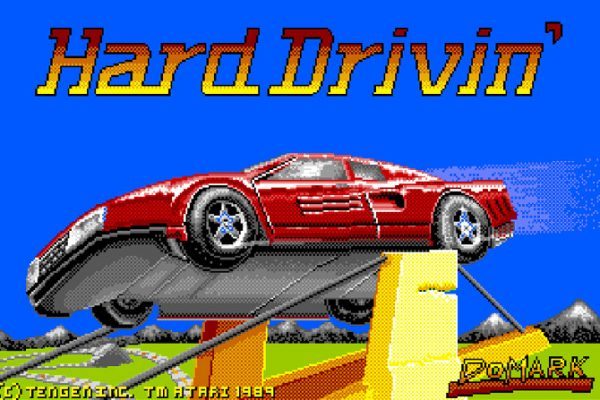 Although released in the December of 1989 on both 8-bit and 16-bit systems, this classic racing game from Domark was guaranteed to be played regularly throughout January, especially after Crash awarded it a Crash Smash 92% and ACE Magazine gave it a whopping score of 937, in their Jan’ issues.

This driving simulator provided two tracks for players to race around, there was the standard road style of track that you could have a proper Sunday drive around then there was the stunt track with tight corners, jumps and a loop-the-loop.  Personally, I nearly always opted for the stunt track but very seldom managed to make the loop on the first try and ended up crashing.  However, crashing was all part of the fun thanks to a handy replay feature that gave you an external view of your driving to that point.

With addictive gameplay in a 3D polygon environment this game proved to be super popular on nearly all platforms, even earning itself a release on the GameCube, PlayStation 2 and Xbox as part of the Midway Arcade Treasures 2 collection in 2004.

The video below (kindly provided by Steve Benway) shows gameplay from the Spectrum version.

It Came From The Desert

A quote from Archer suits this game perfectly, “Do you want ants? Because that’s how you get ants!”.  Cinemaware’s It Came From The Desert is an action/ arcade/ strategy 16-bit game loosely based on the 1954 Warner Bros. movie Them! which saw a small American desert town fighting off swarms of giant ants.  It is a game so fondly remembered that it even lead to a 2017 film going by the same name.

Taking the role of a scientist, players had to go from location to location convincing people about the looming ant problem.  There were numerous different arcade sections of the game, including escaping from hospital, flying a crop duster over giant ant nests, knife fights with local greasers and running around the desert shooting at ants with six shooters, and all were excellently executed.  Get far enough into the game and the ants would appear at locations resulting in a first person shoot out that had players shooting the antennae of the ant within a set time.

Finally, at the very end of the game all your persuading will result in a major battle as the ants invade the town and this is where the strategy element comes in to play as you position your available troops around the town.  Do well at persuading people of the threat and you can control locals, police and the military with their tanks, don’t do well at persuasion and you may find yourself overwhelmed.

Zero magazine and Amiga Action both scored the game a deserving 91% while CU Amiga gave it an outstanding 96%. 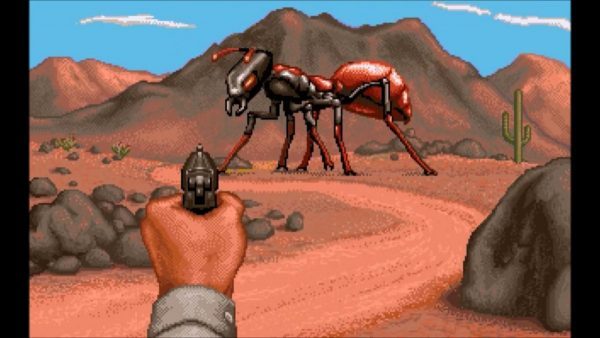 Side-scrolling beat ’em up Double Dragon II: The Revenge saw the return of brothers Billy and Jimmy Lee as they set out to avenge the murder of Marian (the damsel in distress from the first Double Dragon) by the gun-toting boss of the Black Warriors gang (also from the original game).  As with the first Double Dragon, players moved their character through a number of different environments fighting a variety of different enemies and finishing each level with a super hard boss that had many players tearing their hair out.

The original Double Dragon sold lots but there seemed to be a fair old bit of disappointment that it didn’t live up to the arcade, however Double Dragon II managed to garner above average reviews, scoring 87/100 in Sinclair User, 77/100 in Your Sinclair and Zzap!64 giving the C64 version 72% and the Amiga version a slightly lower score of 67%.

It should be pointed out that this game wasn’t released in January but it was given away on the cover tape with Crash magazine in that month.  For younger readers, back in the day magazines would give free games, demos etc. away with the magazines and these tapes often had some little gems on them.  Action Biker, or to give it its full name KP Skips Action Biker with Clumsy Colin was one of these little gems.

Born from a partnership between a UK snack company, KP, and developer Mastertronic, Action Biker was a simple and fun little game that had players guide Clumsy Colin around Clumsy Town to help find 50 items to help hurl his friend Marti into space.  Colin’s bike only had a limited amount of fuel but this could be boosted by finding packets of KP Skips crisps.

As with the real life snack you either liked it or you didn’t.  Personally I liked it, as did the reviewer at Zzap!64 who awarded it 83%. 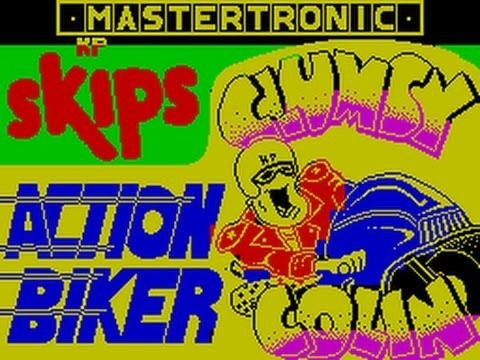 Battle Squadron: The Destruction Of The Barrax Empire

Electronic Zoo’s vertical scrolling shoot ’em ups was without a doubt one of the best to grace the 16-bit Amiga computer and SEGA Mega Drive.  As with the majority of vertical scrolling shoot ’em ups of the day, players went up against a massive fleet of space fighters, land based anti-aircraft vehicles and stationary turrets as the powers that be had deemed a single hero (or two heroes if playing with a friend) sufficient enough for the task.  Armed with a small laser weapon and 3 smart bombs, players would fly into enemy territory destroying as many enemies as possible, fortunately there would be plenty of power ups that provided different weapons to that of the small laser and by collecting more of that particular power up you could urn what was a weedy weapon into an epic weapon of mass destruction.

The game featured bright and colourful backgrounds that didn’t interfere with seeing the incoming enemies, nicely designed enemies and big bosses and the music was phenomenal.

CU Amiga awarded the game with 79%, While Amiga Computing lavished huge praise on it with a score of 109% (seriously, look here!). 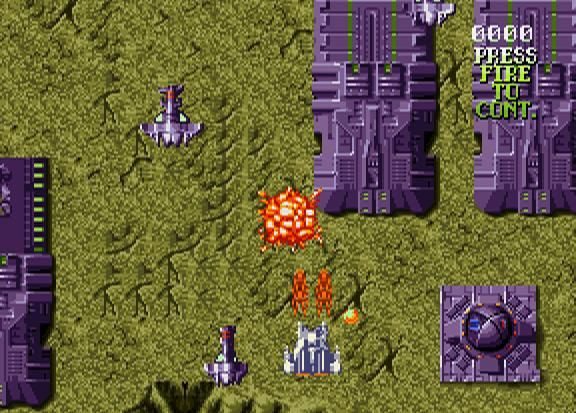 The 1980s and 90s were great years for gaming and each month we’ll be looking at more games we were playing 30 odd years ago.  Special thanks once again to Steve Benway for allowing us to use his videos and be sure to subscribe to him if you haven’t already.