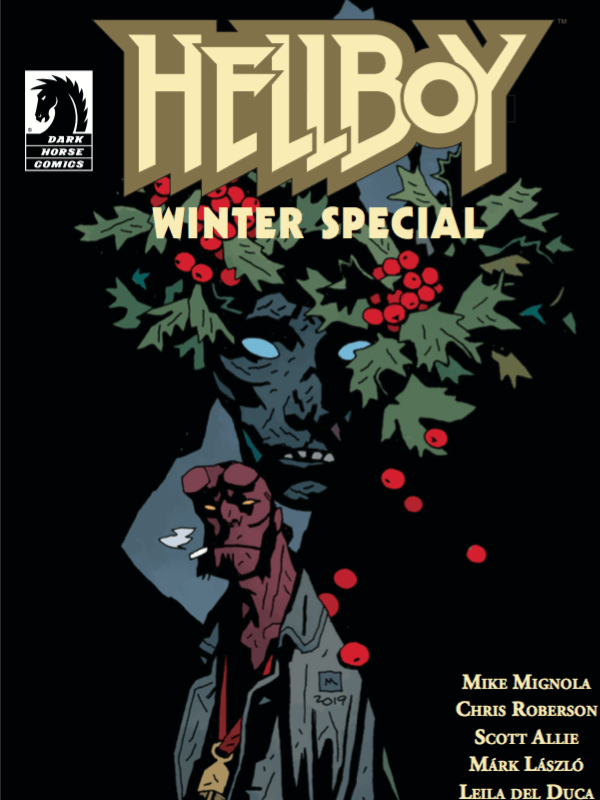 The first story comes from Mike Mignola himself and is a return to form for those gasping for some classic tales of the demon crusader. The Miser’s Gift sees Hellboy drinking in a Budapest bar being told a story about a ghostly street that seemingly disappears and reappears at random. And while it’s never terrifying like some of Mignola’s early work – the story feels excitingly ethereal. The sense of adventure the story exudes feels closer to something like The Goonies mixed with a parable tale in the vein of A Christmas Carol.

The art in The Miser’s Gift by Mark Laszlo with colours by Dave Stewart allow an exploration of Hellboy in a new setting with ease, but without feeling too closely tied to the original stories from Mignola. Interestingly the way the ghostly spectre haunting Budapest seems to stem from the city itself has underlying sense of dread as he drags his heels through each panel fills the reader with an uneasy dread for his unwitting assistant. Both artists’ talents are particularly let loose when the Miser’s fiery rage is unleashed. It’s an excellent short story that reminds long-time Hellboy readers just how fascinating this world can be away from the larger tales.

But for those expecting a trio of stories solely focusing on Hellboy, there might be some disappointment. The other two stories in the Hellboy Winter Special use the opportunity to explore new monsters in the mythology. The Longest Night is written by Chris Roberson, and is a claustrophobic murder-mystery-whodunnit, with a monstrous twist. And although it at first seem predictable, like any good mystery there’s a trick up its sleeve. The easiest way to describe Roberson’s The Longest Night, is picture the finale of any good murder mystery, when the detective reveals all – but like any good story from the Mignolaverse, this one has something truly haunting at its core. It follows a pair of detectives uncovering a murder that  may or may not have ties to a demonic presence stalking upstate New York, 1921. It’s here that the art from Leila Del Duca and the colours by Michelle Madsen really excel – without ruining anything, you don’t want to go out in the woods today…

The final tale comes from Scott Allie, The Beast of Ingelheim. And although it might not be as terrifying as the other two, it offers a moral quandary that three men of God find themselves under when continuing their hunt for supernatural threats. Johannes Von Burg reveals how his viciously brutal actions defend their world, but often contradict their own beliefs. While The Beast of Ingelheim never relishes in over-the-top violence or gratuitous horror, it’s the mere suggestion of what these men plan to do that proves genuinely chilling. And with stunning art and colours from Andrea Mutti and Lee Loughbridge (one panel in particular towards the end of the the final tale is incredibly ominous) the issue works an absolute treat.

A special mention also needs to go out to the letterer of the issue, Clem Robbins, whose work really makes each tale leap off the page. Whether it’s the rage-fuelled screams of a ghostly miser, or the impactful narration from Johannes Von Burg, each line is expertly delivered.

So while the Hellboy Winter Special doesn’t give those readers hungry for a whole host of Hellboy goodness a huge amount of the devilish hero, it delivers three horrifically fascinating narrative tales that crawl their way across each page with ghoulish delight. It’s a great read for horror fans and longtime Hellboy readers alike.