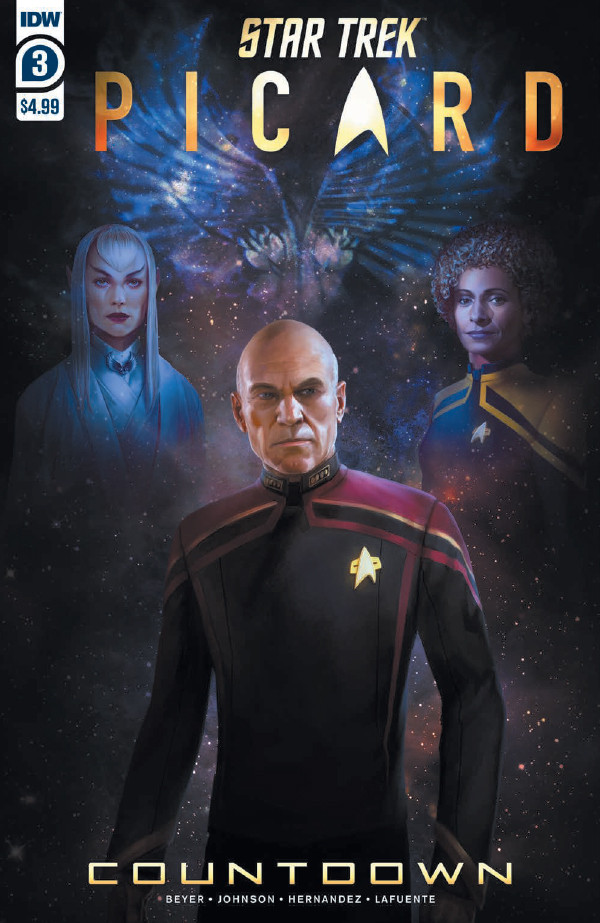 And so we come to the final slice of Star Trek: Picard – Countdown.  This three issue special, written by Kirsten Beyer and Mike Johnson, aimed to give us a glimpse into the universe of the retired Admiral Picard.  The comic book special written to show us the path Admiral Picard had once trodden, the one that brought him to the gates of the Picard Vineyard.  So did Johnson and Beyer achieve this in a three issue blast?  Well you’ll have to read on to find out…

With the Governor of Yuyat Beta attempting to seize control of the USS Verity one room at a time, on the planet below both Picard and his first officer Lt. Cmdr. Raffi Musiker, along with the undercover Tal Shiar agents Laris and Zhaban help regain control of the uprising in their favour.  Then, with a brief on-screen trading of barbs between both the Governor and Picard, plus some quick thinking from Lt. Marcia aboard the Verity, the Romulan intruders are transported to the brig.

However, this nightmare of a day isn’t over for Picard and company as the Romulan Empire – especially the Tal Shiar – have one more ace up their sleeve.

Issue #3 of Star Trek: Picard – Countdown has arrived firmly after the premiere of Picard has streamed across the globe.  We the readers knew this was going to happen and this led to a fair few of us Trekkies to summarise that whatever was going to be happening within these pages was going to feature greatly within the pilot of Picard the TV series.  So when I started reading I honestly expected to see Romluans corrupting Synths – on Yuyat Beta – then sending them out towards Mars.  This didn’t happen at all!  What we did get was the unfolding Romulan story being capped off.

On my first read this knocked me for six.  Completely unexpected, I felt slightly empty at its conclusion, but then as I thought about what was playing out in regards to the Tal Shair and how Starfleet are now viewed ten years on, it all started to fall into place.  Strangely I actually mentioned something similar on a Star Trek Facebook group just the other day. The Tal Shair make sure their brightest and the best are moved on, they don’t want Starfleet to find all of their dirty little secrets, they want Starfleet to look like the bad guys, and so its time to make major sacrifices across the Empire.

There is an awful lot packed into this one final issue, more than I actually expected, and perhaps too much.  The wrap up of the “big bad” Governor seemed to be a blink and you’ll miss it, the conclusion of the rebellion was achieved in – what felt like – a few panels, everything was crammed into the covers and it was left to faith alone to stop it spilling out all over the place.  Maybe four issues of Star Trek: Picard – Countdown would have delivered this story with a much neater bow on top.

That being said Star Trek: Picard – Countdown has been a good series from start to finish, with the writing team of Kirsten Beyer, Mike Johnson tapping into their years of Trek knowledge and leaving enough breadcrumbs to show what’s possibly in store for season one of Star Trek: Picard.  On top of this the constantly strong artwork and colours for Angel Hernandez and Joana Lafuente has made this series an absolute please to read.