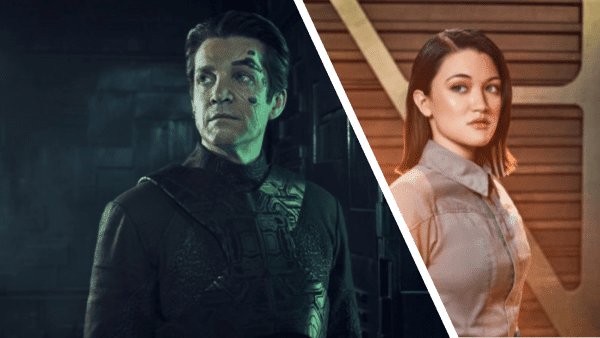 Isa Briones and Jonathan Del Arco have something in common: they were both in Star Trek in their twenties.

Jonathan Del Arco, of course, played Hugh – a Borg who becomes self-aware – back in The Next Generation. Isa Briones, meanwhile, is playing Dahj, a mysterious new character at the heart of Star Trek: Picard.

They’re both approaching Star Trek: Picard, then, from opposite ends. “I tell [the actors newly joining Star Trek] their life is going to change, because it is. In a great way!” laughed Jonathan Del Arco.

“The Star Trek actors, we see each other practically every weekend for conventions here or there. You’re at some weird hotel in some weird town and you all have to go eat. So we hang out with each other. It depends on the city, but it’s not always a good meal! But yeah, the whole Star Trek family is exactly that. It’s very interconnected and welcoming.”

“It felt like we were all old pals,” agrees Isa Briones, recalling a day’s filming with Patrick Stewart, Jonathan Frakes and Marina Sirtis, when Michael Dorn and LeVar Burton both came to visit. “They were telling me stories of The Next Generation! They were just like, ‘Isa, sit down. Oh my God, you remember that?’ That was kind of the theme of the entire filming experience. We were all taken in so wholeheartedly, and we have a great family.”

It’s not so different from Jonathan Del Arco’s recollections of The Next Generation either. “Patrick and Whoopi were both mom and dad on Next Gen. They just could not have been lovelier, kinder, more gracious… and Patrick is that in spades today! We’re very lucky. We have a great Captain!” 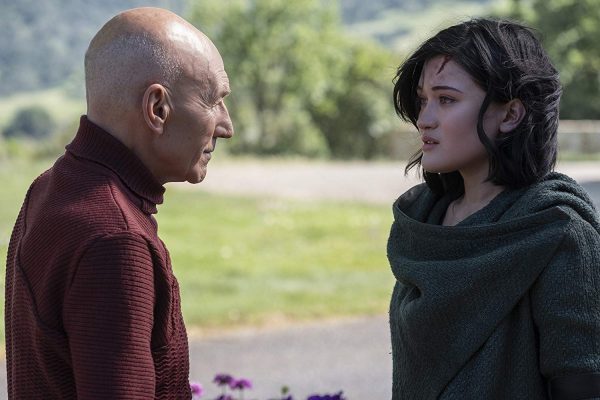 As Isa says, though, it’s not every day you become part of something already so well-established. But with that must come some sort of trepidation – especially so early in her career, knowing this might well become her defining role?

“When you haven’t done much you will take any role that’s given to you,” laughs Isa Briones. “But I also didn’t know what this role was going to be. I was just auditioning and I was told it was Star Trek. I wasn’t really told that she was going to be this involved until the last call back. It really was a lesson, like, you’d never know how life is going to turn out and timing is everything… I always just cite my father. My father has been in the business a while, working his ass off for so long, but he finally started getting known at 50 years old. Now this is happening for me at 20, so anything is possible at any time. You roll with the punches, you take what comes your way.”

“She’s also an incredibly confident actor and performer, a great singer as well,” says Jonathan Del Arco, praising his co-star. “You always seem incredibly competent to me, from the day I met you. I think you were born for the part.”

He’s not wrong: a lot of that first episode hinges on Dahj – more on whom in a moment – and, more important, on Isa Briones’ performance. Star Trek: Picard wouldn’t be anywhere near as good as it is without her. It’s pretty good going for an actor who only turned 21 the day after our interview.

“I really applaud Alex and Akiva and Michael [Kurtzman, Goldsman and Chabon, three of Star Trek: Picard’s executive producers] for taking a chance on someone they really didn’t know could deal with all of this,” says Isa Briones. “They took a chance and thank God because yeah, I didn’t realise just how heavily involved I was going to be. And really it did take me by surprise. The first day I ever worked on set was that scene in the vineyard where I’m crying and bleeding. I was so nervous and almost felt like, ‘Oh my God, I can’t do this. I can’t do this’. But the reason I could get through was because of Patrick, because he stayed there and just held my hand and was looking in my eyes and just giving me so much. That’s the reason we’re all here.” 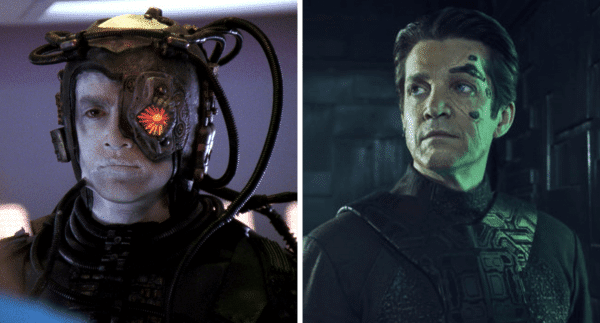 Let’s rewind, though. Who actually is Dahj?

“She is starting a new chapter in her life, and everything seems to be going pretty great until a horrible tragic incident occurs,” says Isa Briones, explaining her character without actually revealing any details about who she is (because that’d be far too easy). “She suddenly has no idea who she can trust and does not trust herself, is questioning her identity, and goes to Picard.”

It’s this that draws Picard out of retirement, the catalyst that sets Star Trek: Picard into motion. “Dahj is going to him for help, but in the end, they’re both in need of help. As much as he is trying to help her, she’s giving him a reason to live again. He’s just been waiting to die, as he says in the show, and now he has a reason to do something. We both help each other in that way,” reveals Isa Briones, explaining the relationship between Dahj and Picard.

Hugh, meanwhile, has changed since we last saw him, almost becoming something of a revolutionary leader. “He’s had to make some difficult choices in the world we’re in. He’s doing the best he can under the circumstances to keep his people safe and alive – but with that comes some really hard compromises for him that eat at him. I think he’s in a really rough position in his life right now, trying to balance out how to do the most good at the worst time. Sometimes I feel that way myself!”

It’s this that attracted Jonathan Del Arco to reviving the character. “In a strange way, when I first played him in my 20s I was playing someone else that inspired Hugh. This time around I’m fully using my own life,” explains Jonathan Del Arco. “He’s not hardened though. The vulnerability is very much still there. I would say deeper than it used to be, because his awareness has grown as a person. I like to think that mine has as well!” 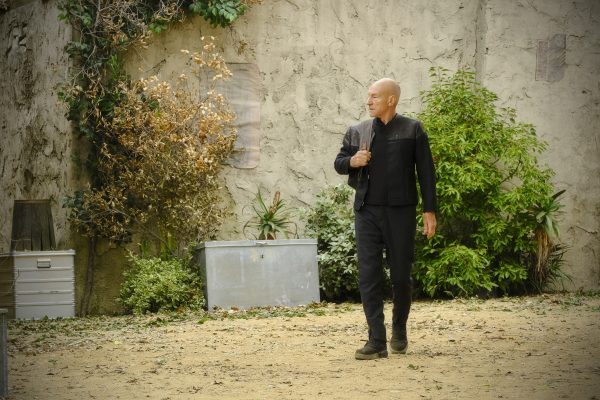 With that in mind, then, how does Star Trek: Picard differ from previous iterations of the series? Star Trek has always drawn on a very particular version of 1960s utopianism – what does that look like in 2020?

“Well, [Star Trek] was rooted in the view that the future would be progressive and rosy. Surprise, it’s not!” laughs Jonathan Del Arco. (They’re both, in case it wasn’t clear, very upbeat, very charming people – it’s a lot of fun just to be around them.)

“I mean, we all have iPhones and flip phones and all the things that Star Trek brought forth. But I think in a way [Star Trek: Picard] is much more in keeping with the kind of genres that exist now in film and television, which are explorations – in a fictitious way – of what we’re living through. This explores that, but in more of a deeper way,” he elaborates, explaining how the new series will, as many of his co-stars have noted, touch on contemporary issues.

I feel like one thing that I’ve really noticed is, I think, in the past of Star Trek – and many sci fi or superhero properties – people are always looking at this wonderful leader, someone that is perfect and can lead you into the future,” suggests Isa Briones. “Of course, we have a wonderful leader [in Patrick Stewart and in Picard], but what I think is the trend now is we’re done seeing that story of the perfect person who can solve everything. We want to see them as people. We want to see them be humans and make mistakes.”

“I think that is what we are definitely bringing into this show: we’re seeing the almighty Picard, but he’s retired and he’s unhappy. He’s just like any real-life person would be, and you’re seeing a young woman, who should be at a great stage in her life and now she’s on the run and she’s scared. You’re seeing so many conflicting stories because that is the reality of the world we live in. There’s not always going to be a perfect person who’s going to solve everything. Go. It’s complicated.”

She’s not wrong. It is complicated. But it’s also a Star Trek that speaks to 2020 – and that’s exactly what we need right now.

Come back tomorrow for our final Star Trek: Picard interview, this time with executive producers Michael Chabon, Alex Kurtzman, Akiva Goldsman and Kirsten Beyer. Meanwhile, you can find our interview with Patrick Stewart and Jeri Ryan here, and our interview with Michelle Hurd, Harry Treadaway and Evan Evagora here. Or, take a look at Ricky Church’s latest ‘Essential Picard’ here.