While the adventures of The Next Generation crew didn’t end with its series finale, ‘All Good Things…’ brought a sense of closure to Captain Picard and the Enterprise-D that was exciting, heartfelt and well-earned, bringing the series full circle to literally where it began. The finale encompasses much of what makes Star Trek great: an intriguing and intricate plot, crazy sci-fi, great characters and a philosophical look at the struggle they go through. Even without being the final time we’d see Picard and his crew, ‘All Good Things…’ is a more than worthy send off for them. 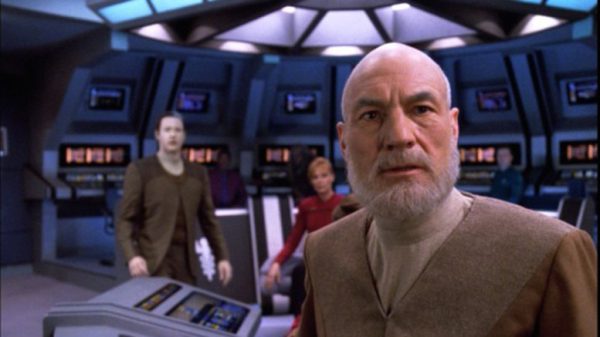 Picard finds himself somehow travelling between three points in time: his current present, his first day as the Enterprise’s captain on their way to Farpoint Station and 25 years into the future where he is a retired ambassador and everyone from the Enterprise has moved onto other posts. There is seemingly no explanation for Picard’s shifts through time except for a spacial anomaly that seems to be in each timeline and the reappearance of Q. As Q explains, the anomaly threatens humanity’s existence, but it is not he who is the cause of it: rather, Picard will be responsible for wiping out humanity. He and the Enterprise have to figure out what is happening and how to stop it before all life is destroyed.

Though ‘All Good Things…’ centres around the entire TNG cast, Picard is given the most focus of all of them as he is the apparent root cause of humanity’s coming destruction. Seeing him in three different points in time speaks to how far he has travelled in his personal journey as he’s grown attached to each member of his senior staff. The Picard of the future is one who has come a long way from the days when he first gained the Enterprise and has come full circle in his own life. No longer living life on a starship, Picard finds comfort in running a wine vineyard of his own, the very sort of life he ran from in his youth as revealed in ‘Family‘ and apparently one fact of the future to come true given the trailers for Star Trek: Picard. Even the way he interacts with his ex-crew members in the future is more personable than he currently is, especially with the reveal he and Dr. Crusher were married at one point in their later life. 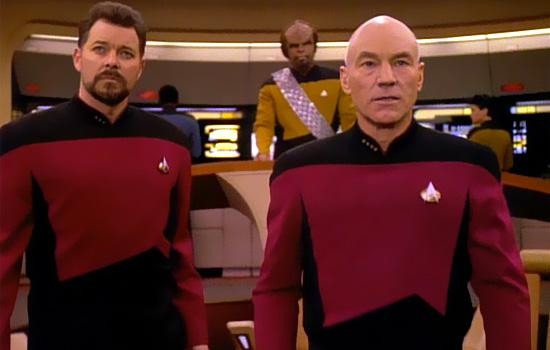 Picard himself is quite vulnerable throughout the finale. At first there’s uncertainty over what is happening to him or exactly if it is happening to him as he reveals he could possibly have a neurological disorder that causes confusion and hallucinations. It’s quite tense to see how Picard deals with the crisis in each of the timelines as the crew in the past believe he is acting very erratically and aren’t sure they can trust him, seeing as its their first mission together, while everyone in the future believes there is a strong possibility it’s all in his head. Stewart gives a terrific performance as Picard, but particularly as the older version of the character. Even though he has the same consciousness as he drifts through each period, the older Picard is quite distinguishable in his mannerisms and speech, making it amusing to hear him sound like a grouchy old man yelling at kids to get off his lawn at times.

With the knowledge that Picard unwittingly sets the anomaly in motion, allowing it to travel back in time and prevent any life from being created, his success lies entirely on the trust he’s cultivated with his crew. Even in the past, when Troi, Data and even Tasha Yar don’t know him, he’s able to get them behind him in a potential sacrifice with a rousing speech. And though it takes a little while for everyone in the future to believe Picard’s worries, the finale strongly implies they all drifted apart because he was the glue that held them together and while Picard would make a perfectly fine ambassador, his place, much like Captain Kirk before him, is in the captain’s chair of a starship exploring the unknown. 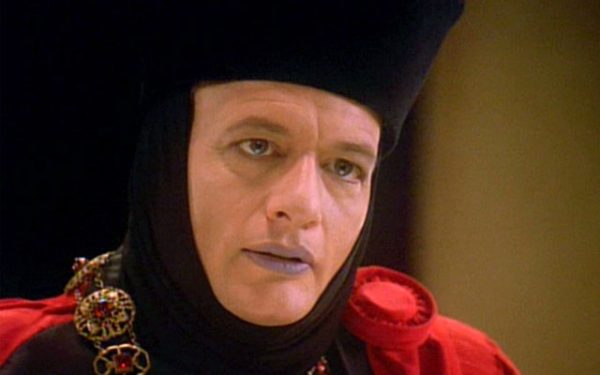 And that, in the end, appears to be the lesson Q was trying to impart to Picard. He may have started out as an adversary but over time he’s acted as a ‘friend’ to Picard and even helped him on a few occasions, like possibly warning him the Borg were coming or getting him to accept his past mistakes as in ‘Tapestry‘, and he does so again here. Though he got his orders to give Picard a test to figure out, Q found a little loophole (or perhaps made it himself) that allowed him to gently nudge Picard in the right direction should he need it.

Star Trek has always been about discovering the galaxy and finding new life, but it has also delved very much into philosophy, a fact shown once again when Q leaves Picard with a different thought to explore: The real journey is not through the stars, but through the mind and discovering new limits and possibilities to existence. It’s something that, despite all of the Federation’s technological advancements and galactic navigation, they still have more to learn of. But, as in perfectly Q fashion, he leaves it to Picard to discover himself.

It goes without saying that while Stewart excels as Picard, the rest of the cast do as well. Jonathan Frakes, Marina Sirtis, Michael Dorn, LeVar Burton, Gates McFadden and Brent Spiner do great work throughout the episode, particularly Spiner as he has to revert to Season 1 Data, where he is still very robotic in his personality, and act as a completely different and lively Data in the future. It is also nice to to see the return of Denise Crosby as Tasha as well as Colm Meaney as Miles O’Brien, who at this point moved onto Deep Space Nine. John de Lancie also steals whichever scene he’s in as he portrays Q’s mischievous characteristics while appearing, perhaps for the very first time ever, sincere to Picard in his final scene. Everyone brings their A-game and though the cast would begin production on their first feature film, Star Trek: Generations, just 10 days after wrapping this, they still treat the series finale with the gravity it deserves. 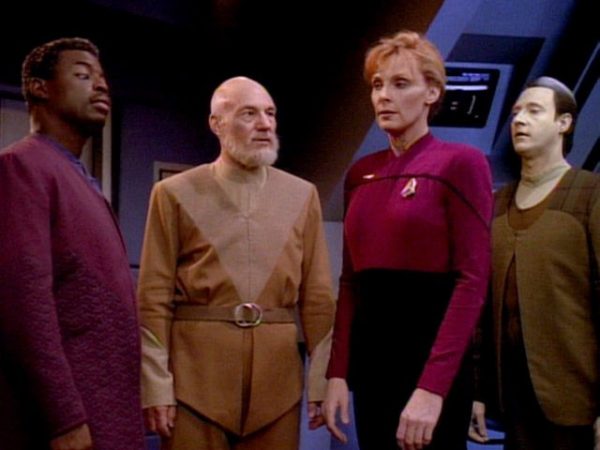 ‘All Good Things…’ is not just a great series finale for The Next Generation, it is great Star Trek period. Its focus on the crazy time travel sci-fi concept is perfectly in line with the franchise, but its dose of philosophical musings on the type of journeys humanity should prioritize makes it a meaningful episode to deconstruct. Make no mistake, this is one of Jean-Luc Picard’s finest moments as he navigates through Q’s complicated lesson. With the performances from Stewart and the cast and emphasis on Picard’s development from his first day as the Enterprise’s captain to his older years, ‘All Good Things…’ is essential for any watch of Star Trek.