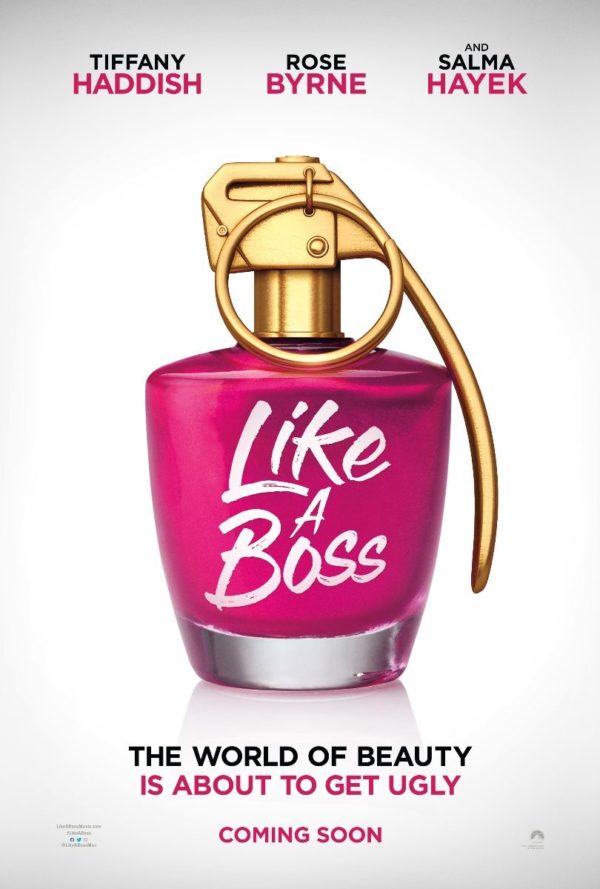 Two friends with very different ideals start a beauty company together. One is more practical while the other wants to earn her fortune and live a lavish lifestyle.

Rather than review Like a Boss, it feels more fitting to just a list of the ways the female-centric yet all-male directed and written (although Danielle Sanchez-Witzel is credited with coming up with the story, which makes sense because this movie is only empowering two women at the most basic level and in desperate need of some woman in the writers room) lowbrow comedy (and Hollywood at large) embarrass Tiffany Haddish. She deserves a newly instated honorary award for the lengths she is willing to go for a laugh here.

There must be three different dialogue exchanges alone focused on random sex talk that is neither enlightening nor funny (if you really want something funny coming from that perspective, check out Olivia Wilde’s Booksmart); Mia (Tiffany Haddish) rises out of bed detailing a dream about fucking Barack Obama (the funniest thing about Like a Boss would be if the former president finds a way to acknowledge that in his always rock-solid best of the year lists), lectures a nerdy highschooler/makeup client about the disappointment that comes with prom night sex, and probably something else I can’t even remember. That’s also a good thing; I hope the rest of the film leaves my brain just as quickly. The atrocious sexual humor is not just limited to the first 15 minutes, as at one point Mel is about to fall off a staircase multiple stories down to the floor but not before someone rescues her inadvertently pulling her from the feet into a somewhat sexual position. “How did you know that’s my favorite position”, she replies.

The scene where she acts out a horrific reaction to an abundance of ghost peppers is not much better. For some reason, the writers liked it, as the follow-up scene shows Mel on the toilet commenting on the pain of pushing that out of her system. Since the phone finds poop jokes funny, here is one: stop giving Tiffany Haddish diarrhea for material to work with and expecting her to polish it off without still smiling. 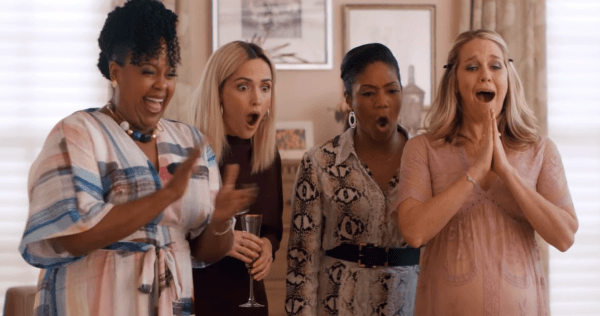 Nevertheless, the story follows Mia (Rose Byrne) and Mel, two childhood friends that now live together and own their own cosmetics business. Unfortunately, the duo is quickly going into debt. Fortunately, they are good at what they do, prompting Salma Hayek’s industrial powerhouse and walking stereotype Claire to propose a buy-out. If the movie does anything right, it’s openly transparent that she’s going to be a villain and cause a rift between the long-standing friendship, but it’s also downright appalling at how low the humor goes to get a joke at her expense; everything from crazy wigs to pointing fun at her speech to even bringing her large boobs into the mix. Yes, at one point she and Jennifer Coolidge’s depressed loner divorcé fight each other with their boobs.

Anyway, there’s immediately friction as Mel prefers the freedom that comes with running one’s own business while Mia is excited for a huge payday that will allow them more comfortable living circumstances. The race of these characters also seems intentional, as the prospect of a black woman wanting to keep her freedom intact and not trust larger corporations feels like a bigger discussion waiting to happen, juxtaposed with the more privileged Mia. Admittedly, Mel does come from a little bit more money (she inherited a house from her dead mother) and gave her friend a place to live, but the dynamic between what each of these people wants for their home-grown business is something positive to mention.

If there are any laughs to be found, it’s from Billy Porter as a gay coworker that, while overly flamboyant, puts in some scene-stealing work, notably at the moment he is handed bad news from Mia and Mel. Elsewhere, Karan Soni has a strange role as Claire’s assistant that consists of him putting on awkward facial expressions in the background whenever all three women converse. A couple of them are also probably the only way an audience will relate to this movie (there are some really out-there lines of dialogue that are confusing and lead to questions for the writers rather than funny). There’s also a pair of chauvinistic male friends doing some equally chauvinistic things with their own line of beauty products, making for another hurdle for the best friends.

To be honest, it doesn’t really matter that the entire plot is telegraphed just from looking at the poster. No, what matters is that Like a Boss is irritating for pretty much every second of its gaunt 83 minutes running time. Not to mention, it’s about as fake and phony as female empowerment stories get. Sure, the intentions are there, but this is an awful script with messy direction (there must be three different climaxes). It’s painful seeing the talent try to make this funny. If you are not the boss of what you or your significant other or family see at the movies, take ownership of those decisions now and stay far away.